Google today rolled out a refreshed look-and-feel for its Developer Program Policy Center, aimed at making its guidelines for app developers easier to locate, read through and understand. The revamp includes a visual makeover utilizing Google’s own, colorful “Material Design” to organize the policies by themes like “Restricted Content” or “Privacy and Security,” for example. But it also includes updated rules, expanded information on policy enforcement to help resolve violations, as well as visual examples and detailed guidelines for the most common violations.

Though Google is less restrictive than Apple when it comes to the types of apps it allows on Google Play, it has stepped up its oversight over the years. The company quietly introduced an internal app review team in 2015, whose job involves scanning apps for policy violations. The company also automatically scans apps for malware and other content violations, like apps that contain sexual content or those that infringe on other applicants’ copyrights.

However, despite its having a set of guidelines informing developers what is and is not allowed on Google Play in terms of app content, behavior and use of advertising, many developers still see their apps rejected upon submission.

Google says its goal with the Developer Program Policy Center redesign is to improve how it communicates its policies to help developers avoid accidental pitfalls.

Now, instead of a text-based list of policies, the various sections are organized into colorful cards laid out on a grid pattern. This makes it easier for developers to find a particular section with just a glance, whether accessing the Policy Center from the desktop or a mobile device.

Then, as they dive into a given topic, the section may contain visual examples of what’s appropriate according to policy, along with more detailed guidelines.

Another key change is that Google has introduced an expanded section that details how its policies are enforced, so developers understand how to go about resolving violations when they come up.

This section before was a short paragraph pointing developers to a URL where they could contact Google about a removal or a concerning rating or comment from a user. It also stated that serious or repeated violations would result in account termination. 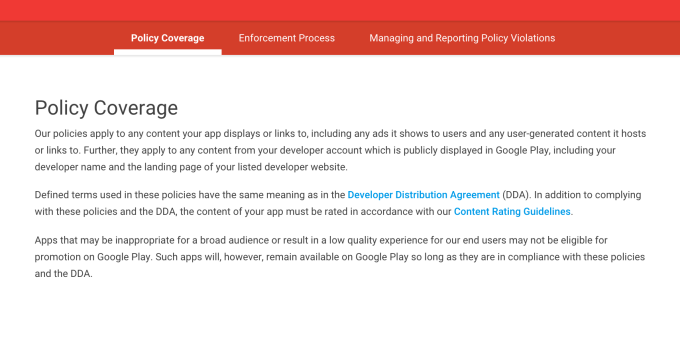 The new section offers more details on Google’s Policy, noting that apps that result in a low quality experience may not be eligible for promotion on Google Play, for example. It also details how policies are enforced and a section on “Managing and Reporting Violations” points to over a half-dozen help pages on related topics ranging from the app verification and appeals process to understanding account terminations.

By offering more detailed information on enforcement, Google is attempting to address one of developers’ top concerns with the app submission process: that is, when apps get booted from Google Play, developers don’t often understand the reasons why – even when pointed to the section they’ve violated.

Worse still is that their requests for help and better understanding seem to be met with form letter-style responses. (The same often holds true for Apple’s iTunes App Store.) With an expanded and more detailed section available that details how problems are dealt with and the resolution process, developers will have more information when things go wrong.

In addition to rolling out the new look for the Developer Program Policy Center, Google also took the time to update a few policies in accordance with current practices. In other words, even longtime app developers may want to take a look to see what’s changed.

For example, Google has updated its Ads policy to prohibit inappropriate ads, including those that interfere with device functionality. It has introduced restrictions on apps that bypass the system power management features under its Device and Network Abuse (e.g. those that claim to bring Doze-like functionality to non-Marshallow devices).

There may be other changes buried in there as well, but this will require a more careful read-through to discover them.

The change to the Policy Center isn’t one that will directly impact Google Play users, but by clarifying and simplifying its rules for a worldwide developer community, Google is hoping to increase the quality of the applications on its app store which sees over a billion visitors monthly.

The new policy center is live now, and developers are invited share their feedback about the changes.