Tower above your army of monsters, lean across the battlefield and make your opponent’s face explode. That’s Dragon Front, a virtual reality card game coming to Oculus Rift. While many VR games see you flailing your arms or head about, or swinging swords and shooting bows and arrows, Dragon Front is decidedly more chill.

That’s not to say it’s boring. In fact, it’s what could make Dragon Front so addictive. It’s easy to lose track of time as you summon warriors and attack your enemy’s fortress. Because Dragon Front won’t physically or mentally exhaust you with twitchy gameplay, you can sustain much longer sessions inside the headset. 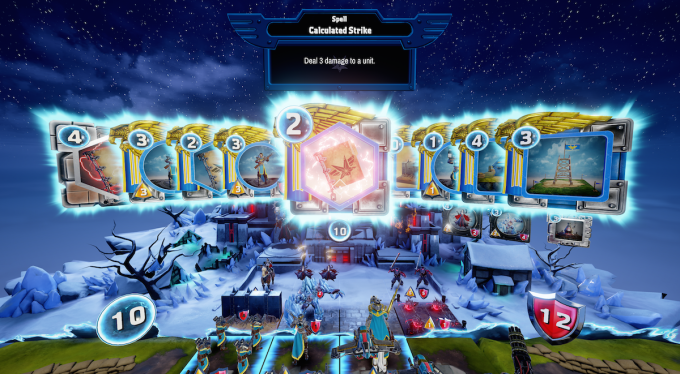 Developed by High Voltage, a 23-year-old game studio, Dragon Front will be available for Oculus Rift in Q2 2016, though not right at launch. The company previously worked on some of the Mortal Kombat games and will also release a first-person shooter called Damaged Core for Oculus.

In Dragon Front, you get cards with creatures and spells that you can play each turn as you try to destroy your enemy’s forces and their castle. You can play online against real humans from around the world.

To make Dragon Front feel like you’re interacting with a real, physical card game, High Voltage actually built one. It started with drawings on note cards, then they made cards, then prototypes of miniatures, before finally developing the VR game.

High Voltage’s Chief Creative Officer Eric Nofsinger tells me “We wanted to encapsulate the feeling of playing across the table from someone else…being able to lean forward and look at the table top with a sense of immediacy you don’t get out of a traditional 2D card game.”

That’s a slight dig at games like World of Warcraft’s Hearthstone for mobile, which has become insanely popular but locks all the action into a tiny screen. Dragon Front makes it happen all around you. Your fortress is splayed out beneath you. You can see a mask representing your opponent mimicking their real gestures as they peer at their cards and characters. You can trash talk them on VoIP. And certain spells even impact your ability to see the battlefield.

I played for 40 minutes, a relatively long VR session, and time flew by. Perhaps the only drawback of pushing collectible card games into VR is that you can’t multi-task while you wait during your opponent’s turn. I found myself trying and mostly failing to peek out of the bottom of my headset to check my phone. 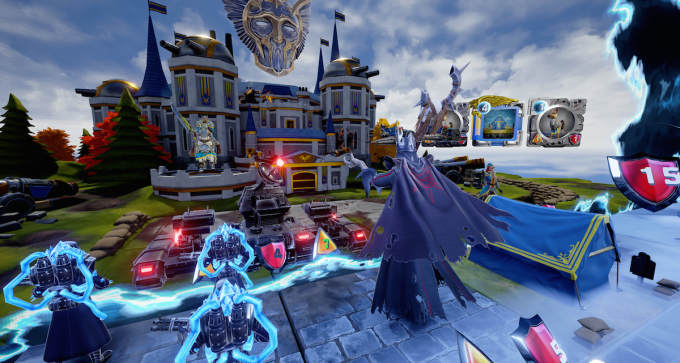 I’ll say it again, virtual reality is going to be wildly addictive. There’s always this sense of guilt when you play a physical card game, on mobile or your computer, or even a console first-person shooter, that you’re being geeky ditching the real world. You’re sitting in a darkened room staring at a table or screen.

But in VR, the game becomes the world around you. There’s nothing to remind you there’s another reality out there. Why would you want to return to the land of chores and jobs and actual responsibilities when you can be a powerful wizard fighting epic battles to control the realm?