A startup comprised of a trio of ex-Google engineers is doing something Google has roundly failed to do: make Android compelling on larger-screen devices like tablets and even PCs.

Jide Technology, which was founded in 2014 and raised $1.6 million on Kickstarter last summer with a pitch to build “the world’s first true Android PC,” has tweaked the platform to make it a little more like Windows — adding a taskbar and support for multiple windows where different chunks of app content can be positioned and peeked at on-screen, or maximized for full screen use. The idea being to improve productivity when using Android on larger-screen devices.

Jide launched its “custom engineered” Android version, Remix OS, in alpha as a free download in January this year and now has had more than one million downloads, according to co-founder David Ko, speaking in an interview with TechCrunch.

“The idea is it feels like a normal PC environment,” he says, demoing the software. “It’s like Windows. There’s a file manager, you can drag and drop — just like a normal PC.”

The first hardware product running Remix OS was a two-in-one tablet (pictured below) that comes with a keyboard, which launched about a year ago — more as a concept device to show off the platform. A crowdfunded $70 mini laptop ($40 to Kickstarter backers) followed, now selling via Amazon. Then at CES this year, Jide released the OS as a free download.

“The idea is very simple. Look at the history of Android. It started off roughly nine years ago, started with a cell phone, evolved into tablets, TV and then you get wearables as well as last year they came up with Android auto. All of them has one thing in common — they’re all for consuming content. I think it’s a natural progression that Android will move into the productivity space,” says Ko, discussing Jide’s thesis on productivity and mobile devices.

“Look at it in the next five, ten years. What about the next billion people coming online — the next five billion people coming online. Most likely they’re going to be using a Android smartphone. So the Android ecosystem will get stronger and stronger and people, particularly in the emerging market when they first come online they will say ‘Android is the computing platform.'”

“So we believe that the future of the computing platform is going to be Android,” he adds. 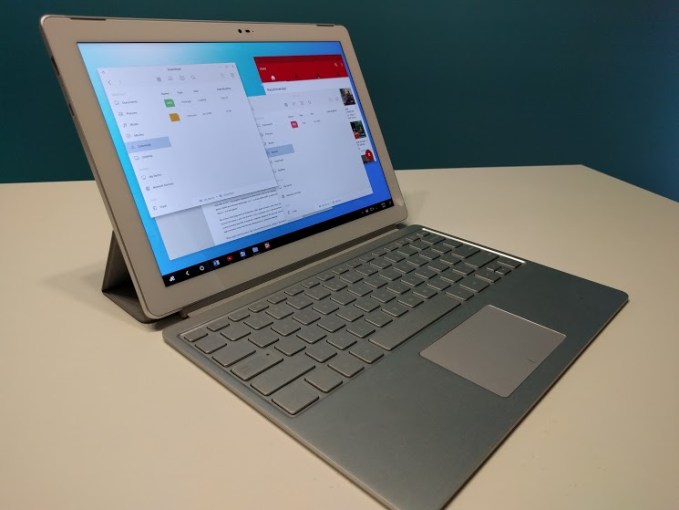 While, in recent years, PC sales have declined and lagged far behind the growth in smartphones (albeit mobile’s growth engine is also slowing as mature markets are now saturated with smartphones), Ko says Jide isn’t banking on a renaissance in PC sales, per se. Rather, they are counting on the broader concept of a mobile “productivity space” — so people making use of different types of mobile devices (e.g. laptops, mini laptops, two-in-one tablet-plus-keyboard combinations) — which can offer the promise of greater efficiency, so long as there’s a larger screen in the mix.

“We have seen last year tablet sales have been dropping but the fastest growing segment is actually two-in-one form factor [devices],” notes Ko. “It grew 200 per cent last year in 2015 and this year the projection is going to be another strong growth in this segment. So we believe that the large screen form factor people can just bring one device — instead of bringing multiple device.”

“A lot of people use tablets for consuming content… Why can’t your tablet be your primary device as well?” he adds.

“Last year it was a very clear signal; iPad Pro came out saying tablets can be a productivity device. We also had Google’s Pixel C… also coming out with a keyboard.”

In TechCrunch’s review of the latter device, we noted that “what’s missing is a split-screen view in Android and that’s a shame, given that the screen would be perfect for that.” So Jide is stepping into that productivity gap to provide the multi-screen windows that allow for an improved multitasking experience on Android.

“The way that I looked at it is Google is sending a very clear signal that Android can be a productivity space,” adds Ko, again referencing the Pixel C. “It’s telling developers, telling the world that the next version of Android most likely will have all the features that a PC would have.”

But why isn’t Google doing what Jide has done with Android? Ko argues this is because the company is now simply too large to develop features fast enough versus a small fleet-of-foot startup — noting, for instance, that Android now only gets one major version update per year versus the half-year upgrade cycle it had in earlier years. “A startup can just move faster,” he adds.

A startup can also put monetization on ice while it focuses on growing usage — which is exactly what Jide is doing. Remix OS is free to download, and Jide is not pushing a licensing model on OEMs — they get it free, too — so it’s not taking any revenue at this point. Although it does have investors to pay back at some point, having raised a $16 million Series A from TrustBridge, jd.com and Foxconn in mid 2015.

So how, then, will it make money off of a productivity-tweaked version of Android? (Assuming, of course, it’s not simply hoping to innovate its way back to the Mountain View mothership via the acquisition route…)

On this, Ko says he thinks advertising is a bad fit for a productivity-focused experience — for obvious (distraction-based) reasons. Likewise, he does not see mileage in creating an additional app store to try to compete with the breadth and depth of Google Play.

Rather, he says the monetization strategy will likely be tied to partner priorities. And another “P” word: pre-installs. “There are talks with some of our partners. 2016 is going to be a big year for us partnering with a lot of OEM branding using Remix OS for PC. They have given us a lot of feedback on potential monetization. First of all additional services. A lot of those additional services potentially pre-installing some of the productivity apps, and doing rev sharing,” he says.

“I’ll give you an example. For example Microsoft Office 365. One of the key things for Microsoft is they are losing out in this battle. Because GMS [Google Mobile Services] is preinstalled on all Android devices. So Google Docs, Google Spreadsheet, Google Slides, it’s all already preinstalled. So the next billion people when they look at productivity they will think that Google Docs and Google Apps would be their productivity. So Microsoft Office potentially will be losing out in the emerging markets.”

And from that logic it’s but a short hop to the thought that Microsoft might like to — or need to — pay an Android productivity platform to pre-install its own productivity cash cow.

How the tech wheel of fortune turns…

Unsurprisingly, given its own piqued interest in Android’s potential as a productivity platform (with the Pixel C) — and the fact all three Jide co-founders are ex-Googlers — Google has also been taking an active interest in what Jide has been doing with its Remix OS, according to Ko.

“Google is interested in how we did it. And obviously we’ve validated that space as well. We’ve raised $1.6 million on Kickstarter. And they’re like ‘wait, hold on — actually people do want Android as a PC…'” he says. “They’ve asked us the technical side as well… They did ask us how did you do this. Because Android never opened up all its APIs in multitasking and multi windows.” 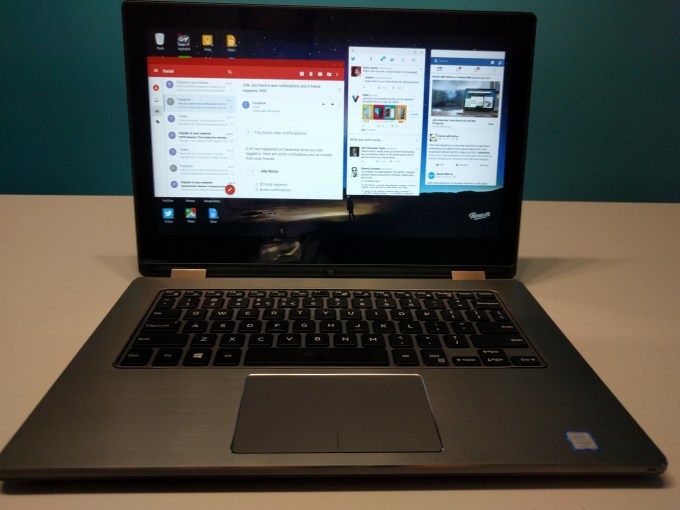 Ko reckons Google will certainly be stepping up its own productivity-focused game on Android this year — with an eye on raining on Microsoft’s Surface tablet productivity party.

“If you ask me I think Google is actually doing something similar to this. If I have to bet I would bet 2016 they will be launching something similar to this… Clearly Pixel C was a step towards that direction,” he says. “And obviously the two-in-one form factors are predominantly in the Wintel solutions. We’re seeing a strong growth in Wintel. And… Android would like to get into that space as well.

Mountain View does, of course, also have another PC effort in the form of Chrome OS. But the always-on connectivity aspect of Chrome’s cloud books makes for a very different proposition versus Android apps, which allow for offline utility, argues Ko.

He adds that Google has also been predominantly pushing Chrome OS for the education market rather than for a general productivity/enterprise use case. And given that Remix OS is not tethered to the cloud, he sees lots of potential to grow usage in emerging markets — especially where a requirement that a PC be cloud-connected may well be seen as a disadvantage.

So what are Jide’s users using their productivity-tweaked Android PCs for? Turns out, ironically enough, that gaming is a pretty popular use case — despite Jide’s core pitch being productivity.

“Flappy Birds, Clash of Clans… Roughly 35 per cent of people were actually using it for gaming as well [as productivity use cases],” says Ko. “I can imagine why because Android is very dominant in gaming. There’s a lot of free games, freemium games in Android.”

Bottom line: An Android tablet interface that doesn’t suck makes the whole platform more appealing. So it’s little wonder Google is looking with interest at what the Jide guys are up to. If they’ve cracked the Android experience for bigger screens, why, there’s a whole new mass market for Google to expand into.