Astro Digital, a satellite imaging and imagery analysis company, released the newest version of their image processing software today. Anyone can access their software, for free, and retrieve satellite imagery of any area on Earth. The company also offers an API that developers can use to incorporate satellite data into their products.

The software itself compiles global satellite imagery and allows users to select specific areas of the Earth to monitor over time. Users are notified each time a new satellite image comes in for their specified area.

With this tool, Astro Digital hopes to create a user-friendly platform that enables customers to easily understand and make use of terabytes worth of satellite data.

Currently, Astro Digital has leveraged open data initiatives like LandSat to fill their database. Eventually, however, the company plans to use imagery from their own satellites. To date, they’ve tested 2 satellites in space and are scheduled to launch 4 new satellites later this year.

“By the end of this year, we will have the ability to monitor all agricultural land in the U.S. every day.”- Bronwyn Agrios, Head of Product at Astro Digital 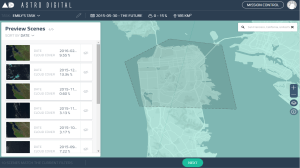 The commercial Earth-observation space is certainly getting crowded. With companies like Planet Labs and Alphabet’s Skybox Imaging leading the way, there are more private satellites imaging the Earth than ever before. In 2016, 92 commercial Earth-observation satellites are scheduled to be placed in orbit, which is 10 times more than the number in 2013.

Satellite imagery contributes to weather forecasts, disaster relief, climate modeling, population analysis, and crop monitoring. The images are especially useful when you can watch how specific areas on the globe change over time. 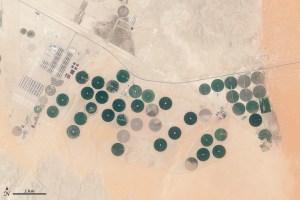 For example, with new images of the Earth provided daily or even weekly, the effects of a drought could be kept in check, we could track the spread of wildfires, or farmers could analyze how different agriculture strategies affect their crop yield.

This real time picture of the Earth is nearly a reality. As more private satellites come online, the commercial Earth-observation industry starts to encounter a new challenge: How do you package terabytes of Earth imagery in a way that works for paying customers?

This is where Astro Digital comes in. The company plans to set itself apart from other satellite imaging companies by offering the best platform for image processing, storage, distribution and access. Essentially, they want to make incorporating space into any business quick and easy.

Bronwyn Agrios, the Head of Product at Astro Digital, told TechCrunch that they’ve established themselves in this industry by focusing on the software just as much, if not more, than the hardware.

“The pixels are going to be commodified, so we’re going beyond just pretty pictures.” – Bronwyn Agrios, Head of Product at Astro Digital

However, Astro Digital isn’t the only imagery analysis player in this space. The company Descartes Labs conducts historical analysis of imagery to predict crop yields, Orbital Insight has developed machine learning algorithms that are used to track and predict the capacity of parking lots and even construction in China, and satellite operators like Planet Labs offer their own software products for their customers.

Agrios, who previously worked at Planet Labs and ESRI, said that Astro Digital is unique in that they will provide live monitoring to customers. They’re set up in such a way that allows them to process and deliver imagery to their customers in real time as soon as one of their satellites downlinks new data.

They’re also unique in that their software platform is easily accessible right from their main website and free to anyone. Other companies also offer APIs, but they’re not readily available on their websites without a paid subscription or submitting a request for access.

However, the free version only allows users to access a limited volume of content. To monitor larger areas of land over longer periods of time, a paid subscription is required.

By using their software, people can select an area of the Earth and retrieve satellite images processed to show any of 4 attributes: true color, vegetation density, urban growth, and land/water borders. When satellites downlink new data for your selected area, you are notified automatically. 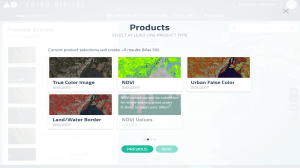 Astro Digital was co-founded by Agrios in January of 2015. She said the company is working to ensure that as soon as their satellites are launched and commissioned, they’ll already have a fully functioning processing pipeline and customer facing platform.

In just over a year, the company has employed 21 engineers and received 6 million in seed funding. They will seek out Series A funding once construction of their first satellites is complete.

Astro Digital plans to improve and iterate their software as they get feedback from users. New versions of their software will be released every 2 weeks with major releases every 3 months.

As more companies begin to incorporate satellite imagery into their business, the way that data is packaged and delivered will become increasingly important. One can only image the globe in so many different ways. Providing useful analysis on top of that data and creating slick, user-friendly platforms to present that analysis is sure to generate an entirely new wave of competition in the space industry.