Apperian, the Boston-based company that offers mobile app management (MAM) as a service, announced today that it was exposing the different pieces of its platform as a set of open APIs.

This will allow developers to tap into the various parts of the Apperian solution and take advantage of the security, lifecycle management or distribution components Apperian has developed without buying the full-blown platform.

Up until now, if companies wanted any piece of the stack, they had to buy access to the entire platform. By exposing the individual features via APIs the company is offering customers the ability to use any part of the product stack in their enterprise mobile apps without purchasing the entire package.

As an example, if a company wants to apply those security bits without using the lifecycle management or catalog features, the new API access allows them to do that. 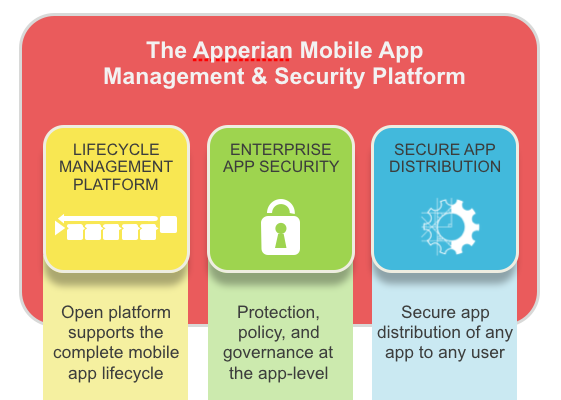 By separating the business logic from the various elements that make up the Apperian platform, it lets IT and developers concentrate on the parts of the app they know best, and leave the security and management to Apperian.

“As for IT, they have applications they may not want to change, but they can use our technology to constantly update and upgrade security and management. Security and management can evolve separately [from the rest of the app],” Chris Hazelton, director of product marketing and strategy at Apperian told TechCrunch.

One of the key differentiators of Apperian’s approach in the broader enterprise mobility management (EMM) space is that it does not secure the device as with mobile device management (MDM) vendors such as VMware AirWatch or MobileIron. Instead it enables customers to secure the app separately from the device. This lets customers share apps, not only with employees, but outside interested parties like contractors or partners without having to worry about device security.

This is particularly important when sharing apps outside the organization because those individuals are unlikely to give IT access to their devices as MDM approaches typically require.

“One of the hallmarks of our approach is that we can put security around individual apps and
can distribute apps securely to unmanaged devices,” Mark Lorion, chief marketing and product officer at Apperian told TechCrunch.

It’s worth noting that the APIs are only open to Apperian customers and partners.

The company was founded in 2009. It has raised almost $40 million with the most recent round being a $12 million Series C investment in September, 2015. Apperian boasts 16 patents, has 66 employees and 125 customers including Cisco, Toyota, Walgreens, AT&T and the Transportation Safety Administration.