A small 3D printing company called Just3DPrint has scraped a large portion of Thingiverse, Makerbot’s Creative Commons-based database of 3D models. The company then posted these models for sale on eBay in direct violation of many of the terms the creators offered online.

The resulting brouhaha has shaken the 3D maker community and made many rethink the definition of Creative Commons.

Printing “free” models is not new. Many users have downloaded items from Thingiverse and either printed them at home or sent them to a service for printing. Making money on these items, however, is frowned upon without prior licensing and permission. Just3DPrint has created an eBay store featuring hundreds of items from Thingiverse complete with images of user renders and odd price combinations. Take this little bear for example: 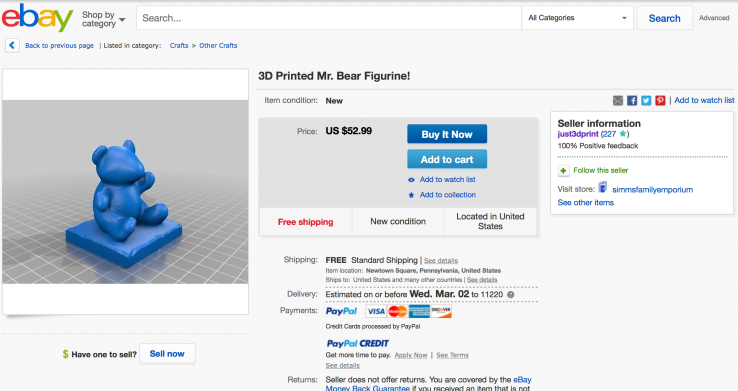 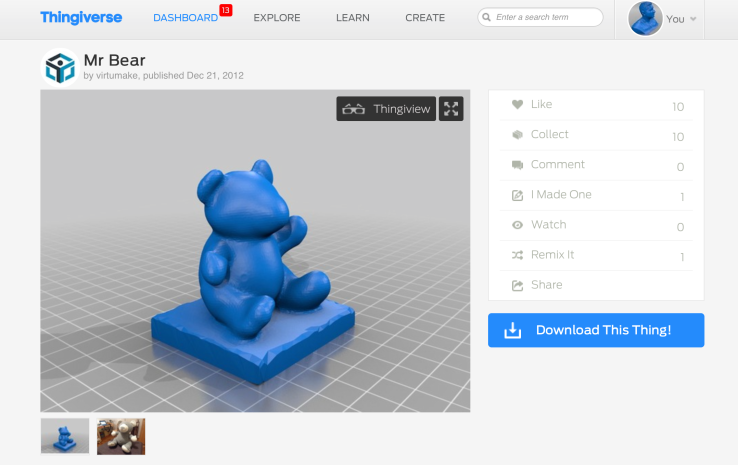 One particularly peeved maker, Louise Driggers found many of her designs on eBay even after posting them under a Creative Commons non-commercial license, which allows for downloading and printing but not commercial gain. Driggers posted a Sad Face in reaction to the eBay sales which drew Just3DPrint into the conversation.

“Since we, Just 3D Print, and other companies/individuals are being maligned and spammed by people this week for commercializing public domain CAD designs, we will post a long and thorough response on this page, and other similar pages, so that all creators can better understand all of the potential issues surrounding such commercialization, and know what they can or should do with their designs depending on if they want them commercialized by others,” the company wrote in a deluge of copypasta. “Stratasys/Thingiverse is DIRECTLY enabling commercialization of the “non-commercial thing” in exchange for $ from 3D Hubs. While at the moment the program is an opt-in, don’t be surprised if very soon Thingiverse makes the 3D Hubs icon either opt-out or non-removable entirely. While we could list several other ways Thingiverse makes $, any creator should get the picture by now-Thingiverse exists to make Stratasys $ off of creators’ designs in direct violation of its very own “non-commercial” license. If a creator is OK with a billion-dollar Israeli company monetizing his/her designs, but hates on a Philly startup trying to make ends-meat, then they have a very strange position indeed.”

The company did not reply when I asked for comment although one commenter claims that “I do recall I sent you a message on eBay about this once already, and you replied quite boldly ‘Fuck off, its open source, I can print what I want and sell it.'”

The position most makers take regarding their models is that it’s fine for users to download, remix, and print their designs for free. Makers who want to make money can license their products commercially or upload them to services like Shapeways where can be quickly printed in multiple materials. This does not stop the average person from downloading a free model and paying someone to print it – popular services like MakeXYZ make it easy for users to do that – but many users are upset that Just3DPrint stole designs and images in a wholesale effort to commercialize non-commercial property.

“I’ve had to ask people to quit using my models in a commercial context before, and have – obviously I guess – never had this sort of response,” said Driggers. “I know there’s a lot of debate over where and how copyright and licensing apply in the 3D printing world, but my work is mainly art. I expected to have to defend it, but to having the validity of both the copyright and CC licensing called into question surprised me.”

“Sharing work is one of the most exciting aspects of the 3D printing world and contributes hugely to further development and innovation in the community, and I have to admit to still being excited when someone prints one of my models and publishes a ‘make.’ I don’t want people selling my art in their store without my express permission, and I don’t want them using it as advertising for their products without my permission.”

Driggers is an artist but worked originally as a systems engineer. She things Creative Commons is a means to an end and she sees this as a rallying opportunity for the 3D making community.

“The models these guys are selling were CC-noncommercial. That’s as open and free as you could possibly ask for. Everyone can use them, for anything, except to sell. That’s a very generous offer. The designer spent his time and equipment making them and gets nothing for it, you can have it, so long as you don’t make money off it either,” wrote one Reddit commenter. “If people can just step in and start selling them, that’s what’s damaging. Why would the designers put them up for free anymore, if someone is going to sell them anyway, why not lock them down and sell them themselves? Or just never put them up in the first place, so you don’t have to be bitter that someone else is getting paid for your work?”

The problem has led to a rethinking of many of the rules around CC and 3D printing. While Thingiverse is run by a private company, many of the users assumed they were working with like-minded creators who understood the limitations – and power – of CC.

“We’ve been making assumptions about the protections that CC and Copyright afford, and on what they apply to – this particular situation is maybe the rallying point we as a community can use to bring more clarity to what is a bit of a muddy situation!” said Driggers.

Driggers doesn’t want to pull her models because of one bad actor.

“When I was a child I would often want toys and objects that didn’t exist. Now I can make them for myself and share them with other people. Some people think they are silly but many people love them. Creating things makes me very happy – honestly, I don’t think I could stop,” she said.