Developers in the West may not know it, but there’s almost certainly a major flaw in your app that is preventing potential users in emerging markets from signing up.

Beyond unreliable Internet connections and slow speeds, the conventional onboarding method for opening new accounts is often broken because it requires an email address. Yes, email is common in the West, but that’s not necessarily so in parts of Asia or Africa where mobile is the primary Internet access channel. For example: if you only go online through your phone, and messaging apps are your means of communication, why would you need email?

Facebook and Twitter-based sign-up does exist, but Truecaller — the smart calling app and directory — thinks it can do a better job by using its platform as an onboarding system. With that in mind, the company today announced an SDK that enables app publishers to let users sign up using their phone number as their ID, if they are already a registered Truecaller user. The idea is to remove friction and make the sign-up process as simple as possible.

The issue is very real. This is something I’ve personally seen in Southeast Asia, where first-time Internet users are very different to audiences in North America or Europe.

The registration process for almost every mobile app sucks for people in emerging markets, not everyone has email or even Facebook

‘TrueSDK’ has initially launched in India, Truecaller’s biggest market which accounts for half of its 200 million global userbase, and only for Android right now. Truecaller said it plans to open it up in the future.

The company has announced an initial 12 partners for the SDK, including SoftBank-backed OYO Rooms, classifieds site Quikr and ticketing service Redbus. A Truecaller spokesperson confirmed to TechCrunch that the service is free for app publishers, and, further, there is no plan to monetize it in the future. 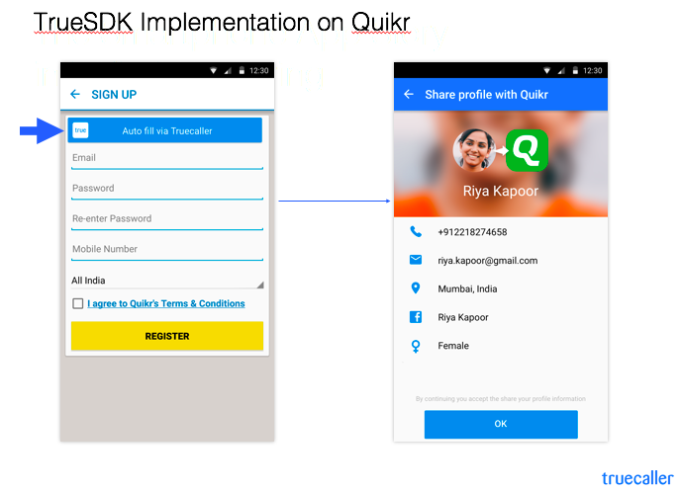 “We realized the power and importance of a mobile number, especially when it comes to personal identification. Our aim is to empower third party apps with a credible verification option and enable users to use the app of their choice by making their phone numbers their identity,” Nami Zarringhalam, chief strategy officer and cofounder at Truecaller, said in a statement.

Truecaller, which is based in Stockholm, Sweden, has raised $80 million to date, including a $60 million Series C round in 2014. Last summer, we reported that the company was looking to raise $100 million, at a valuation of over $1 billion, but that deal is still to close.