Microsoft announced today it’s beginning to roll out its new Office 365-powered version of Outlook.com to all users, following its launch into preview mode last year. Thanks to its deep integration with Microsoft’s Office 365 platform, Outlook users will be able to do things like collaborate on documents sent as email attachments while they reply to messages, share files from OneDrive and other online services, move between Skype and email from the inbox, and more.

The launch also sees Outlook.com adding a number of partners add-ins to the inbox experience, including a newly launched Giphy integration, which complements the Yelp, Wunderlist, Uber, PayPal, Evernote and Boomerang add-ins which were previously announced.

Giphy (which notably launched an integration on Twitter today as well), is quickly becoming the leader in GIF search on the web and mobile.

In Outlook, the Giphy add-in will allow users to have more fun with emails by searching across its library for animations that can be pasted into your messages.

Meanwhile, Uber is also running a promotion to celebrate the revamped Outlook.com’s public debut and is offering $20 off your first ride when using the Uber Outlook add-in. Boomerang, too, is getting in on the action by offering six months of its scheduling and email tracking service for free.

Many of Outlook.com’s new features were introduced last May when Microsoft launched the email service into Preview mode with a smaller group of customers. These features include tools for managing inbox clutter, smart search suggestions and ways to refine searches, as well as support for link previews, inline images, added themes, pop-up “read” and “compose” windows, pins and follow-up flags, and the above-mentioned third-party add-ins.

With the exit from Preview, Microsoft says it’s made its add-ins easier to find by placing “add-in commands” on the top of the screen. That means you can click a button with the add-in’s logo to use that feature.

These commands are rolling out now in North America over the next few weeks before expanding to the rest of the world.

In addition, Outlook and Skype have become better integrated in the new version of Outlook.com, allowing you to start voice calls, video calls, or chat sessions on Skype from your inbox. You’ll be able to schedule Skype calls from Outlook soon, Microsoft says. 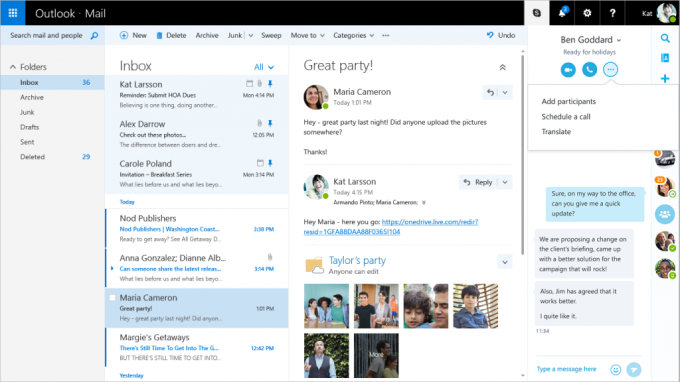 The document collaboration features are also extremely useful for business users, as it reduces the number of steps between working with files and sharing them.

Instead of having to exit your inbox to make changes or notes on a file, Outlook.com users can open an email attachment and see it side-by-side with their email. This works with Office documents like Word, PowerPoint and Excel, and your changes are instantly saved when you hit “Send” – again, saving you from having to download, then re-upload files. 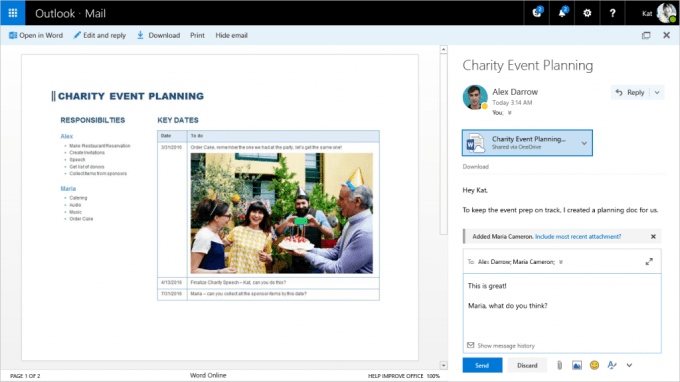 You can view photos side-by-side with emails, too, Microsoft says.

With the latter, you can add someone’s name in the body of an email conversation to indicate they need to respond to a particular item in the message. This works in both email and calendar invites. (See below).

Microsoft says it’s rolling out these upgrades to Outlook.com users as quickly as possible, with millions of accounts being upgraded each week.