Yesterday at 12:57 pm EST, the European Space Agency (ESA) successfully launched the Sentinel-3A satellite into orbit. The Earth-observing satellite was launched by the Russian-made Rockot launcher from Plesetsk, Russia and is the latest satellite to join Europe’s environmental monitoring program known as Copernicus.

The Copernicus program consists of around 30 Earth-observing satellites and, according to ESA, is “the most ambitious Earth observation program to date.” Essentially it is Europe’s version of U.S. Earth Observing System which consists of about 2 dozen NASA and NOAA satellites.

Copernicus satellites are used for environmental purposes by monitoring changes across both land and sea. Some are also equipped with high-resolution optical cameras and can be used for border and maritime surveillance.

Replacing older Earth-observing satellites that have reached retirement, the Sentinel series will ensure that there are no data gaps in ongoing planetary studies.

Earlier satellites in the series, Sentinel-1 and Sentinel-2, were launched in April, 2014 and June, 2015 respectively. Sentinel-1 used radar imaging for land and ocean monitoring, while Sentinel-2 provided high-resolution optical imagery for land monitoring.

Another interesting aspect of the Sentinel series is that the United States signed a cooperative arrangement with the European Union which allows NOAA to have near real-time access to the satellites’ data. This agreement allows NOAA to leverage ESA’s assets without having to launch additional satellites of their own.

When it comes to observing the planet, international partnerships are not all that uncommon. Much of the data collected from these types of satellites isn’t sensitive in nature and could help nations better predict weather and global effects of climate change. Because many of the satellites required for long-term Earth observation can be expensive, strategic partnerships often make financial sense. 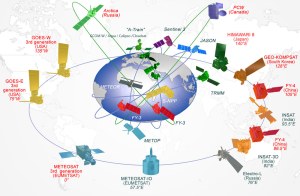 For example, NASA and NOAA’s recent Jason-3 Earth-observing satellite cost over $360 million. However, that cost was shared between the US ($177 million), Europe ($119 million), and France ($68 million). All three of these countries will have access to the Jason-3 satellite data which provides sea surface heights around the globe.

On their website, NOAA states “no one country alone can afford to effectively monitor the entire Earth.” NOAA itself actively shares data required for weather and environmental prediction on a full, free, and open basis. But they receive more data from international partners than they provide.

“NOAA is one of the world’s leading providers of Earth observation data, yet we receive three times more meteorological data from our international partners than we provide the international community.” – National Oceanic and Atmospheric Administration

The Sentinel-3a satellite is expected to provide Earth-observation data 24 hours a day, 365 days a year to its international partners for the next 7 years.