Yello Mobile — the Seoul, Korea-based mobile apps business that has grown by raising nearly $150 million and acquiring over 80 other app startups — has picked another $30 million in funding. This latest cash injection comes from SBI Holdings, a digital financial services group based out of Japan that announced a strategic partnership with Yello at the end of last year.

When we covered Yello’s recent round in December, we noted this was a first tranche of funding and that there likely would be more coming into the same round. Sure enough, this is what is being announced today: this $30 million is at the same $4 billion valuation we reported last year

This makes it a $73 million round so far: Yello says there is likely to be another, final tranche announced before this round is closed off, coming from SBI as well as other prior investors, which include Formation 8.

“We are pleased to add a strategic investor of SBI Holdings’ caliber to our roster of high quality investors and simultaneously strengthen our partnership with Japan’s leading online brokerage,” said Lee Sang Hyuk, founder and CEO of Yello Mobile, in a statement. “SBIH’s financial support and global business network will be valuable assets to Yello Mobile as we continue to expand our geographic reach. We are intensely focused on driving sustainable growth and profitability and appreciate the vote of confidence that this investment represents. We look forward to continuing to work with SBIH to drive each of our businesses forward.”

Founded in 2012, Yello Mobile has built its business around five categories of apps: Shopping, Media, AdTech, Travel, and Offline-to-online. Is also has a separate business called the Yello Financial Group, which Yello describes as “Korea’s leading accelerator for financial technology companies.”

Citing quarterly financials at the end of February and a subsequent quiet period, the company declined to answer questions about how each of these individual segments is faring, or what apps are most popular at the moment.

But it did provide some more general stats: revenues at Yello in the first three quarters of 2015 were up 338% compared to the year before, and Yello “has already achieved profitability in key segments.”

Again, Yello did not specify which segments are profitable, but as a point of reference, in December, the company posted operating profits in AdTech, Travel and Offline-to-online, with negative EBITDA in Shopping and Media — areas that the company told me at the time were intentionally being run this way to help them scale faster. 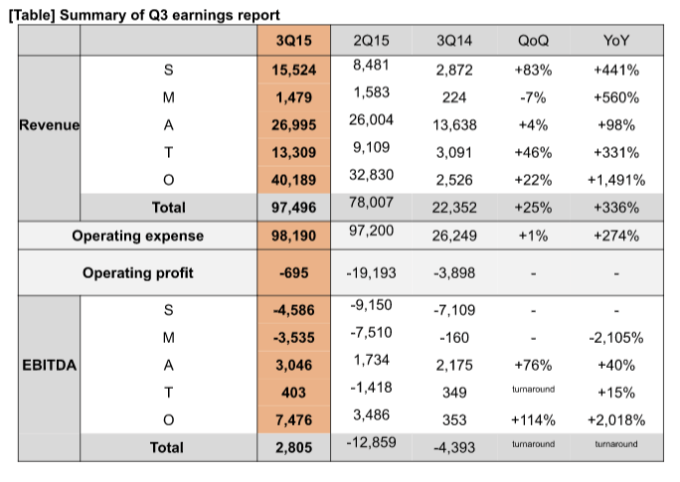 Indeed, Yello notes that its two most popular apps at the moment are Coocha and Pikicast — respectively a shopping search app and “the most entertaining app of the universe.”

While Yello has been focused on getting its wider business into the black, the SBI strategic partnership is an interesting development.

SBI Group — itself a profitable company — has more than a dozen products under its control, with the primary focus being on financial and other business services. In addition to a brokerage, these include a pure-play Internet bank, online insurance, financial media and content plays such as Morningstar Japan, and more.

SBI has also invested in a number of startups that are working on the more cutting edge of financial services. These include stakes and strategic deals in four different alternative currency startups: bitcoin and blockchain startup Ripple; Japanese bitcoin trading platform bitFlyer; Kraken exchange developer Payward; and SMB cash advance startup Fundbox. All of these were disclosed just at the end of last month.

Yello and SBI have been working on ways to leverage Yello’s app network and SBI’s services to build out each other’s businesses across Asia. But significantly, Yello tells me that this its work with SBI is not a signal that Yello will be doing more in financial services directly. “Yello has no intention to add more verticals for the time being,” a spokesperson said.

This seems to be how SBI likes it, too.

“By focusing on key strategic verticals, Yello Mobile has quickly become Korea’s largest mobile platform, with tremendous consumer reach. We see substantial opportunities for the company to expand both at home and abroad, and we share Yello Mobile’s vision of creating a dynamic mobile system across Asia. We are excited to support the company’s continued growth while leveraging Yello’s unmatched digital marketing expertise and loyal customer base to enhance SBIH’s own offerings,” Yoshitaka Kitao, President and CEO of SBI Holdings, said in a statement. “Starting with this investment, we will deepen our strategic business collaborations and drive sustainable growth for us and for Yello Mobile.”