“The next big thing will start out looking like a toy.” At least according to A16Z partner Chris Dixon. He used the phrase to explain why incumbents often confuse new, disruptive threats to their businesses with trivial gimmicks. But what if the next big thing doesn’t just look like a toy, but actually is one?

Last year was the first year where consumers showed sustained interest in connected toys outside of just the holiday season. We’re witnessing a sea change in demand for toy connectivity — what once was a cool novelty is now a fundamental feature of play. This development is allowing tech startups to infiltrate the $90 billion toy industry.

Over the past several months, Tandem has dived headfirst into the space, analyzing its key segments and examining where to expect the largest future opportunity for disruptive growth. Here are our learnings. 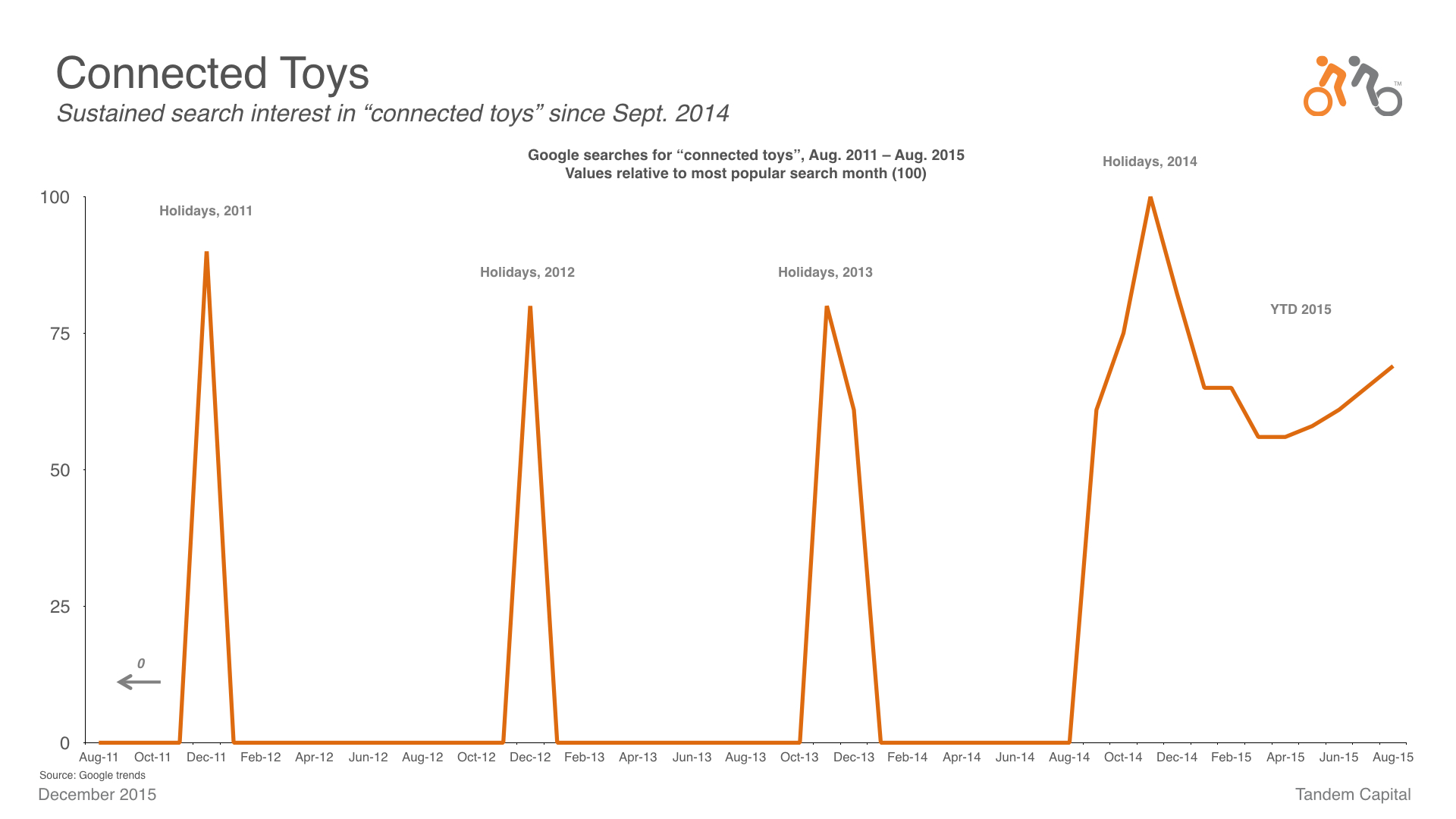 At a high level, the demand for connectivity in toys has led to an almost predictable swell of well-funded startups emerging to challenge toy incumbents. These startups see a chance to topple even the largest incumbent, using their digital prowess to create better connected-toy experiences than slower corporate giants. And VCs apparently agree.

In the past five years, investors have poured over $300 million into connected toy startups, with more than one-third of that money coming in 2015 alone. 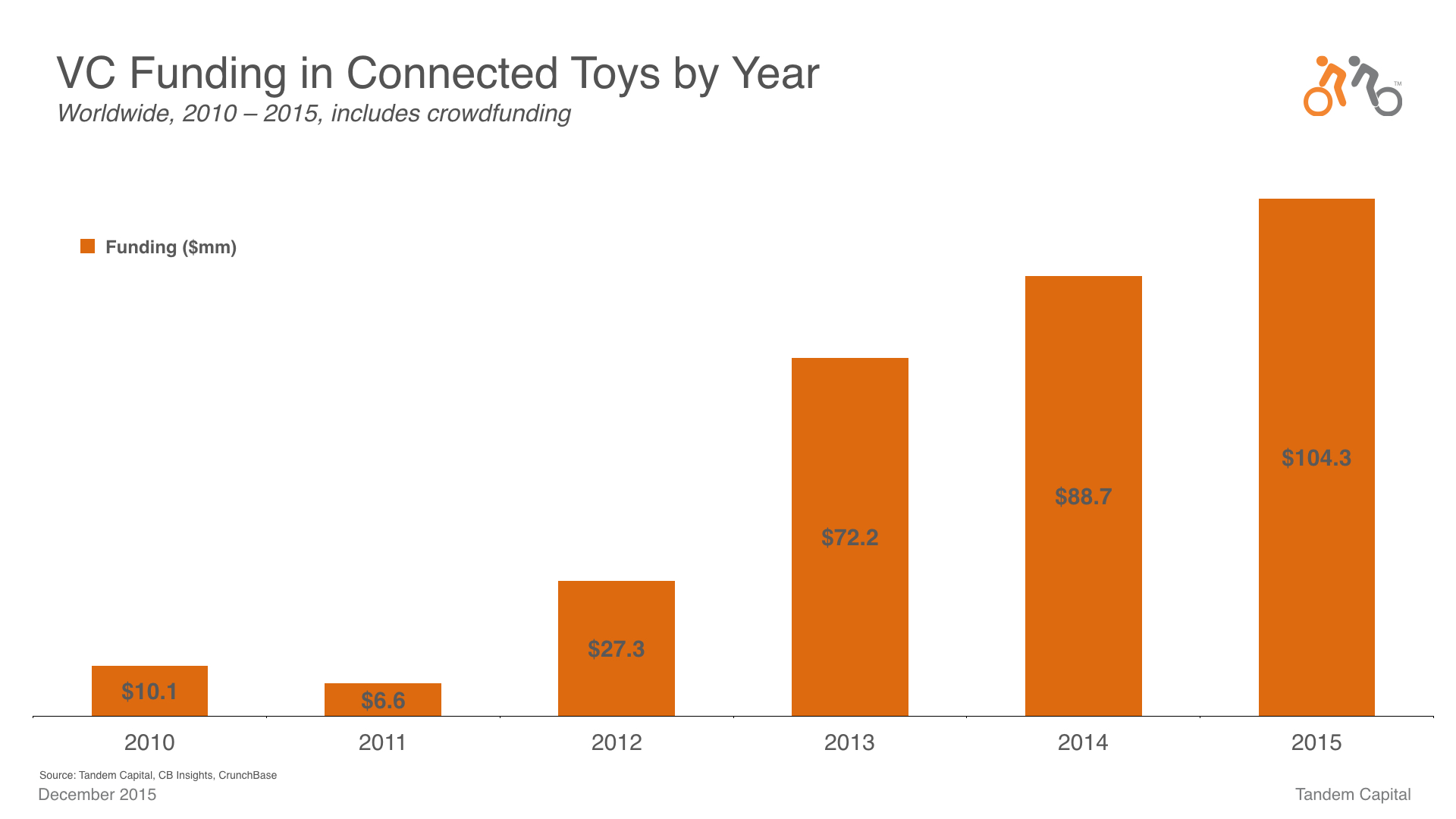 Three segments stand out, receiving the majority of startup and investor interest: 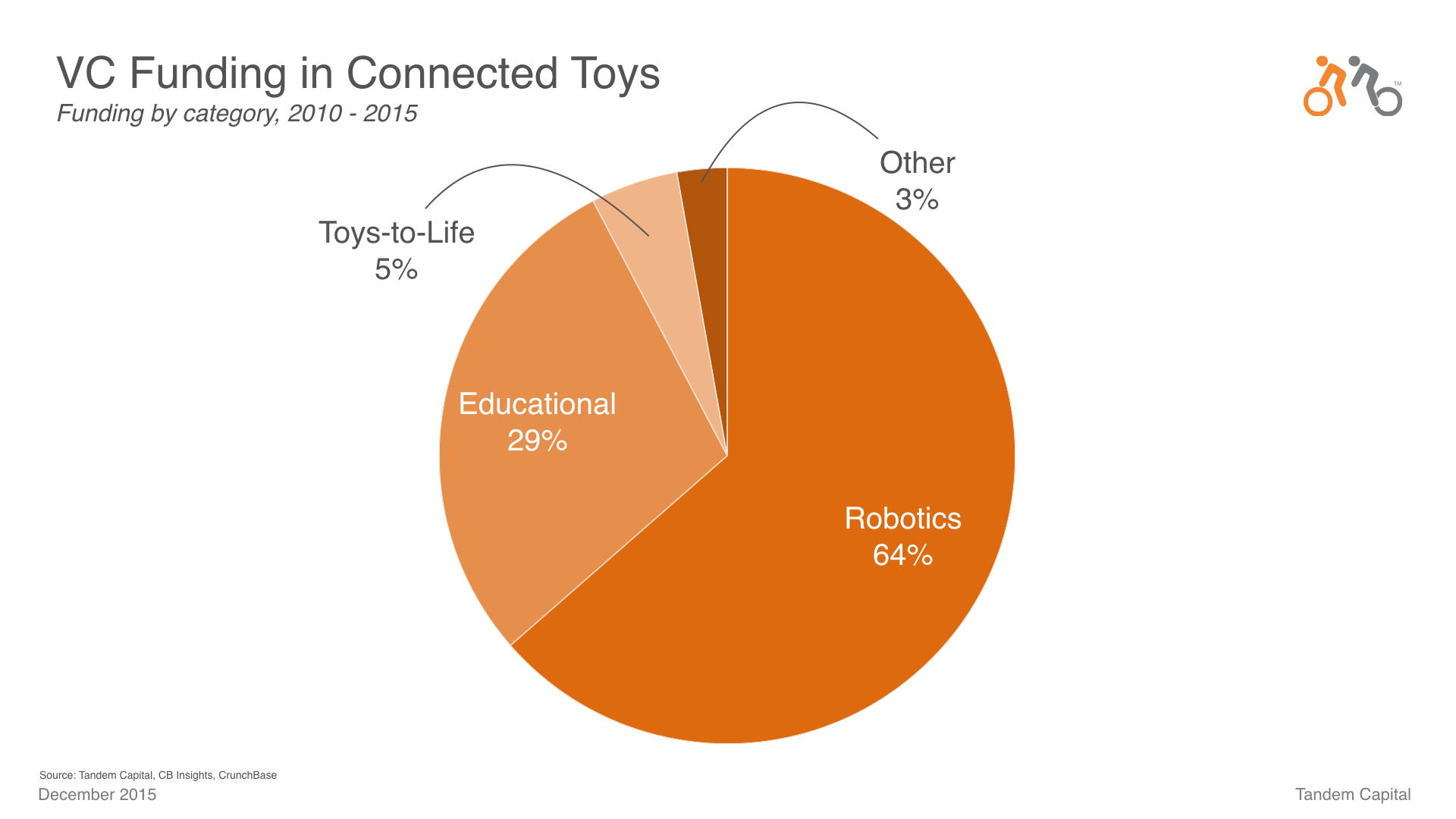 Smartphone-controlled robots have raised nearly $200 million in funding to date, by far the most of any connected toy segment. 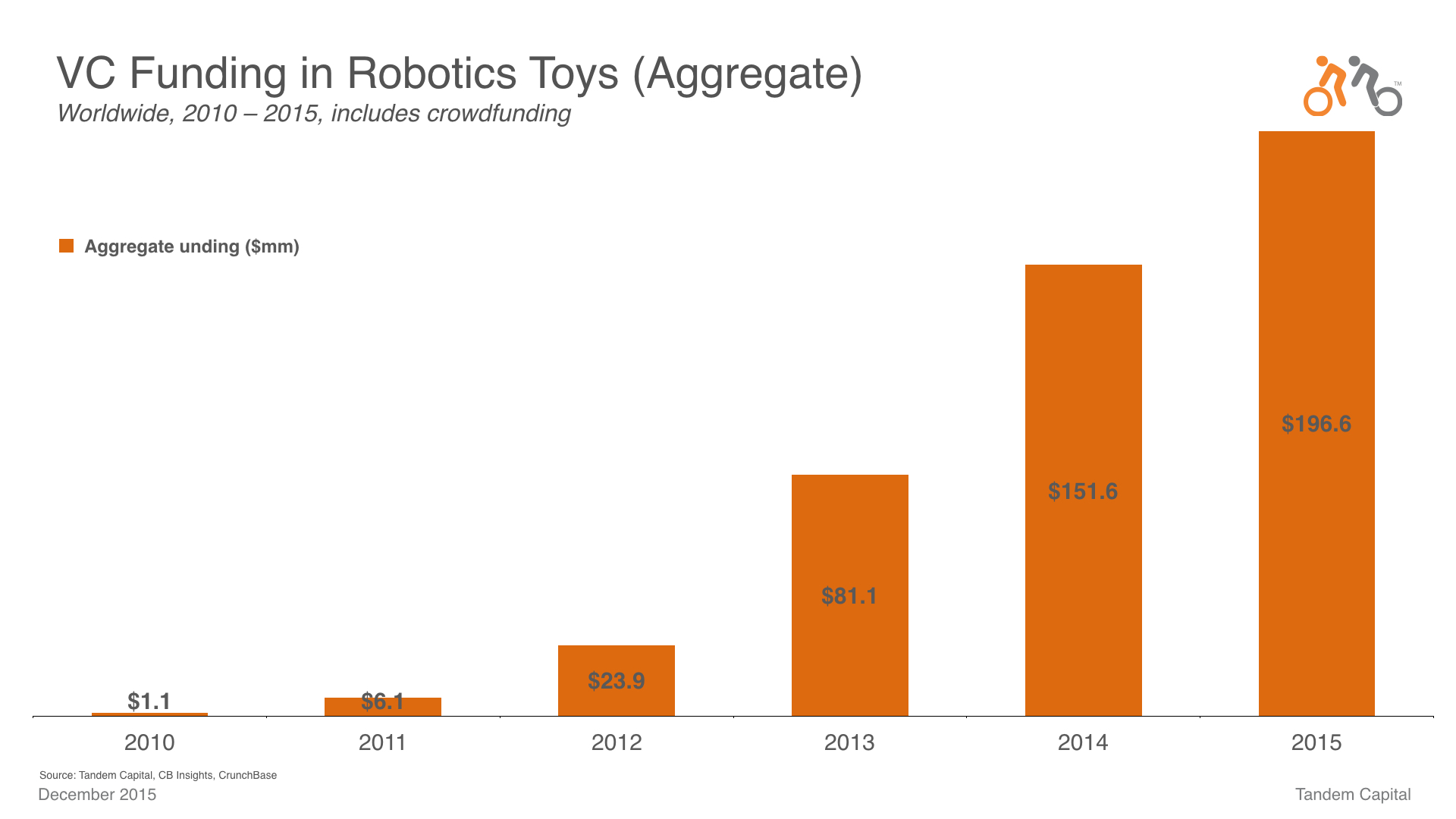 The group includes two of the best-known connected toy startups: Anki, which has raised $118 million from firms like Andreessen Horowitz, and Sphero, which recently designed the new BB-8 droid for the upcoming Star Wars: the Force Awakens film.

Sphero’s robots, on the other hand, understand their location in three-dimensional space and can react to voice commands. This impressive underlying technology could even position Anki, Sphero, and others as the next Roomba or Dyson.

But in terms of early-stage opportunities, there aren’t many left to snatch up. The two leaders already have a five-year head start, in addition to plenty of capital, highly competent executives, and enough stellar partnership deals to make lean-funded competition unlikely to be effective at this point. If you’re on the hunt for the next big seed-stage opportunity in connected toys, look elsewhere.

So far, programmable educational toys have received $89 million in funding since 2011.

However, almost all this amount went to just two companies. littleBits has raised $77 million to sell boxes full of “gizmos” and “gadgets” that inspire kids to build remote-controlled toys or connect household appliances to the Internet.

Modular Robotics has raised $7 million and develops Cubelets, interchangeable blocks that connect in various ways to build unique machines. So far however, a sustainable market for educational toy products has proven elusive.

There’s a well-known problem with edtech engagement across the board — signups and purchases are high up front, but completion rates and repeat buyer stats are more sobering. In the educational toy space specifically, the engagement conundrum manifests itself in the friction between parents that want their kids to learn and kids that just want to have fun.

On its surface, toys-to-life seems the least attractive of the three main connected toy segments. It has received much less funding than robotic toys and educational toys, while also experiencing more investment volatility. Toys-to-life has raised a total of only $17 million across 11 companies, and 53 percent of this funding came all the way back in 2010. 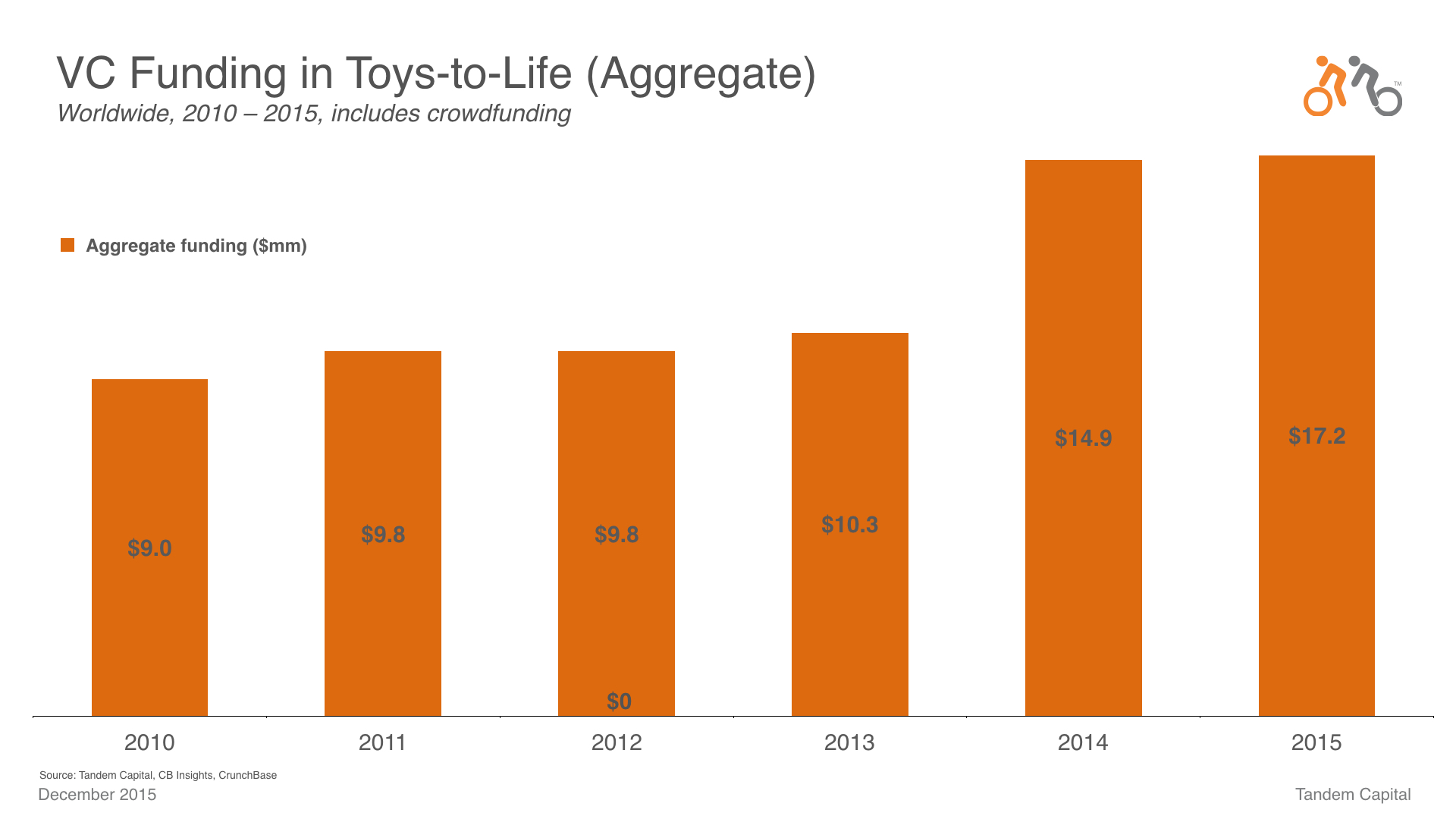 Looking at the chart above, it is clear that venture investors have been slow to back toys-to-life. Large incumbents like Activision, Disney, and Nintendo (“the big three”) all already have skin in the game, launching very successful products in 2011, 2013 and 2014, respectively, and command close to 100 percent of the market. Accordingly, there is a common belief in Silicon Valley that the toys-to-life ship has sailed, so to speak. But we take a more contrarian view.

In our view, toys-to-life will produce the first, new billion-dollar revenue company in the connected toy category. And the big three should be thanked for proving out the market. Their toys-to-life products generated nearly $3 billion in revenues in 2015, and the overall market is expected to treble to an approximate $9 billion by 2018 — or ~11% of each of the total toys and games markets. 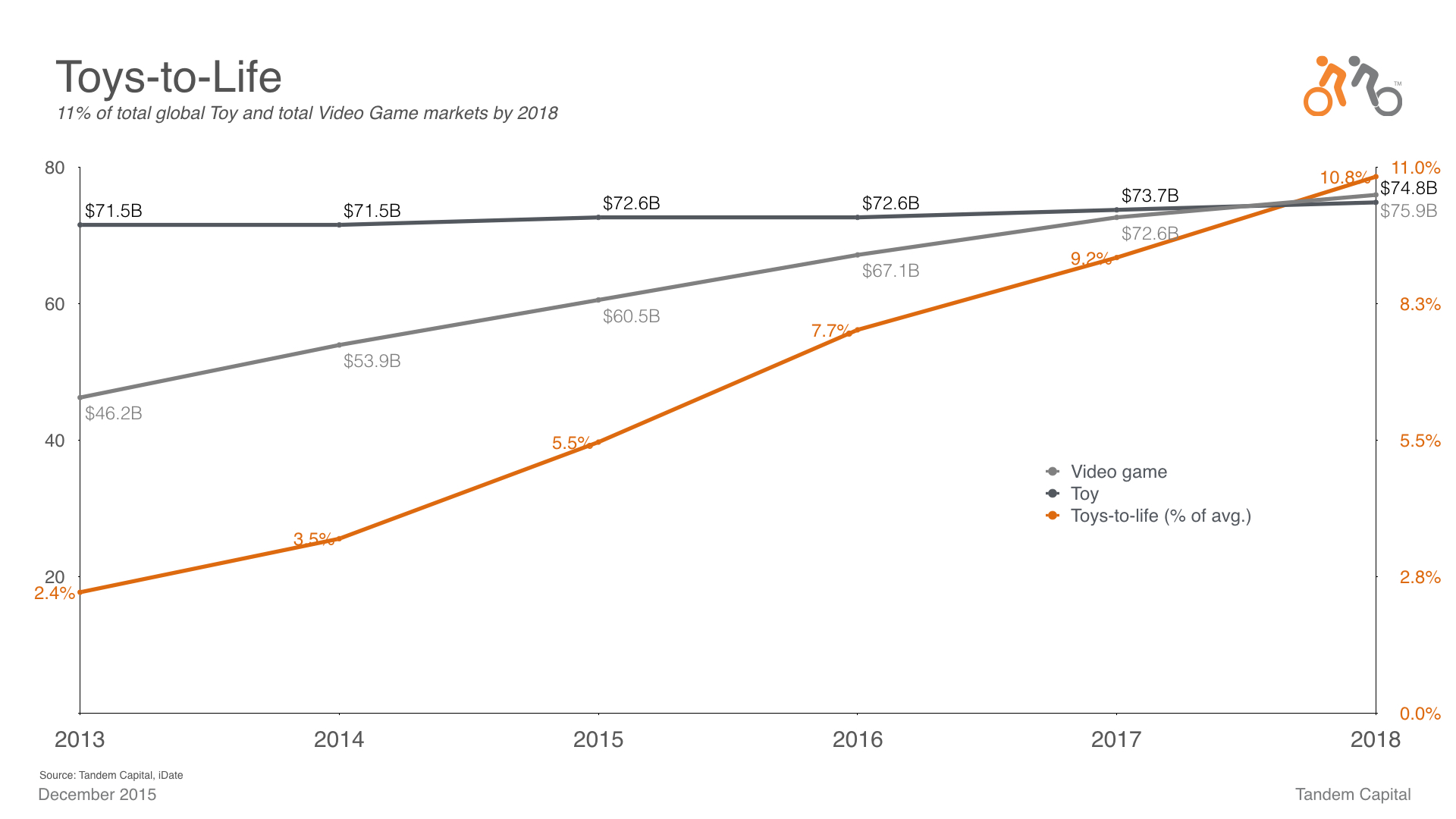 Loyalty in the space is astounding: a full two-thirds of toys-to-life customers will purchase additional games or figurines within a year. Our own data shows that a toys-to-life product sees 8x the LTV of a typical game or toy alone, an increase from $50 to a whopping $400. Add the steadily lowering costs to start hardware companies, and the huge opportunity for connected toy startups becomes even clearer.

Of course there will be challenges. Namely, how can startups effectively compete with the likes of Disney for toys-to-life market share? The most successful startups will get there by leveraging the following trends:

Mobile as the “Great Leveler.”

With over 1 billion smartphones and over 800 million tablets having been sold since 2008, mobile has outgrown traditional game consoles by nearly 4x. This incredible scale available only through mobile has even enticed the big three toys-to-life companies to design tablet versions of their games to accompany home console versions.

Unfortunately for them, mobile has proved to be the Great Leveler, so to speak. App store siloes, near frictionless distribution, and falling software and hardware costs all working in startups’ favor. As in many industries, mobile will be a key lever for startups to bite off a chunk of the growing toys-to-life pie.

The big three, especially Disney and Nintendo, are using toys-to-life to further expand their existing content franchises. This narrow focus on enhancing existing IP could lead them to ignore broader opportunities to incorporate other popular content into their offerings.

Coupled with the rise of YouTube, Netflix and Amazon as user-generated or original content producers, startups have been gifted a number of potential heavy hitting partners from which to source popular content. Counterintuitively, startups could even end up with larger content portfolios than the big three.

Videos tell stories. As such, they have become a key ingredient for startup brand building. But perhaps even more importantly here, storytelling through video invents and develops the rich worlds where toys-to-life characters live. If leveraged correctly, video can drive deeper and broader engagement with toys-to-life figurines and games, providing material for children to imagine their own storylines while extending the franchise with new content.

Thankfully, YouTube and Facebook have helped democratize video distribution and access, lowering cost barriers to creators and viewers alike. You no longer need to make a feature-length, $12-a-ticket blockbuster to drive massive adoption and lasting engagement.

This isn’t all talk, mind you. Taking full advantage of these trends, Tandem and NEA-backed Gamaya has leveraged the hugely popular Indian epic the Ramayana for its toys-to-life mobile game targeting the global Indian market. It expects to do nearly $15 million in sales in its first year. That kind of extraordinary out-of-the-gate performance quickly fortified our confidence in toys-to-life.

To be clear, we fully expect the entire connected toys category to continue to expand in coming years. But toys-to-life will be the segment to provide the kind of huge returns early-stage VCs are looking for.

In terms of competition, engagement, and longevity, it presents the most attractive opportunity and is the only segment capable of birthing full-fledged media franchises. Accordingly, when the first connected toy startup hits $1 billion in revenues, don’t be surprised to find it offers a captivating toys-to-life experience.

For the full report on Connected Toys from Tandem Capital, including lists of top-funded companies and top-funding investors, please reach out to Nick Mayberry.