As the world’s big messaging apps add more features to keep their users locked in for longer, other apps are tapping into messaging features in the hopes of creating more stickiness of their own. In the latest development, Flipagram, the app that lets you sew together pictures and video snippets with one minute of music to create packaged stories, has added a direct messaging feature.

Now you can send your Flips through to specific friends or groups of friends without leaving the app. 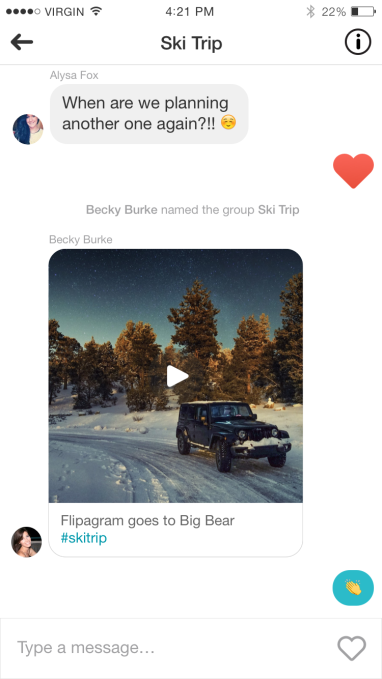 In the past, you could send Flips to people directly only by leaving the Flipagram app to do it. You can still send by email, SMS and other routes, but the functionality of the Flips will be more limited, Farhad Mohit, co-founder and CEO of Flipagram tells us.

One key feature is the pause — crucial if you want to see more than a blur of images in the space of a minute, which is how many Flips set to the bouncy beat of a hit song end up looking.

The DM feature will now get a prominent place, directly to the right of the + at the bottom of the screen that you press to create a new Flip. It will replace the music button, which will now live in the app’s “Explore” section. You find friends to message by following them and them following you back in the app.

The messaging interface, meanwhile, will appear on a different screen, where you can exchange messages as well as Flips with friends.

The move to add a messaging feature comes at an interesting time for Flipagram. The company raised $70 million (reportedly a round that was made at a $300 million valuation) in February 2014, announcing the funding in July of last year to coincide with the news that it had managed to sign licensing agreements with all the major music labels for the music on its service.

Since then, Mohit tells me the app has ballooned to over 40 million registered users (from 33 million disclosed at the time the funding was announced), while the app has added other features like video, which is now in 40 percent of all Flips.

The stats for how the app has been faring in download charts also point to sustained interest in Flipagram, with the app consistently hovering in the top 10 of photo and video apps in the key U.S. market.

That lays the groundwork for a decent amount of users of the app, so that an in-app messaging feature becomes something that might actually be useful, and used.

As an anecdotal measure of Flipagram’s growth, I’ve been noticing several of my non-tech friends creating and sharing Flips on sites like Facebook, which speaks to how the app appears to be gaining traction with people outside of the Silicon Valley bubble.

But at the same time, the company has been facing some growing pains. In October, the company let go of 20 percent of its staff with the aim of reorganizing its team more sharply around engineering, product and design (and the startup is still hiring).

It seems that the direct message feature is a result of some of that sharpened focus.

Flipagram has partly grown as a result of its multiple integrations (if you’re not a Flipagram user, chances are you’ve seen them shared on other platforms like Facebook and Twitter), so now more attention is being put on ways of getting its users to spend more time sharing and consuming on Flipagram itself. 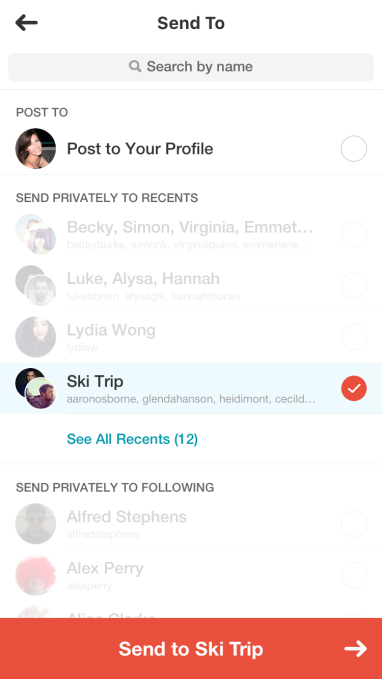 Using messaging to do that is a notable move. Messaging is in many ways the killer app on mobile at the moment, with apps like WhatsApp and Messenger (both owned by Facebook) now used by billions of consumers.

The pull of messaging apps is so strong that there are examples from entirely different businesses — news sites, for example — looking to messaging formats as a building block to build their own apps. The medium really has become the message.

More time spent on Flipagram, not just creating but consuming content, could help the company longer-term with its monetizing strategy. Up to now the company has been cozy with brands and marketeers, Mohit says, but there have been no moves to launch paid campaigns on the platform. Not yet, at least.

“We are still building the core use cases,” says Mohit — a repeat entrepreneur who knows a thing or two about monetizing, having founded and sold Shopzilla and Bizrate for over $500 million 10 years ago. “It’s too early to monetize.”

The DM feature could also potentially be used to develop products. Apropos of being launched the weekend of Valentine’s Day, I asked Mohit about whether he’d ever considered developing a dating category for Flipagram, where people browsed Flips of people looking to meet others folks, and then used the DM feature to contact each other.

“I wouldn’t say this is a dating site but it could be a way of getting to know someone better than you would in Instagram,” Mohit says.

Aside from spitballing whatever may come in the future, adding messaging is also a move being made to capitalize better on existing user behavior. Mohit notes that of the Flips that have been shared off network, over 60 percent have been to personal communication services like email and SMS.

Flipagram has been compared to Snapchat and Instagram, in part because they all target a similar demographic, but also because Snapchat Stories and Instagram offers a similar kind of very visual-first experience.

Mohit believes that Snapchat at least is a “perfect complement” to Flipagram, he says.

“The fact is that those Stories disappear every day, which sometimes makes sense, but not every day. Some of it should remain.” In Flipagram’s creation flow the app shows users a Snapchat folder, as well as one for Instagram, on a user’s phone to create Flips using Snaps and Instagram.