Marc Andreessen is having quite a contrite Wednesday. Andreessen, who currently sits on Facebook’s board, caused a stir last night with his online response to Indian Internet regulator TRAI nixing Facebook’s plans to implement its ‘Free Basics’ program in India. Updated with statement from Facebook CEO Mark Zuckerberg below.

He took to the Twitterverse last night to express his irritation with the regulator’s decision with a statement that some on the Internet likened to colonialist attitudes. 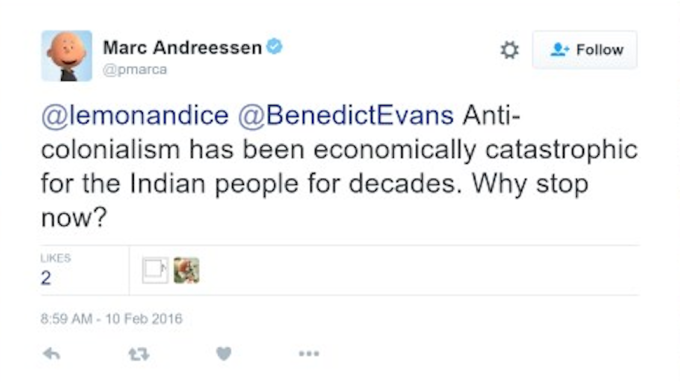 While this tweet (captured above by Gizmodo – the original has been deleted) is what drew the most ire from Internet users, the controversy started earlier around the TRAI announcement pertaining to ‘Free Basics’.

Denying world’s poorest free partial Internet connectivity when today they have none, for ideological reasons, strikes me as morally wrong.

Andreessen’s language drew quick comparison from Indian Internet users to the English East India Company. The EEIC was an English trading company which deployed a combination of mercenaries and guile to eventually come to rule most of what is now India from 1757 until 1857, when the British Crown assumed control.

Facebook’s Free Basics has been the subject of significant controversy in India over the past few months, with it and similar zero-rate services under fire for allegation of violating net neutrality. Free Basics is a Facebook program that has the company partnering with Internet providers in developing countries and providing free access to specific websites. In India, the company had been partnering with Reliance Telecom until regulator TRAI announced a daily fine for zero-rated Internet services operating in India. While the fine itself (around $750 a day) is just a drop in the ocean for Facebook, the decision does mark a victory for supporters of net neutrality in one of the world’s fastest growing mobile markets.

To his credit, Andreessen (or the A16Z PR team) quickly moved to apologize in a customary tweetstorm. Andreessen’s latest burst started last night when he announced his withdrawal from future discussions about Indian politics, and made it clear (in so many words) that he was against colonialism.

And for the record, I am opposed to colonialism, in any country. https://t.co/3ommgZssMm

He wasn’t through, though. A more eloquent apology arrived this morning, also via Twitter, which bot @pngmarca has nicely summarized for us.

“We strongly reject the sentiments expressed by Marc Andreessen last night regarding India,” the company said in a statement to the press.

While it’s hard to say if Andreessen’s Twitter behavior had any specific agenda in mind, statements like this by Facebook and members of its board will not help Facebook’s damaged public perception in India, where many see the Free Basics program as a poorly veiled attempt to acquire Indian Internet users as a captive audience for advertisements.

I want to respond to Marc Andreessen’s comments about India yesterday. I found the comments deeply upsetting, and they do not represent the way Facebook or I think at all.

India has been personally important to me and Facebook. Early on in my thinking about our mission, I traveled to India and was inspired by the humanity, spirit and values of the people. It solidified my understanding that when all people have the power to share their experiences, the entire world will make progress.

Facebook stands for helping to connect people and giving them voice to shape their own future. But to shape the future we need to understand the past. As our community in India has grown, I’ve gained a deeper appreciation for the need to understand India’s history and culture. I’ve been inspired by how much progress India has made in building a strong nation and the largest democracy in the world, and I look forward to strengthening my connection to the country.

Update: Andreessen further elaborated on his position with a series of tweets this afternoon.