Robots need excitement. If their lives don’t provide instead they’ll incite violence. Common sense. Simple common sense. But robots also need trash. That’s why the Trashbot is so cool. This robotic trash can will automatically sort all of your garbage, pitching metals into one can and non-recyclables into another. The project is still in its relative infancy but it’s surprisingly cool and clever.

Created in Pittsburgh by Vaish Krishnamurthy and CMU professor Koushil Sreenath, the Trashbot is basically made of a series of ramps. When metal or other materials touch sensitive plates the ramps switch and lead the trash into the proper receptacle. The team is part of HAX and have raised $100,000 to build a very simple – but working – prototype.

“The idea for the project comes from the confusion that is caused by the recycling rules themselves. With the exception of the most obvious items (e.g., plastic bottles, glass bottles, and cardboard), most people really don’t understand which items are actually recyclable. Personally, I have often questioned the ‘rules,’ wondering if, for example, something like the plastic bag inside of a cereal box is recyclable, and it goes without saying that I am not the only one with such questions,” said Krishnamurthy. “This confusion leads to good, recycling-conscious citizens trying to put as many questionable recyclables as possible into the recycling stream, thinking they are doing the right thing by doing so.”

All of this confusion ruins the recycling stream and contaminates the piles
and piles of junk that fill up recycling centers. The robot will be trained over time to figure out the difference between a piece of food-grade cardboard and an Amazon box. 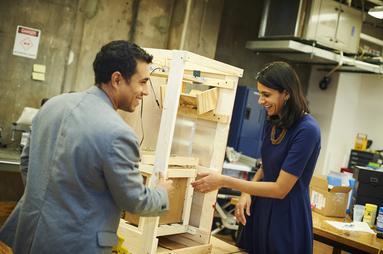 Unlimited use granted to Innovation Works and the companies that they represent and affiliates.

In short, the team is building a robot that can tell if a pizza box should be recycled or thrown away or the cheese stripped off the paper and eaten days after consumption of the actual pizza.

“As our project progresses, we plan to use a combination of manual training and data accumulation to keep increasing the accuracy and efficiency of the TrashBot,” said Krishnamurthy. “One thing is for sure – it will never be worse than the 20-35% recycling rate that humans are achieving today, and that is one of the main reasons why there is a significant need for our product.”

Maybe someday soon the robot can start processing the trash for food, a prospect that could encourage robots not to eat us.