Google is marking Safer Internet Day, which falls today, by introducing new authentication features to Gmail to help better identify emails that could prove to be harmful or are not fully secure.

The company said last year that it would beef up security measures and identify emails that arrive over an unencrypted connection and now it has implemented that plan for Gmail, which Google just announced has passed one billion active users. Beyond just flagging emails sent over unsecured connections, Google also warns users who are sending.

Gmail on the web will alert users when they are sending email to a recipient whose account is not encrypted with a little open lock in the top-right corner. That same lock will appear if you receive an email from an account that is not encrypted.

Encryption is important for email because it lowers the possibility that a message might be hijacked by a third-party. Google switched to HTTPS some while ago to ensure that all Gmail-to-Gmail emails are encrypted, but not all other providers have made the move. Last year, Google said that 57 percent of messages that users on other email providers send to Gmail are encrypted, while 81 percent of outgoing messages from Gmail are, too.

Another measure implemented today shows users when they receive a message from an email account that can’t be authenticated. If a sender’s profile picture is a question mark, that means Gmail was not able to authenticate them. 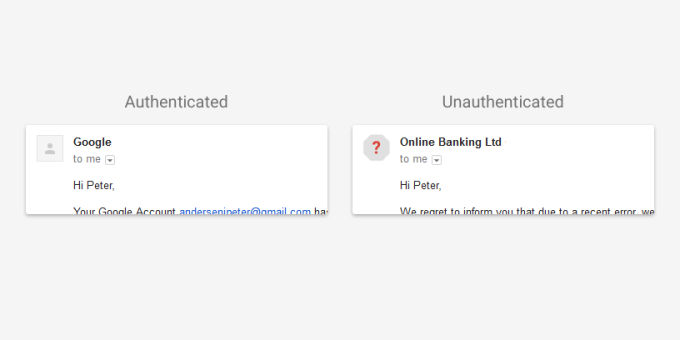 Authentication is one method for assessing whether an email is a phishing attempt or another kind of malicious attack designed to snare a user’s data or information.

“If you receive a message from a big sender (like a financial institution, or a major email provider, like Google, Yahoo or Hotmail) that isn’t authenticated, this message is most likely forged and you should be careful about replying to it or opening any attachments,” Google explained in its Gmail help section.

Unauthenticated emails aren’t necessarily dangerous, but, with this new indicator, Google is giving users more visibility on potential threats to help them make better decisions related to their online security.

Finally, because good news is supposed to come in threes, Google said today that it is gifting users 2GB of addition storage for Google Drive at no cost. To grab the freebie, simply complete the new security checkup for your Google account.

The process, which Google claimed takes just two minutes, will see you check your recovery information, which devices are connected to your account and what permissions that you’ve enabled. Google offered the same deal last year for Safer Internet Day, and the company said the 2GB expansion is open to all users — including those who snagged 2GB last year. (Small caveat: the offer isn’t open to Google Apps for Work or Google Apps for Education accounts.)

Simply head to your Google account to get started.