A number of technology companies took to the airwaves during last night’s Super Bowl 50 broadcast to make their names – and brands – better known among a mainstream audience. However, according to new data out today from TiVo, which historically tracks viewer engagement with Super Bowl ads across its network, the only tech company to make into the list of the top 10 Super Bowl ads was Apartments.com.

Its controversial advertisement titled “Moving On Up,” featuring Lil Wayne and Jeff Goldblum, was the #7 most engaging ad, said TiVo, falling in behind other popular household names like Pepsi, Doritos, and Mountain Dew, for example.

The ad was also most-watched, when compared with those from other tech companies, said TiVo. (That may not be a good thing, however, given that TMZ called out the advertisement for being “low-key racist” for its depiction of Lil Wayne cooking dinner for George Washington, a former slave owner.)

TiVo says it determines its rankings based on aggregated, anonymous, second-by-second audience measurement data from a sample size of approximately 30,000 anonymous households with TiVo’s service. Interest in an advertisement is based on what percentage of the audience is watching the ad in “play” speed.

The most engaging ads are those that see the biggest increase in viewership relative to the viewership in the surrounding 15 minutes of programming, the company also notes.

In addition to Apartments.com, other tech companies whose ads did well with viewers include Machine Zone’s $5 million ad for the Mobile Strike game featuring Arnold Schwarzenegger, which ranked #2 out of all tech companies’ ads.

Next was Amazon.com’s ad promoting its connected speaker Echo and the powers of its virtual assistant, Alexa. Amazon actually released a few ads touting Echo, though it had never before advertised during the Super Bowl.

PayPal’s ad, “There’s a New Money in Town,” performed well, too, as it snagged the fourth spot. 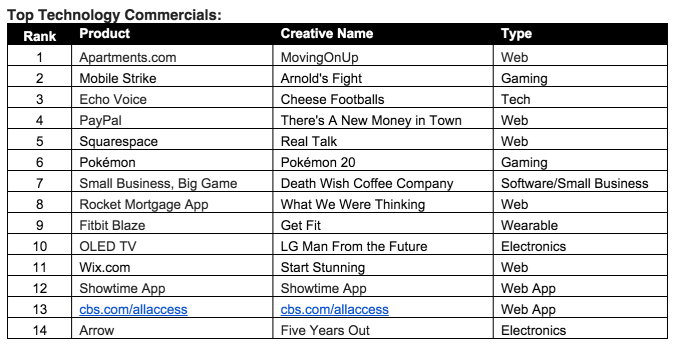 If you’re wondering where GoDaddy was – the company said it choose not to advertise this year. The company claimed the decision was not due to the criticism some of its former ads have generated, but rather because it no longer needs to work on raising its brand awareness, according to an interview with Recode.

Here are the top five ads in case you missed them: