Google launched an update to Android Wear today that brings a couple of new features to the smartwatch platform.

Maybe the most interesting of these is Android Wear’s ability to use the speakers that are now inside some of the newest watches. If you own a Huawei Watch or an ASUS ZenWatch 2, for example, you’ll now be able to go full Dick Tracy and make and take calls right from your watch. As Google notes, you will also be able to listen to audio and video messages from a number of applications that already support this feature, including Glide (remember Glide?).

Update: Huawai tells me the update will “roll out to Huawei Watches in the coming weeks, including the activation of the speaker that is already built into the watch.” So don’t expect this update to come to your watch right away. 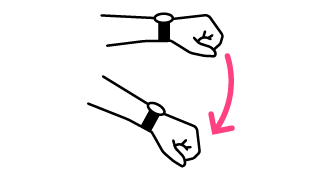 The update also introduces a couple of new wrist gestures. To expand a card, you can now hold your arm in front of you and then quickly push down. To go back, you can hold out your arm and quickly pivot up. To return to the watch face, you shake your wrist out and in a few times. Make sure you’re not in a porcelain store while you try these.

With this update, it’s also easier to messages from apps like Hangouts, Telegram, Viber and WhatsApp with a single voice command. “OK Google, Send a WhatsApp message to Mom: Need money for the stuff I just broke in the porcelain store.”

Overall, none of these new features are massive updates, but especially the new voice commands should make using the platform easier — the wrist gestures, I’m not that sure about yet, but that probably depends on personal preference.

What’s interesting here is that the update will roll out to all Android Wear watches, even those without speakers and first-gen devices.