Traditional cable TV providers are having to up their game as more of their customers cut the cord in favor of over-the-top options. Verizon, in a move meant to better serve and retain those customers willing to pay for a premium cable TV experience, today introduced a new feature called “Free View” for FiOS TV. This option lets consumers control when they’re able to access a free preview of a paid cable TV channel, like HBO or Showtime – access that used to be offered only by way of special, time-sensitive promotions.

Now, explains Verizon*, FiOS customers will be able to switch on free previews of the premium cable channels at any time. The feature will work with HBO, Showtime, Starz, EPIX and Cinemax, and will offer viewers a 48-hour preview window.

That’s quite a bit shorter than some of the other promotions, which offer free or discounted channels for a longer period of time – like a whole free month, for example.

It’s also much shorter than the free trials available for some of these networks’ over-the-top options. HBO NOW, for instance, gives out a free month for those who want to try its cross-platform streaming application. Showtime also offers a free month on iOS, Android, Amazon and Roku devices, and a free week when added to another service like Amazon Video, Hulu or PlayStation Vue. 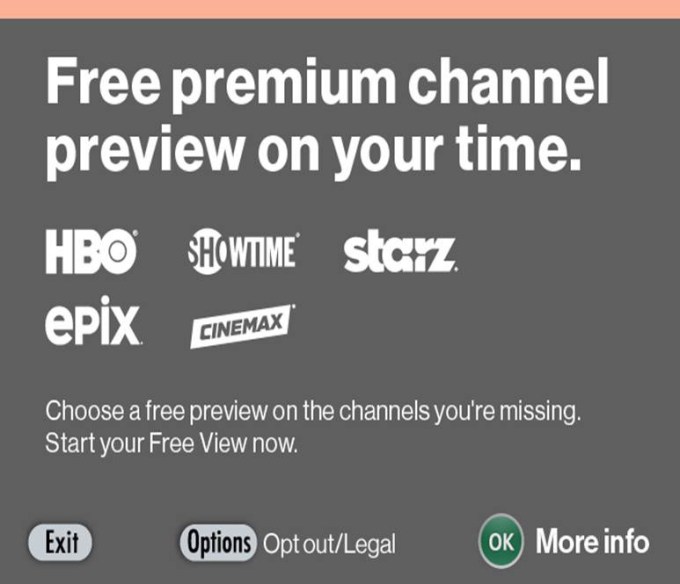 However, it makes sense that the TV provider would want to make it easier on those who were interested in premium TV channels to try them out without having to call customer service, or wait for a deal to arrive.

Verizon says that the free content is available on live TV, on demand, or via its FiOS Mobile application. Each channel can be previewed for 48 hours once per year.

This is the first time free previews have ever been able to be switched on by consumers directly, and it speaks to a company that’s looking to re-establish how its offerings are perceived in the cord cutting era. Already, Verizon had introduced “skinny” pay-TV bundles through its FiOS Custom TV option. This offers a core package of a few dozen basic channels which consumers can customized through niche-targeted add-ons.

The package had been criticized by some as giving the appearance of choice, when really consumers would end up with the same lineups they already had, by being pushed to add extras on top of their core package.

Dish’s Sling TV internet service takes a similar tack – it offers a core bundle for a cheap $20/month, which can then be customized with add-ons.

That being said, Verizon’s move toward unbundling is also an indication of how cable TV companies have been re-thinking how channels are sold and marketed to consumers. The same can be said for this new “Free View” option, as it lets consumers decide when they’re ready for free trials – just like those they could access if they were online, opting for the network’s streaming service instead.

The move comes at a time when Verizon is struggling to grow its pay TV subscriber base – the company added just 20,000 subscriptions in Q4 2015, down from 116,000 in the year-ago period. That was its lowest subscriber growth to date since its launch in 2006.  But at the same time, the company touted growing interest in its customizable bundles, noting that Custom TV accounted for one-third of video sales in the quarter.

*Disclosure: TechCrunch parent company AOL was acquired by Verizon. I had FiOS TV once, but cut the cord myself last year. Highly recommended.