Today the Orion capsule, NASA’s spacecraft designed to bring humans to Mars, starts its next phase of development at Kennedy Space Center. The remarkable part is that just this morning, that large spacecraft was at NASA’s Michoud Assembly Facility in New Orleans.

In order to carry Orion from New Orleans to Cape Canaveral, NASA recruited their Super Guppy aircraft. The Super Guppy has a cargo area that is 25 feet tall, 25 feet wide and 111 feet long. The jumbo plane can carry over 26 tons worth of cargo and is often used by NASA to ferry large components around the country that would take too long (or be impossible) to ship by land or by sea.

The Super Guppy’s history dates back to the Apollo program. It was used in the 1960’s to carry parts of the Saturn V rocket from California to Florida. The other option NASA had was to ship rocket stages through the Panama Canal, which would often take weeks or months longer. 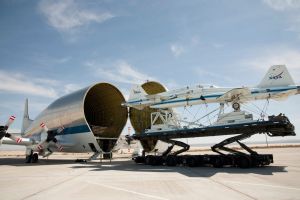 The large aircraft has also been used to ship NASA’s supersonic jets as well as modules from the International Space Station. Recently, the Super Guppy was used to carry Orion’s heat shield, which was the largest of its kind ever built, to Florida in 2013. 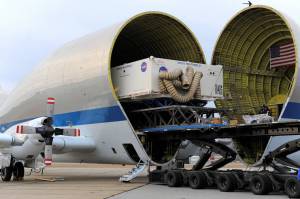 The Orion spacecraft, although not yet complete, is already precious cargo. The human-rated spacecraft is a crucial part of NASA’s mission to bring humans to Mars. Eventually, Orion will carry 4 astronauts and launch on top of NASA’s rocket-in-the-making, the Space Launch System (SLS).

An earlier version of Orion took its first flight in December of 2014. The mission, known as Exploration Flight Test 1 (EFT-1), brought Orion to an altitude of 3,600 miles above the Earth’s surface – more than 15 times farther than the International Space Station’s orbit.

The EFT-1 mission tested basic functions required for a crewed mission to deep space. NASA has said that data from EFT-1 was required to make key Orion design decisions and to validate existing computer models. It was also the first human-rated capsule to travel past Low Earth Orbit in over 40 years.

At the Michoud Assembly Facility, engineers had recently completed the pressure vessel that makes up Orion’s primary structure. Now that Orion has made it to the Kennedy Space Center, the pressure vessel will undergo a series of tests to analyze its structural integrity. 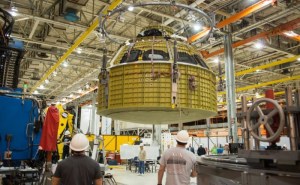 Eventually, Orion will be outfitted with its necessary systems and subsystems. After all of this is done, Orion will take its second flight (and its first flight on SLS), currently scheduled for 2018. Unfortunately this is 4 years after EFT-1, which helped garner a lot of public support for Orion and NASA’s journey to Mars.

Public opinion is crucial to any NASA program, especially under changing administrations. Launches are a great way to grab the public’s attention, but of course heavy-lift launches are expensive, so NASA must be selective.

Assuming no delays or changes in NASA’s mandate, Orion’s first crewed mission will take place in 2023. NASA hopes to use Orion to send humans to Mars by the mid-2030’s.