When we think of Saudi Arabia, we don’t imagine startups popping out of the desert. Yet the Kingdom’s entrepreneurial ecosystem is beginning to boom thanks to newly launched initiatives.

They met and created the startup at King Abdullah University of Science and Technology (KAUST), based in Thuwal, Saudi Arabia.

Launched in January 2015, FalconViz is now a team of 10 and has already secured $205,000 in seed funding from KAUST and is poised to close its first institutional round from Saudi-based VC funds.

“This is a first in Saudi Arabia” explains Mohamed Shalaby. “An investor investing in a Saudi company is extremely rare. They usually invest in US companies.” Shalaby says the attraction is the market size for surveying — $5 billion in Saudi Arabia and $10 billion in the US and Canada.

The company says its edge derives from the technology that was developed by engineers and scientists at KAUST.

The process can be broken down into three steps: First, high-resolution imagery is gathered using a specially configured autonomous UAV navigating a predetermined flight path. Second, the images, orientations and positioning data gathered during the flight are processed and matched together using Aerial SFM. Finally, an interactive 3D model is generated by Aerial SFM, offering a detailed documentation of the scanned area.

“Our technology is faster, more efficient and much less disruptive to building sites when used repeatedly” explains Anas Dahlawi, General Manager of FalconViz.

The cost depends on the type of service required. Surveying a developed area costs more than surveying an undeveloped area for example. “Our prices start at $5K per square kilometer” says Dahlawi.

The team has just received an official agreement from the General Authority of Civil Aviation (GACA) that grants them the license to fly their drones within the Kingdom.

The product has already been commercialized and the service sold to various clients in urban planning and real estate. Examples are Jeddah and Mecca municipalities, the Aviation Investigation Bureau (AIB) and Jeddah’s Kingdom Tower, a skyscraper under construction that will be over 1,000 meters high. They are all based in Saudi Arabia, except for two projects that were carried out in Dubai and Lebanon. This allows the startup to focus locally first, and expand internationally later on.

The team attended the UN Climate Change Conference in Paris where they introduced two notions: firstly, using their drones and technology as a standard tool to measure the energy efficiency of buildings, thereby allowing clients to locate and calculate the exact waste stemming from A/C leakages for example.

Finally, using UAVs instead of fossil fuel-based cars or conventional planes to do massive surveying, making the process more eco-friendly. Something to keep in mind seeing as FalconViz is getting ready to introduce their solar-powered fixed wing UAV. 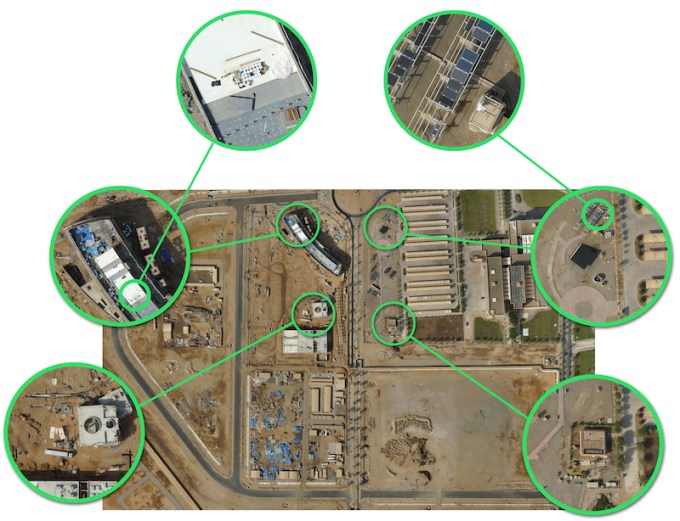