The business of sport revolves around stats — from those who use them to improve performance, through to enthusiasts who look at them for fun, or for more financial ends. Now a startup that helps make it easier for regular people to dig into and visualise sports stats has picked up some funding to grow. StatMuse, a startup out of San Francisco that currently lets you search for basketball facts and statistics through ordinary “natural” language requests, has picked up a $10 million round of funding to expand to new sports and services around the basic stats.

The Series A comes from the Walt Disney Company and TechStars (StatMuse was in a 2015 cohort in the Disney/TechStars Accelerator), along with Allen & Company, Greycroft Partners, Promus Ventures, Haas Portman, Deep Fork Capital, and Bee Partners. The round also included some notable names from the sports world: former NBA commissioner David Stern and United Talent Agency also chipped in.

The Disney involvement is strategic: after launching its public beta in the autumn of 2015, StatMuse signed a content deal with Disney-owned ESPN to provide statistical content during the 2015-16 NBA season, which looks like it is getting used online, on social media and TV.

StatMuse — which continues to be in beta — says it will use the funding to extend its search engine into other sports beyond basketball.

The idea behind StatMuse is not an uncommon one: there are very powerful search algorithms in the market today, but many of the most advanced used call up statistics and other analytics have been created in language more suited for data scientists, making them inaccessible to Regular Joes.

At the same time, there have been a number of innovations around big data, machine learning and natural language processing that are giving more analytics power to non-technical users, be they marketers or others in the business who could benefit from directly making their own analytical queries.

StatMuse’s founders Eli Dawson (CEO) and Adam Elmore (CTO) — childhood friends who co-captained their high school basketball team — saw that there was an opportunity to apply that principle to the world of sports statistics to tap into the general appetite not only to look up facts, but to view them in a graphic and engaging way. 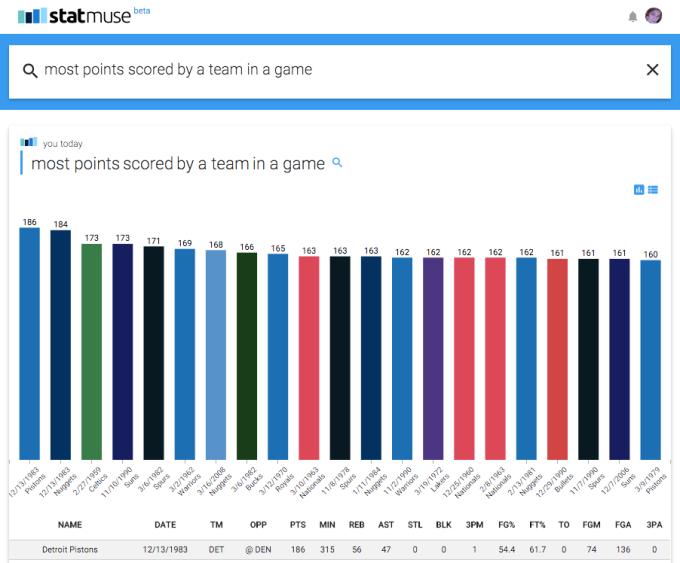 “We built a product for fellow sports fans interested in statistics and visual media. StatMuse is our vision for a highly engaging media platform that fuels sports discussion anywhere in the world,” Dawson said in a statement.

Today, you can go on to StatMuse’s site to look up all kinds of basketball stats, where the range of queries is very open-ended. I looked up “players named Larry,” who I could then re-order by their various other facts like points scored or minutes played. (Larry Bird is the reigning king of all basketball Larrys, you may be unsurprised to hear.)

You can then share the information to Facebook or Twitter, or to a StatMuse-only social network: you can also follow and be followed by people on the site itself, a format that lays the groundwork for a potential community of other sports nerds using whatever other features StatMuse launches next.

The service reminds me a bit of others like Graphiq or Tableau, which also let you look up trends and information and then visualise it. But while sites like Graphiq today seems mainly interested in a B2B play, courting publishers as users (disclaimer: TC/AOL are among them), StatMuse is potentially developing both the B2B (per its deal with Disney/ESPN) and and consumer angle, focusing specifically on the opportunity to provide better stats for sports.

Today, there isn’t really much of a narrative to be gleaned from the stats apart from what you see when your search results have been returned to you, but the longer term goal seems to develop products that will give those stats even more context — or at least work with partners, like ESPN, that will provide that context alongside StatMuse’s bare numbers.

“Sports is, by itself, the international language, but StatMuse has taken a giant leap forward, transforming sports statistics into meaningful, storytelling prose,” said David Stern in a statement.

As a pure content play, it’s unsurprising to see Disney taking an interest in the startup.

Disney is an old media company built around TV and movies, but it is fully trying to embrace the growth of digital platforms to make sure its business continues to grow.

That’s included acquisitions like the 2014 purchase of Maker Studios, reportedly for $1 billion; gaming companies like Tapulous in 2010; investments in hardware companies like BB-8 maker Sphero; and running its accelerator in conjunction with TechStars.

But given the clear indication that stats in sports can translate into big money, this could spell yet more opportunities beyond straight content for StatMuse down the line.