Amazon is clearly doubling down on its Alexa-powered connected speaker Echo, and the Alexa ecosystem as a whole – and not just because it’s now shelling out the big bucks to advertise the product during the Super Bowl for the first time, though that, too, is notable. But the company has also put its Amazon Appstore VP, Steve Rabuchin, in charge of Alexa’s growing business, including the Alexa App Store (aka “Alexa Skills”) and the teams inside Amazon working to bring Alexa to other connected devices.

Alexa, which is like Amazon’s version of Apple’s Siri, is a voice-activated assistant that lets you ask questions; create tasks and shopping lists; get information like news, weather and traffic; play music; set alarms; control your smart home devices; and yes – even, order things from Amazon.com.

While Amazon notoriously keeps sales figures around its products close to its chest, there have been signals that the affordable Echo speaker has turned out to be one of the company’s hardware hits, following the total flop of its Fire Phone and a re-organization at its hardware R&D group, Lab126. 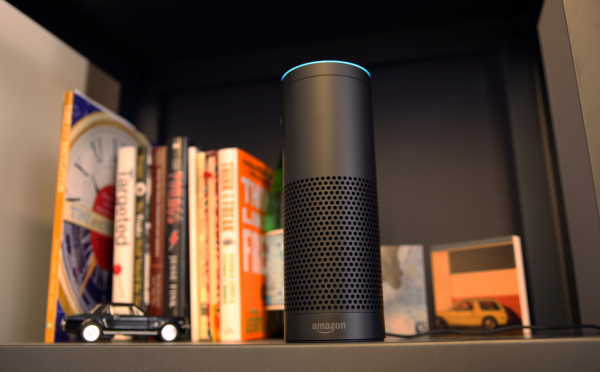 For example, Echo become the top-selling device on Black Friday 2015, for those devices over $100, and it has since continued to hold a top spot in Amazon’s Electronics Best Sellers list on its site. (It was #5 in January, and has since climbed to #4.)  The speaker also has a 4-and-a-half star rating, after some 31,000+ customer reviews.

There have been reports of Amazon developing a smaller, more portable, and even cheaper version of the Echo speaker.

Now, we hear that Rabuchin, the VP previously responsible for the Amazon Appstore, including the global app selection, developer outreach, business development, Amazon Underground, and more, has moved over to Alexa. This can be confirmed on his LinkedIn profile, which notes the title change took place this month.

According to LinkedIn, Rabuchin is now in charge of both the engineering and business teams who bring Alexa’s voice services (AVS) to connected devices and who help developers build new skills for the Alexa platform using the steadily improving Alexa SDK.

Before the move, Rabuchin had spent over two years as Vice President of Amazon’s Appstore.

Alexa’s own app store, meanwhile – aka the “Alexa Skills” section in the Amazon Alexa mobile application, which complements the Echo speaker – has also been growing in recent weeks. While a good number of today’s Alexa apps are not great – fart apps, joke apps and trivia games, for example – the selection has been growing.

As of earlier this month, the Alexa app store had reached 135 applications, including a handful of bigger names, including StubHub, AccuWeather, AOL (including HuffPost and TechCrunch…disclosure!), Automatic, Fidelity, Bandsintown, Automatic, and others.

However, to make the platform more useful to consumers, it needs to be easier to add and utilize these third-party creations, and the quality of the selection needs to improve as well.

Amazon has not yet responded to a request for comment about Rabuchin’s move.

Oh, and in case you missed it – here’s Amazon’s forthcoming Super Bowl ad, which features Alec Baldwin and Dan Marino using Amazon Echo. CBS has been asking $4.5 million to more than $5 million for a 30-second ad, reports Variety. Amazon won’t say when the ad airs or what it paid.