Apple today reported another record set of results, beating expectations with an all-time high profit of $18.4 billion and revenues of $75.9 billion, with some $216 billion in cash now on its balance sheet. But it could have made even more were it not for the strength of the dollar compared to other currencies. The iPhone maker said that in constant currency, Q1 2016 revenue “would have been $5 billion higher, reflecting an 8% year-on-year increase.”

“For perspective, that difference is the size of an average Fortune 500 company,” CEO Tim Cook said on the earnings call today. Total revenues would have been nearly $81 billion with constant currency.

In a graphic displayed prominently in the first slide of its supplemental earnings materials, Apple charted the decline of its revenues as the dollar has continued to gain strength against foreign currencies: $100 in Q4 2014 equates to $85 today. 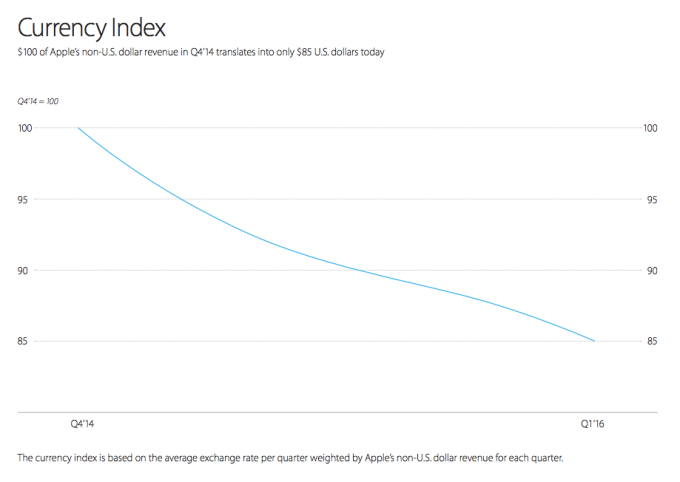 Apple also detailed how its revenues were impacted across different markets. It looks like Europe, China and Asia Pacific (excluding Japan) were the most significantly hit by currency with declines of 18%, 17% and 19% respectively. 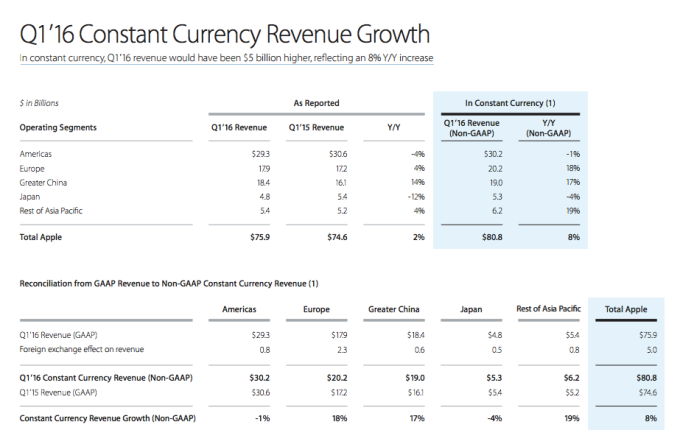 In particular, during the conference call, Cook singled out China’s economic pressures, noting that while the country continued to be a major market growing rapidly for Apple particularly in iPhone sales, the company started to notice “softness” in Greater China earlier this month, staring in Hong Kong. He said Apple would continue to invest in growth in the country. “We remain very bullish on China and don’t subscribe to the doom and gloom there,” said Cook.

India was another place where Apple saw a lot of currency issues, Cook noted, but the company is very much taking aim at high-growth markets like this for the future.

Currency headwinds have a bigger knock-on effect, too, as Luca Maestri, Apple’s SVP and CFO described it. Asked by an analyst about softening demand for its devices as evidenced by a decline in sales, Maestri noted that revenues will be down between 5 percent and 10 percent in constant currency, and that the macroeconomic environment in both developed and developing markets “is significantly weaker than a year ago.”

He noted that one of the things that Apple has done to respond to the foreign exchange effects is to increase the prices of some of Apple’s products to keep margins high. But he also said that inevitably, the higher prices also affect demand and, of course, overall sales.