As we head into 2016, enterprise chat applications like Slack are suddenly a hot commodity, and if you’re inside chat a good portion of the day the argument goes, you should be able to access other work without leaving the chat client. This is exactly what Workato’s newly announced chat bot, Workbot, is designed to do.

Chat bots are small programs that integrate with a chat platform and provide some advanced type of functionality in a fairly easy fashion. The new Workbot-chat bot enables users to access and control over 100 enterprise applications such as a Salesforce CRM record, Quickbooks accounting information or Zendesk customer service interactions directly inside of Slack.

One of the primary issues with early Enterprise 2.0 tools was that they were just another application busy employees needed to pay attention to. The idea here is to give users customer information directly in the context of the discussion they may be having with a fellow employee in an integrated fashion (or to simply get the information from the bot without prompting).

“One of the things we saw in early collaboration tools like Yammer or Salesforce Chatter was that after initial hype that we have a new tool and we don’t have to do email, people eventually got resentful that these tools became one more feed you needed to pay attention to and take care of,” Anshu Sharma, venture partner at Storm Ventures, one of Workato’s investor’s explained.

The idea behind Workato’s Workbot is to let employees interact directly with enterprise applications that matter to them inside the chat client — and bring a level of automation to that. It’s worth noting that it requires a certain language to get that information (much like you have to ask the Amazon Echo a question just the right way), but it’s also possible to create connections to enterprise apps with simple aliases like ‘customer info’ to reduce the amount of typing. 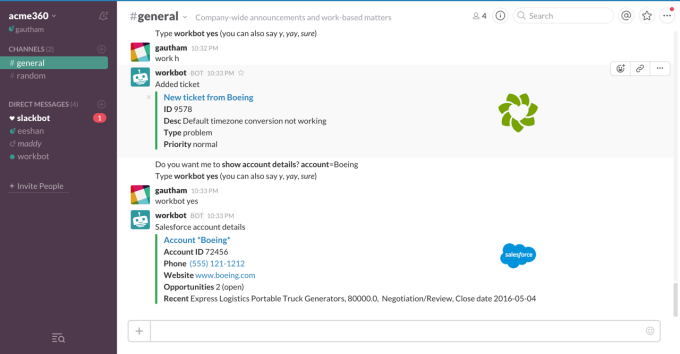 The tool has three main tasks. First of all, it can provide users with a full view of the customer inside of Slack, pulling the information from various customer information sources, but it’s not just a pure integration tool. It also provides a level of intelligence to the data by filtering more important information such as ticket priority, customer location or past due invoices. Finally, customers can define triggers so that if a certain threshold is met such as x number of outstanding support tickets, the customer service manager would get a message from Workbot inside of Slack automatically.

Workato is a company concentrating on simplifying enterprise integration. Instead of using expensive or complex enterprise workflow or integration tools, Workato’s goal has been to simplify the process so that non-technical end users could create integrations on their own, putting together “recipes” that created workflows, like IFFT has done on the consumer level.

This isn’t the first time companies have tried to integrate enterprise applications inside a messaging tool. We have seen it extensively in email  with many companies trying to integrate inside of Microsoft Outlook.

What’s more, in the early part of this century there was a short-lived attempt to make enterprise instant messaging clients  the center of our work lives, a vision that didn’t quite come to fruition.

It’s also worth noting that Facebook is trying something similar for consumers inside Messenger.

Workato also announced a private beta of Workbot for HipChat.