Facebook wasn’t built for sports. Its filtered, non-chronological News Feed made it tough to follow real-time chatter about the game. Twitter’s feed is great for it. But out of Facebook’s 1.55 billion users, there are a LOT of rabid sports fans who aren’t on Twitter. Facebook’s not actually trying to steal Twitter’s hardcore users as much as box it out of recruiting hundreds of millions more.

That’s why Facebook built its newest feature, Facebook Stadium. It’s a part of its main app for following sports games where you can watch play-by-play news, read commentary from athletes and critics, and cheer with friends. Facebook needed to change its perception with sports fans, and it was too late to do that by subtly adding real-time chatter into the News Feed as it’s tried before.

If you build it, maybe they’ll come. So Facebook erected Stadium as an explicit home for sports. It’ll be available to US iOS users for football games these next few weeks with more countries and sports to come. 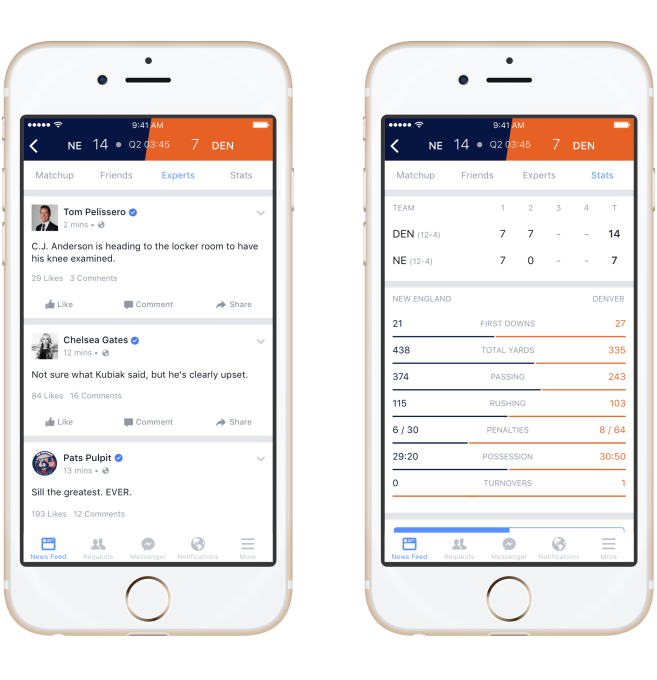 Until now, the social network’s own employees like Boz the ads boss used janky hacks to Facebook about sports. “#49ers Thread”, he’d post, and then comment on himself to add his color commentary. Otherwise, out of context, his short-lived reactions probably wouldn’t get enough Likes to be seen by many people. Still, it just didn’t fit right. 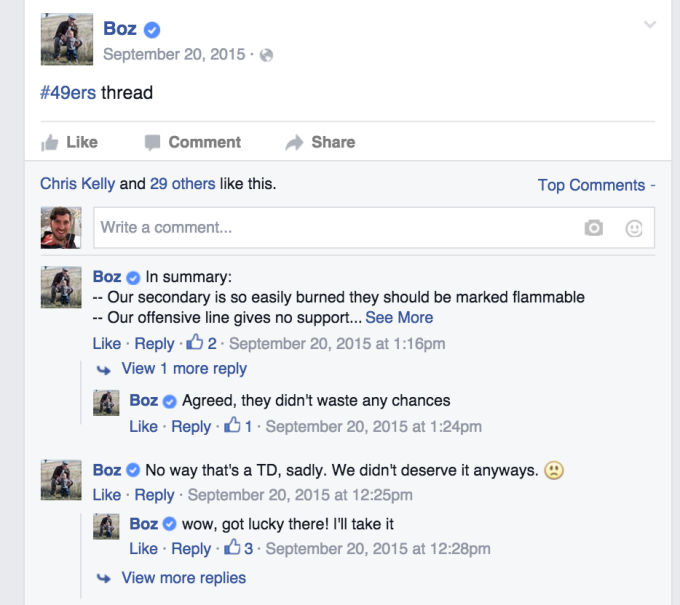 Facebook already has a ton of sports chatter scattered across its feed. 65 million booed, cheered, and quipped about last year’s Super Bowl. But that was despite it feeling like each user was stuck in a noisy, crowded bar where they were the only one who cared about the game. The name of the new feature is meant to evoke being surrounded by fellow passionate fans.

Twitter has Moments for following the highlights in a simple, lean-back format, and buried hubs for different sports leagues. And ESPN has a liveblog ticker of the action. But Facebook combines posts from athletes, pundits, and friends with a new idea that has tons of potential: making the play-by-play social.

If Facebook wins sports chatter, it will surely attract the advertisers too. It’s easy to imagine sponsorships or ads within Stadium, just like its real-world equivalents. Advertisers love the idea of reaching a huge audience simultaneously — owning a moment. Stadium centralizes attention to offer that.

An added benefit is that Stadium could keep sports content locked away from non-fans. A half decade ago, Facebook quarantined posts about social games like FarmVille, only showing them to those who played. The silos kept non-gamers from getting annoyed while making gamers feel less guilty about posting.

Stadium is the evolution of the hashtag and the trending topic, two less overt ways to create a digital water cooler where everyone talks about whatever’s most important in the world. It’s easy to imagine Facebook going beyond sports and building Newsroom for following breaking news events, or Living Room for discussing TV shows.

Then again, Facebook seems to take another crack at real-time each year. While the data might say it’s made plenty of forward progress, most still don’t think of it as where they go to read or post “HOLY CRAP HE CAUGHT IT!”

As with almost every product, what will really matter is how and how much Facebook promotes the feature to people talking about sports. With Stadium, we’ll see if Facebook’s can paint itself in team colors and rally fans without scaring away those who couldn’t care less about sportsball.