Twitter stock saw a mini-rally today after hitting an all-time low on rumors that News Corp was eyeing a tie-up with the company. Twitter didn’t comment on the report, and News Corp said the rumor is untrue, but the fact that the rumor surfaced and picked up speed so quickly points to just how precarious the company feels right now as a public stock and perhaps as a business, too.

More broadly, since Jack Dorsey took over as CEO of Twitter, the company’s shares have fallen more than 40 percent. And Square’s stock has dipped below its IPO price briefly. Granted, some of this is due to a larger selloff in the market, but given the extended decline for both Twitter and Square, things are not going well for Dorsey.

With low stock prices can come low morale, less opportunity to recruit top talent, and potentially the eyes of activist investors that see this as an opportunity to swoop in and capture board seats — taking the reins of the companies and installing their own layer of management. This is a fate that befell Yahoo, and we’ve seen how well that’s gone so far.

And all this, too, makes the companies attractive acquisition targets.

Let’s take a look at what’s happened since Dorsey has become the CEO of Twitter. Aside from its shares falling, the company has been unable to show sustainable user growth — which is a critical element to the company’s growth — despite its core business doing relatively well.

Square is still showing that it has yet to figure out its financials, which show widening losses. The company’s first earnings report will come in March, and it could show continued struggles with its core business as it looks for avenues for growth.

Dorsey himself isn’t immune to these struggles. According to a Forbes report, the dual CEO of Square and Twitter is no longer a billionaire despite his stakes in two publicly traded, previously hot private companies. This likely doesn’t bother Dorsey too much — he’s released part of his stock to Twitter employees and devoted some of his Square shares to the Start Small Foundation.

In short, Dorsey has a lot of work to do.

First and foremost on the list is figuring out how to reignite Twitter’s monthly active user growth. That’ll be important for the company going forward, because logged-in users offer an opportunity for better advertising targeting, which can generate a better stream of revenue rather than simply advertising against logged-out users.

Of course, Dorsey acknowledges this. He said it himself in a recent Twitter earnings call: “Our Q2 results show good progress in monetization, but we are not satisfied with our growth in audience.” There are a couple of potential reasons for this, but one of the primary floating theories is that the service is still confusing — whether that’s staying online, or signing up for the first time.

Twitter has also struggled with the dance between being a reverse-chronological service and offering the best tweets in a similar way that Facebook curates its news feed. Twitter head of engineering Alex Roetter, in an interview with TechCrunch, probably said it best: “Every time you open Twitter, we should show the best stuff to you.”

There’s also the question of how many characters Twitter will allow users to post, with reports that the company will extend its 140 character limit into something more and morph it into a more robust publishing platform. The service historically was meant for brevity, but users have themselves found new ways to post larger strings of text — usually in the form of screenshots. If history has shown anything, it’s the user base that eventually figures out the killer use cases for the service.

These are just a few examples of the confusing state of Twitter. The service, for better or worse, still needs to figure out what it wants to be despite having hundreds of millions of monthly active users. Twitter has tried to tell part of its growth story in terms of its logged-out users, but in the end, it needs to get those users logging in to the service.

That being said, there are bright spots to Twitter’s business. Twitter’s core advertising business has continued to beat expectations and grow at a healthy rate. That’s thanks to strong advertising products that the company has built, and a credit to the company’s ability to monetize its user base.

Twitter is also pushing itself hard as a development platform, which could help extend its advertising tendrils beyond just its core service. Again, this helps the company’s core business continue to expand, but there’s always an upper bound to these things. Twitter is competing with other development platforms, and has to convince developers that it is the best way to build and monetize their applications — after already once abandoning and having to apologize to developers.

But despite all this, Twitter shares are performing awfully.

In sum, Twitter needs to start growing again. It needs to figure out how to shift its product direction into something that simultaneously won’t alienate its existing users and attract large swaths of new users. And it’s something Dorsey and his team haven’t quite been able to figure out yet.

Beyond Twitter’s struggles is Square, which recently fell below the company’s initial public offering price. Square, too, has struggled to show investors that it can be a strong, profitable and independent company that is worth the billions of dollars it was previously worth in the private markets.

For an indication of how things are going, consider this: the company’s private financing valued it at $6 billion, and Square is now worth around $3 billion. Public markets are tough, to be sure, but that the company’s valuation has been cleaved is just another example of Dorsey’s big challenge to turn on Square’s growth engine. For better or worse, Square is now a turnaround story.

One of the nagging issues with Square’s financials was a disastrous deal with Starbucks, which continues to weigh on the company’s profitability. But the company still needs to show strength in its core business — and outweigh stumbling blocks like the Starbucks deal — if it’s going to appease investors and get that stock price higher.

Square’s primary business has been its point-of-sale service, which is supposed to make it easy to begin accepting money quickly and help small businesses spin up operations faster. That service is, of course, facing stiff competition from competitors and larger incumbents, but given that Square is pulling in a good chunk of revenue ($332 million in Q3), it seems to be doing relatively well — if not overly ambitious.

But the company has done rapid experiments to see how to expand its core business, including acquiring food delivery service Caviar and building other services like Square Cash, a Venmo competitor for exchanging cash with friends quickly. Whether this is Square’s avenue for growth isn’t clear just yet, but one thing is certain: the company itself is looking for new ways to ignite revenue growth as its growth in transaction revenue declines.

There’s still strong growth for the company’s transaction revenue, but as companies get bigger, that engine can slow down a bit — which makes the search for new businesses all the more important to sustain that growth. For a business like Square, that’s going to be key to convince investors it can be a strong, lasting and independent publicly traded company. 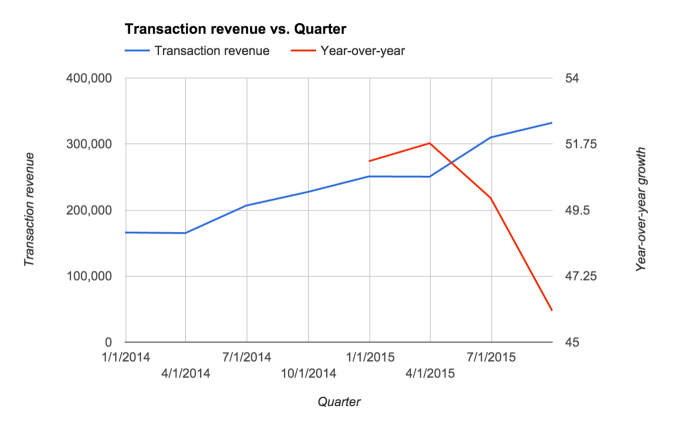 Dorsey’s path is going to be difficult. Running two companies at the same time isn’t unheard of, but running two publicly traded companies, both of which are struggling, is rare and a challenge.

For Square, Dorsey’s involvement in Twitter is listed as a risk factor. He was part of the original product development for Twitter, and of course built Square, but running two companies can lead to distractions and a difficult lifestyle. That can put a strain on his ability to run both companies, which have a combined $15 billion-ish valuation.

The question now is whether Dorsey, in his efforts to run two companies, is the right guy to get everything done.