Two astronomers at Caltech have found evidence that indicates the presence of a ninth planet in our solar system. If confirmed, it would transform the model of our solar system as we know it.

While the proposed planet has yet to be directly imaged, its gravitational influence on other known objects has allowed astronomers to detect its presence and determine its characteristics. 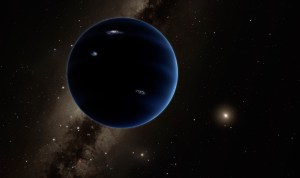 Illustration of Planet Nine which is thought to be gaseous, like Uranus and Neptune. / Image courtesy of Caltech/R. Hurt (IPAC)

Planet Nine, as researchers are calling it, has a mass of about 10 times that of Earth and 2 to 4 times the size of Earth’s diameter. It’s so large that it would be the fifth-largest planet in our solar system.

What makes this planet so unique is that it has a highly elongated orbit that “faces” a different direction than every other planet in our solar system. The orbit itself is so long that it would take Planet Nine between 10,000 and 20,000 years to complete one trip around the sun.

Interestingly, one of the astronomers responsible, Mike Brown, is the famed “Pluto Killer” who provided evidence that led to the demotion of Pluto as a planet.

Brown pointed out that Planet Nine is roughly 5,000 times the mass of Pluto. Unlike Pluto, the gravitational influence of Planet Nine is so strong that there is no question as to whether it would be categorized as a planet.

OK, OK, I am now willing to admit: I DO believe that the solar system has nine planets.

Discovery of this mysterious planet has been many years in the making. The Caltech astronomers, Brown and Konstantin Batygin, built on the work of others before them.

In 2014, astronomers Chad Trujillo and Scott Shepherd published a paper noting that over a dozen Kuiper Belt objects all had an odd feature in their orbit. It appeared that something with significant gravitational force was slightly “nudging” these objects throughout their trip around the sun. The Kuiper Belt is a disc-shaped region of icy bodies, including dwarf planets like Pluto, that extends beyond the region of the major solar system planets. 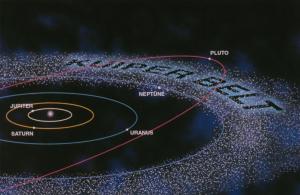 In an effort to explain these orbits, Trujillo and Shepherd suggested the possibility of a planet.

With this in mind, Brown or Batygin went to work to disprove that planet theory. The two astronomers worked for a year-and-a-half to investigate the irregularities in the orbits of the Kuiper Belt objects, proposing and testing alternative explanations. They even suggested the possibility of a large number of undiscovered Kuiper Belt objects, but that didn’t match up with current evidence of the total mass of the Kuiper Belt.

No other explanation made sense until they tested the idea of a large planet with an “anti-aligned” orbit, one whose closest approach to the sun is directly opposite that of the other eight solar system planets. At first, a planet in this type of orbit seemed unlikely. 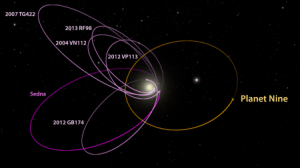 “Your natural response is ‘This orbital geometry can’t be right. This can’t be stable over the long term because, after all, this would cause the planet and these objects to meet and eventually collide,’” Batygin said.

But Brown and Batygin found that the orbits align just right to prevent any collisions. Over time, the astronomers were becoming increasingly convinced of the Planet Nine theory.

The next step to confirm Planet Nine’s existence is to image it directly. The challenge is, while astronomers have predicted its orbit, they don’t know where the planet is along that orbit. Depending on its location, it could be hidden in the images of previous sky surveys. If it’s not there, this will be a job for the world’s largest telescopes.

“I would love to find it,” Brown said. “But I’d also be perfectly happy if someone else found it. That is why we’re publishing this paper. We hope that other people are going to get inspired and start searching.”

After today’s big announcement, the race is on to be the first to image the newest planet in our solar system.