GarageBand has always had a definite appeal to the person adding tracks to his acoustic guitar performance or the band looking to customize their thrashing metal sound, but to the electronic music junkie the app hasn’t previously held much street cred.

Well today, Apple launched a huge new update to GarageBand for iOS that has a lot more appeal to novices (like myself) and will undoubtedly be much more popular with electronic musicians thanks to the addition of Audio Units and a new feature for crafting beats.

The real star of the show here is a feature called Live Loops which gives you a brand new way of producing tracks that’s more conducive to the task of building electronic jams. The grid-based interface allows users to highlight different cells to create stellar-sounding samples that you can customize endlessly. What results is a drum machine-style experience that’s kind of a blast to poke around with and is something that I bet you’ll see getting busted out at more parties in the future than you might expect.

When you open Live Loops initially, Apple has pre-loaded a full set of loops for the variety of sound categorizations, which includes EDM, Hip Hop, Dubstep, House and Beat Masher modes (among others), so yeah, Apple’s definitely looking to show electronic artists some love with this release. The stock samples sound great but after a bit you’ll want to dive deeper. That can mean swapping out loops from the hundreds of pre-made ones at your disposal or creating your own with the built-in keyboards. 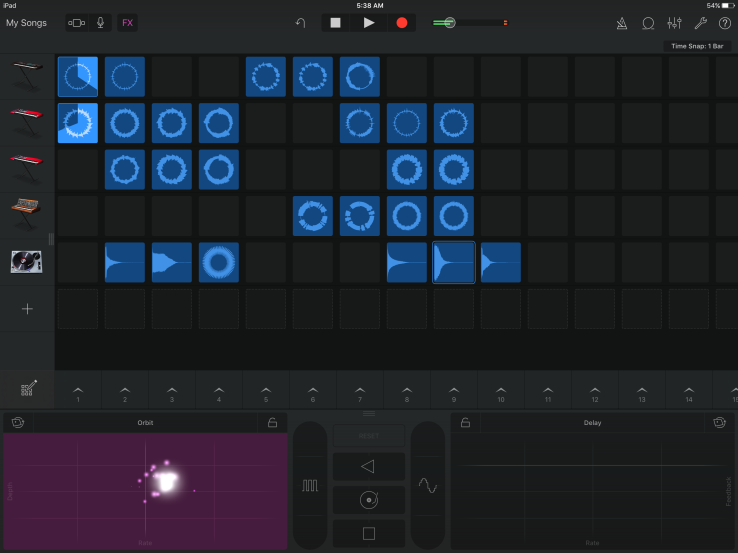 Once you’ve settled on some samples and have gotten used to playing around with the synced loop columns, the FX panel is where you go to add the hype to your tracks. Touch controls make adding wobble, reverb or repeat effects a snap and also made me reminisce at being back at a CES afterparty in Vegas, i.e. simultaneously geeking out to cool tech and saying “doooope” as I bobbed my head. Some of the features in the app seemed designed specifically for some major EDM showmanship. One of which is a button that let’s you control the FX by actually moving the device itself. Using the accelerometer to control the whirring orbit filter seems gratuitous and that’s because it really is, but it’s in more of a show off “yeah, this sounds awesome, doesn’t it?” sort of way.

Live Loops is something you mostly have to see more of to fully experience. I had some hands-on time with the new GarageBand while I was getting used to the layout, so check out the video below for some more insights into the version’s new style of making samples.

When it comes to crafting loops, this new GarageBand version also incorporates a new feature called Drummer which lets you add a virtual session drummer that has its own signature sound. The drummers are personalized with their own names and musical styles so some are better suited for EDM while others bring classic rock vibes. You can customize their sound quite a bit so there’s quite a bit of depth you can bring to “Jasper” and “Dez” if you want to explore their unique artistic styles a bit more. 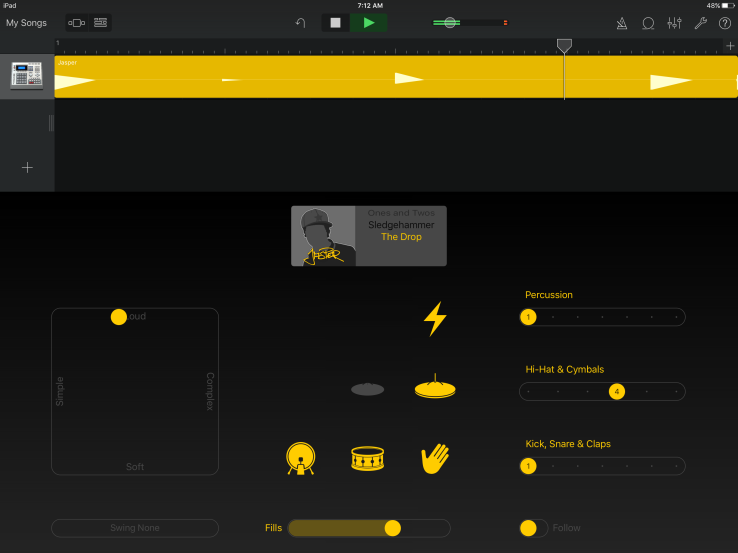 One thing more serious musicians have been looking forward to since it was teased a few months back is the addition of Audio Units to GarageBand for iOS. The feature lets you input third-party plug-ins to process sound in ways unique to other platforms. While testing out the new Live Loops feature, I added in a loop created on the Arturia iSEM electronic synthesizer and was able to do so without much hassle. 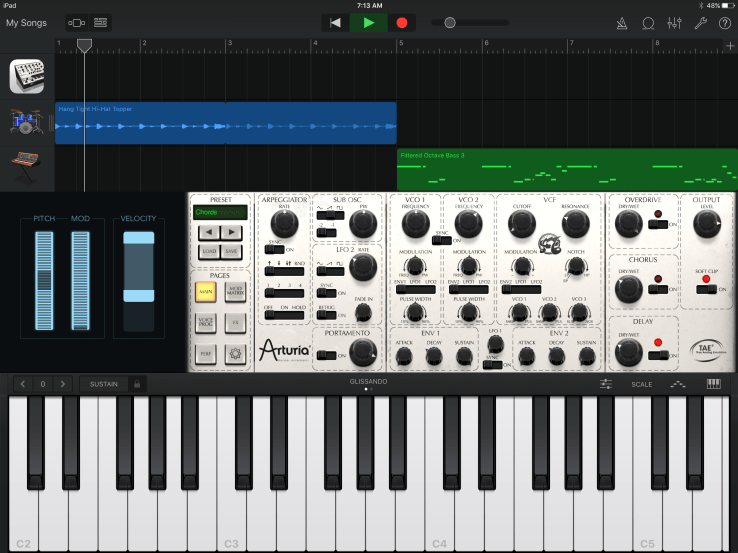 The experience is certainly optimized for the iPad Pro, but all of these features detailed are available on the less massive iPads and iPhones (as long as they’re running iOS9). Live Loops is actually a great interface for smaller devices like the iPhone especially. GarageBand’s Tracks layout can feel pretty cramped on the iPhone at times as one navigates it and it’s always been billed as a tool for mobile editing of playing around while you’re on the go, but with Live Loops you can actually create some cool stuff on your iPhone and open it on any of your other Apple devices later on, thanks to iCloud, and keep crafting.

GarageBand has always been a platform that has a good deal of appeal to serious musicians. Though some may favor a more “serious” audio production software like Logic when they’re looking to really finesse professional tracks, the 11-year-old music program has held its own among artists and casual creatives for quite a while.

Whereas the more-traditional Tracks layout of GarageBand was a blast for jam sessions or crafting rough cuts, GarageBand for iOS with Live Loops can be a bit more of a party, and one that is ultimately significantly more friendly to those with limited musical talent. The app comes pre-installed on iOS devices that ship with 32gb or more internal space, and I expect to see quite a few more people giving the software a chance thanks to the slick, sick new features.

GarageBand is available now as a free upgrade in the App Store and is compatible on any device that can run iOS 9.