Twitter has had a tricky Tuesday. The social media site went offline for several hours, covering a number of — but not all — regions, and perhaps partly in response to that, its stock hit a new low after it opened up for trading after the long weekend. The company’s stock went as low as $16.43, before finally closing at $16.69 for the day, down nearly 7% from its opening price.

Square, the other company led by CEO Jack Dorsey, also closed down nearly 8% at $9.47.

From what we’ve been able to see, today there were periods where Twitter was not working for a large number of its users, either partially or not at all, in London and other parts of the UK, Switzerland, and Bangkok (according to reports from our own team) this morning UK time. However, we also had initial reports from Palo Alto and other parts of the U.S. that seem to indicate it never dropped, although now as the East Coast is waking up, the service is wobbling once again.

Workers in affected regions sitting down to a little procrastination at their desks with cups of coffee had to stick to reading Facebook and Instagram instead.

More seriously, technical issues are never good, but for a service that trades on providing a real-time stream of information, they hit at the very core of the product. Twitter may be used as a diversion for many, but as part of its wider business expansion, the company has also been attempting to place itself deeper into the center of how people interact and communicate for more critical situations in business and emergency situations. Latency issues like the ones Twitter experienced today cast a shadow on those ambitions, and makes it feel less reliable. 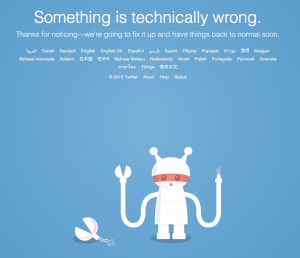 Twitter was once notorious for its downtime, but much of that has disappeared in more recent years. The company, in working to wipe away that image, in 2013 symbolically changed its technical difficulty page from the infamous “fail whale” to a little robot mechanic.

It’s hard to guess how much this outage affected Twitter in the public markets. That is to say, the company has already been seeing a lot of pressure on its stock price and so it’s unclear whether today’s activity is connected to the site’s performance. The company’s share price opened up $0.23 this morning before dropping again and dipping to $17.24, setting a new 52-week low. The company is due to report quarterly earnings on February 10.

The map-based Down Detector provides a visual guide for where service may be interrupted. It may be showing a delayed status, however: earlier it was indicating a fault in the UK when service was back up.

Twitter itself is noting in its developer dashboard that four parts of its service — /1.1/friends/ids, /1.1/search/tweets, /1.1/statuses/home_timeline and stream.twitter.com — are seeing varying levels of service disruption and performance issues. User Streams appears to be operating normally.

Twitter’s status page on Tumblr, meanwhile, gives little clue as to what actually happened in the short message posted an hour ago:

“Some users are currently experiencing problems accessing Twitter. We are aware of the issue and are working towards a resolution.”

A spokesperson contacted by TechCrunch said there was nothing to add to the statement for now.

We are updating this post as we learn more.