Fresh from raising new funding, Uber China — Uber’s dedicated business in the world’s largest country — is embarking on its largest expansion to date which will increase its coverage to 37 cities, up from 22.

Uber China has slowly expanded its coverage of China with launches in large cities thus far. In a change of approach, it said today that it will launch in 15 new cities in Sichuan, China’s fourth most populous province, before Chinese New Year on February 8.

Sichuan, a 485,000 km square region with a cumulative population of over 80 million people, is already a hotspot for the company. Provincial capital Chengdu is Uber’s top city worldwide, based on weekly completed trips, and it reached the number one spot just nine months after Uber launched there. And there’s apparently promise of more: Uber said its volume in second city Mianyang, where it launched in November, is forty-times higher than Chengdu was at that stage of launch. (Uber didn’t give raw figures for either city, though.)

Now, it is homing in on the region and expanding its coverage into tier-two and tier-three cities in Sichuan. Uber told TechCrunch it already ‘soft-launched’ in five cities, but it is targeting an additional ten in order to fully cover the main cities in Sichuan ahead of Chinese New Year, which is the largest annual migration on the planet as urban-based Chinese return en masse to their hometowns for the holidays.

More broadly though, this expansion is a sign of things to come for Uber in China this year.

The company declined to disclose specific expansion plans for the year when we asked — citing the need to keep information confidential and away from competitors — but last year it revealed it would take its coverage to more than 100 cities in 2015. This move in Sichuan looks like phase one.

“We have built a strong foundation across the country and have put in place an excellent local team that will drive our growth in the year ahead… our goal is to be in 100 cities across China by the end of the year,” Liu added.

Reaching 100 new cities inside 12 months is a huge task, but even if Uber is able to pull it off, the company will still trail local leader Didi Kuaidi on total national coverage. Didi Kuaidi, which is valued at $16.5 billion versus Uber China’s $8 billion tag, is present in over 360 cities and towns — and is reportedly at break-even in more than 100 of them.

That’s not quite all from Uber China in Chengdu. The company also said it is opening up ride-stations in “well-known” landmarks across the city. The idea is to create designated areas where drivers can meet passengers — similar to ‘suggested pickup points’ it is testing in the U.S. — because it can be surprisingly hard to rendezvous, particularly if a passenger is new to, or visiting, the city and not familiar with its road system.

Oh, and they are “Panda-themed” too 🐼 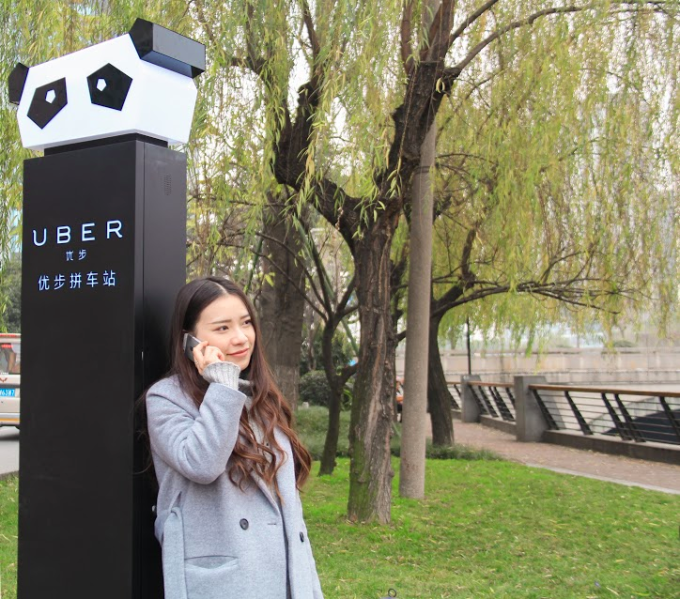