Another day, another series of Silicon Valley e-commerce explosions: Gilt Groupe just sold for a fraction of its valuation (and its capital raised) and One Kings Lane is reportedly the next to die. Previously it was Fab.com being sold for nothing after severely underperforming — ah, Fab, the first billion-dollar retail “unicorn” born with crossed eyes and a trick knee.

Marc Andreessen, Silicon Valley’s Brobdingnagian Sloth Fratelli overlord, called Fab an “e-commerce category killer” just 24 months before Fab itself was killed. Prior to Fab, Groupon had its hyper-embarrassing tango with the stock exchange, losing 90 percent of its worth. Then there’s Living Social, which I believe is in the middle of some super sad business pivot where it now sells maps to celebrities’ homes or something like that.

So how could so many retail startups with so much important VC money be so ill-fated? Let’s peruse the offerings in these digital junkyards and find out for ourselves. 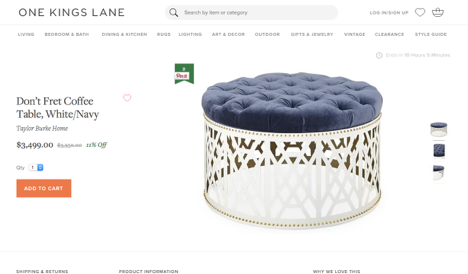 Behold this “Don’t Fret Coffee Table™” from the wizards at One Kings Lane. Because clearly someone with thousands of dollars to spend on an ottoman would say to themselves, “Why go to a reputable store and get great customer service when I could blow my wad here, in the unproven land of One Kings Lane, and save 11 percent!?! After all, like most people in the $3,400.00+ faux-Victorian ottoman price range, I’m a discount shopper.” Nailed that customer mindset, 1KL. Nailed it.

What’s for sale on Gilt in 2016? Why these fugly, shiny shoe-boots that look like they got trapped in a factory conveyor belt. Ugg boots — much like Gilt’s flash sales themselves — were popular exactly nine years ago. 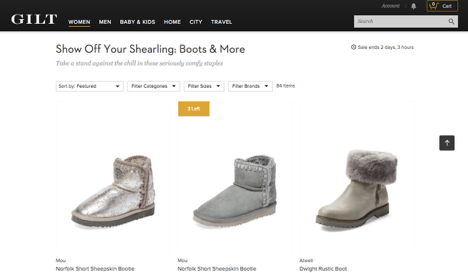 Come to Groupon for your discount bikini waxes! Because if a stranger’s going to pour hot lava on your bikini area, nothing assuages your fears like knowing you paid them less than his or her worth. Up to 66 percent less, in fact. 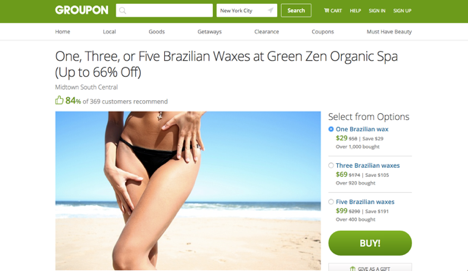 Now we meet the junkyard e-commerce category’s supreme leader — Wish.com. Wish is doing the previously impossible: raising a shit-ton of money without even pretending to be fancy or good.

Forget the legends of a rebellious young Mark Zuckerberg showing up to meet with venture capitalists sporting a hoodie instead of a suit. Wish didn’t even shower or wear clothes. There is no Don’t Fret Coffee Table™ for sale on Wish.com — oh, hell no!! Wish.com is a multibillion-dollar-valued company. Here’s its homepage, which I consider to be the Andreas Gursky of giving up: 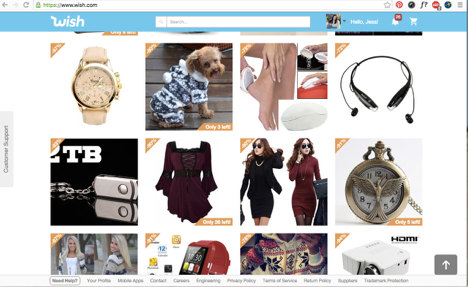 Is that dog dying? Can somebody call a vet? And what the hell kind of watch is a, I can’t even see the logo, wait let me zoom in, a Fashion Geneva Roman Numerals Faux Leather Analog Crystals Wrist Watch™? Is this a place to shop for your worst enemy?

Want to know how much of that $578 million they’re going to lose? My guess is, all of it. I can’t imagine a world that needs Wish, not even during the first intergalactic war.

Why do I blame venture capital for most of these failures and not the founders themselves? Because most of these sites (stupid tech-bubble-byproduct bullshit Wish.com not included) were once interesting offerings. There was a time when Gilt absolutely ruled NYC. There was a time when Fab was the greatest, prettiest thing we’d discovered on a screen. And there was an interesting and viable idea behind One Kings Lane — at one early juncture.

The trouble for all of these businesses came in the steroidal scaling process, not the business inception process. Sometimes a great idea for a small-to-midsize retailer is a terrible and impossible idea for a huge one.

Another reason for this loud series of abysmal failures may have something to do with gender. One commonality through all of these e-commerce sites is that they sold to women:

What does Silicon Valley’s vainglorious venture capital system lack? Women! Women make up as little as 4 percent of deal-making venture capitalists in the Valley. Perhaps in the hubris of backing but not comprehending a category in which women play a very significant role, Silicon Valley is now getting its just desserts.

All Silicon Valley VCs with egos great and greater: Shopping is trickier than you thought. Admit defeat and quit while you’re behind.