Uber China, the U.S. ride-sharing firms standalone company in China, finally closed its long-awaited Series B funding round yesterday ending a long process that began last summer, when many of the company’s financial details were leaked to the public.

The fundraising values the Uber China business at $7 billion — that’s a pre-money figure — but the size of the round, which the company said was over-subscribed, was not disclosed.

You can take that lack of disclosure around the amount raised as you’d like. An indicator that it fell short of a reported $2.5 billion expectation (having raised its initial $1.2 billion target), or a business decision to keep private things private?

Uber China also declined to reveal its full slate of investors when we asked. The roster does include existing investor Baidu, Uber Global and non-China-based backers, and those revealed publicly appear to be potentially useful allies.

Uber China was particularly keen to talk up the significance of HNA Group.

“The two companies will work together to develop innovative travel solutions for Chinese and global travellers, taking advantage of HNA Group’s global network of interests covering aviation, financing, logistics, and tourism,” it said in a press release.

Uber is hugely bullish about China, and for good reason.

Plus, Uber China’s business is doing a lot better than many expected.

The company reach one million completed rides per day across China — where it currently covers 22 cities — this past summer. That’s close to being more than Uber does across the rest of the world combined each day.

Then there’s the fact that four of Uber’s largest cities, in terms of ride volume, are located in China. No surprise then that the company is looking to go live in 100 more cities in China this year.

To take Uber/Uber China’s own words from its Series B deck — which TechCrunch got hold of — China is the world’s “most compelling market right now.” 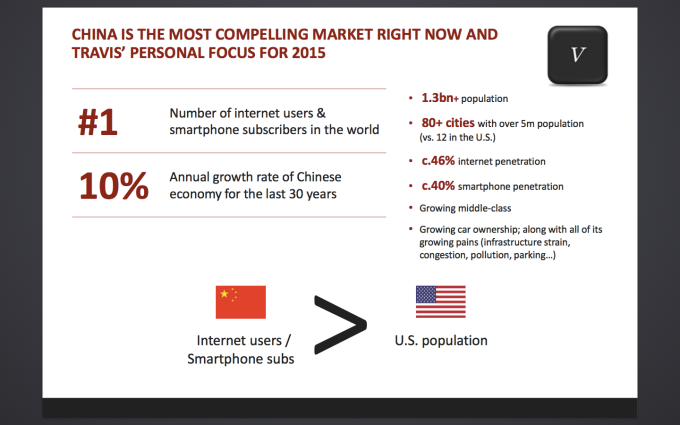 Uber is seeing much faster uptake in China than in the U.S..

(Much of that is likely because it wasn’t the first to pioneer the industry in China, as it did with Lyft in the U.S..) 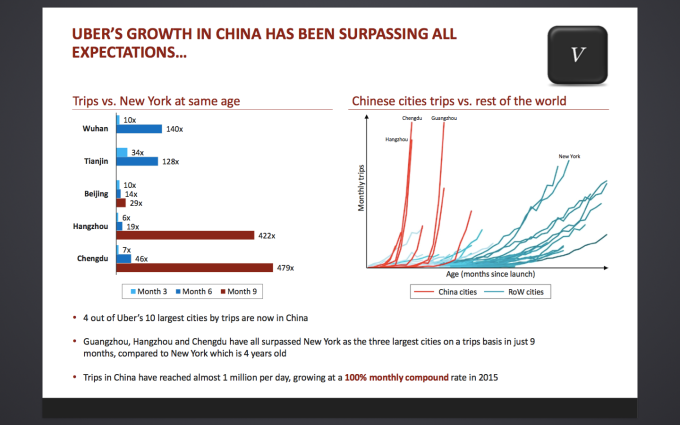 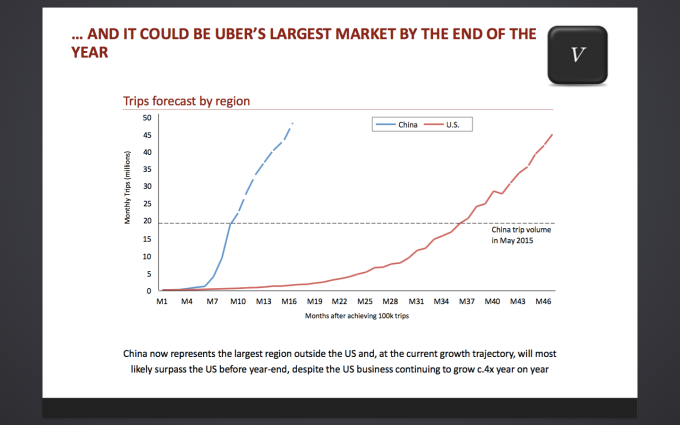 The company believes that Uber China can break even by 2018 on annual net revenue of more than $2.4 billion. 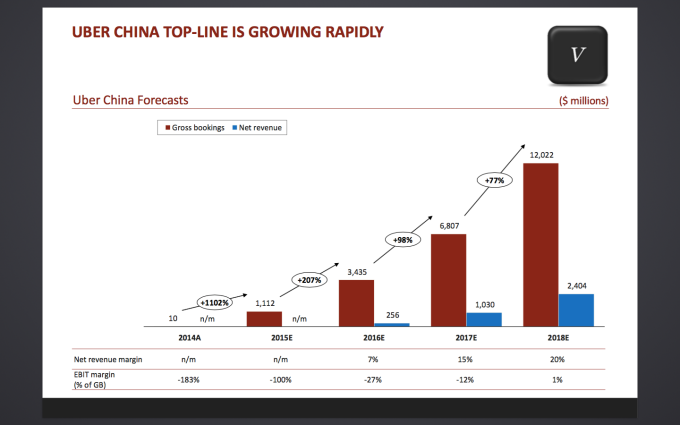 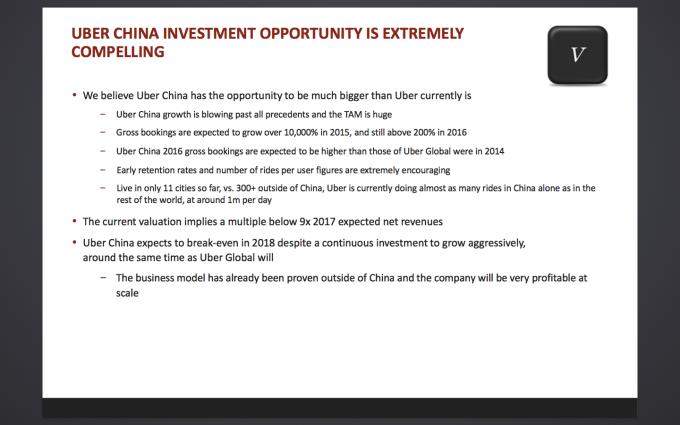 But — and here’s the big but — despite impressive growth and figures, Uber is playing second fiddle to Didi Kuaidi in China.

The Chinese company, which was formed through a multi-billion dollar merger of China’s top two Uber rivals one year ago, is ahead on every front:

One bright spot for Uber in China is that the company pioneered, and led, the peer-to-peer transportation bracket in the country. Uber claimed, in its deck, that it is dominant on peer-to-peer bookings in a handful of major cities though it declined to reveal which ones.

That early-mover advantage didn’t last all that long. Didi Kuaidi started out working with licensed taxis and private (“black”) car drivers but it stepped into the peer-to-peer space in June 2015. Given its brand and reach in China, you’d expect that it is narrowing any gap that Uber had over it.

Uber CEO Travis Kalanick told a press event that any lead Didi Kuaidi has is down to the company spending larger amounts on driver subsidies and promotions for passengers.

“They spend more per ride than us. It’s easy to find the information — you can talk to your local Uber or Didi driver and ask them how much they’re getting. This means that if they are bigger than us, as they claim they are, then they must be spending more,” Kalanick said — according to quotes supplied by Uber China’s PR team.

“Our best information right now is that Didi is spending US$70 million to US$80 million a week on subsidies — that’s US$4 billion a year,” the Uber chief added. 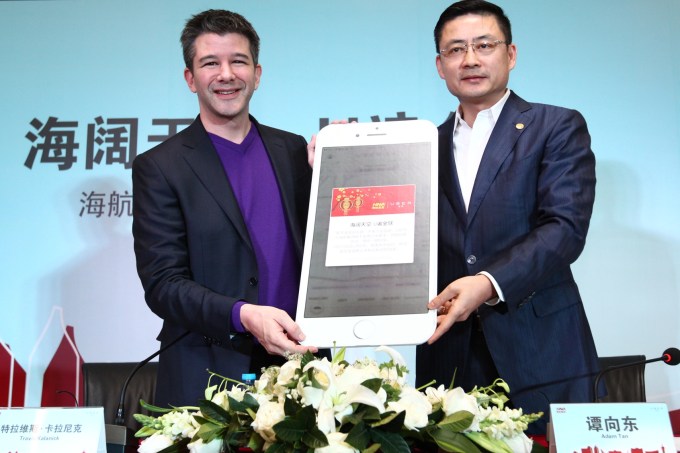 That, Kalanick argues, is proof that Uber is around for the long-term and is being smart about its spending. Uber has also complained bitterly that Didi Kuaidi investor Tencent has locked it out of WeChat, China’s top social platform and a key service for interacting with consumers, which — rightly or wrongly — is a factor.

Even if Uber continues to be an also-ran in China, much like Lyft is in the U.S., the country still stands to be a hugely important for it. This year it’ll be interesting to watch how Uber expands its footprint into more cities and whether Uber China raises additional money and (finally) appoints a country head. On the latter point, the company claimed that its business is run by local and regional teams but it already has a figurehead in India, and thus it stands to reason that it will do the same in China — assuming it can find the right person to drive its business forward.