The lawsuit, filed in November 2015, accused Uber of charging customers the “airport fee toll” several months before the airport required it, letting drivers keep the fee instead.

The lawsuit, which affects an estimated 355,000 customers, was a surprise to many folks who had no idea they were involved.

California charges passengers a separate fee for using rideshare services going to and from the airport. This is because the California Public Utilities Commission classifies Uber, Lyft and other ridesharing services as transportation network companies, separating them from taxi services and imposing a separate transportation fee of $3.85 to transport customers.

Passenger Vamsi Tadepalli, who initiated the class action lawsuit, accused Uber of fraudulently charging him a higher $4 fee in late November 2015, and of letting drivers keep the fee instead of passing it onto SFO, where the fee was intended to go.

According to the suit, Tadepalli said Uber told him the fee would be used to reimburse drivers who were charged SFO’s transportation network company fee. But according to the lawsuit, Uber was charging the fee earlier than the airport started requiring payment. Uber charged Tadepalli the fee in July 2015; SFO didn’t start charging drivers a transportation fee until November 2015. 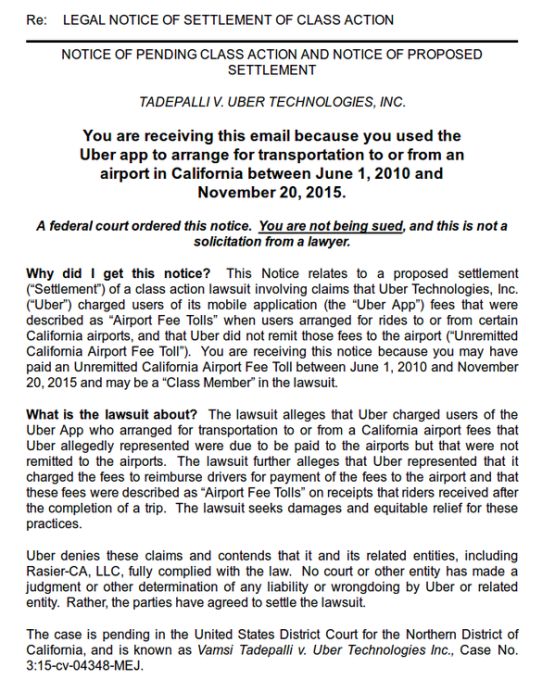 The lawsuit alleges customers were improperly charged an airport transportation fee between June 1, 2010, and November 20, 2015. None of these fees were reimbursed to the airport but were kept by drivers, according to the suit.

The suit also accuses Uber of excessively charging passengers by rounding up to $4 instead of the $3.85 fee.

“Although, SFO announced that in the future it will charge Uber $3.85 to pick up and drop off passengers – Uber’s $4.00 SFO Airport Fee Toll will be excessive and result in customers paying more than they should pay under the circumstances,” the class action lawsuit stated.

Not everyone using the Uber app within that timeframe may have received an email notification of the settlement. However, tens of thousands of passengers may have been affected

According to the lawsuit, Uber denies any wrongdoing and maintains it stayed within the law. We’ve reached out to Uber for comment and will update this post as soon as we hear back. The case is still pending.