The number of mobile addicts is increasing, according to a new report released this morning from Yahoo-owned mobile analytics firm Flurry, which found that 40 percent of the 58 percent total growth in mobile app sessions came from existing users in 2015. That’s a significant increase from the prior years, the company noted, as existing users only accounted for 20 percent of growth in sessions in 2014, and just 10 percent in 2013. While all categories of apps grew, “personalization” apps lead the others, largely thanks to the popularity of emoji keyboards, the report found.

The fact that most of 2015’s growth in app usage, along with a slowing growth rate overall, points to a market that’s maturing.

Though 58 percent growth is still remarkable, the growth rate has been steadily dropping over the past couple of years. In 2014, mobile app usage grew by 76 percent, and in 2013, it grew by 103 percent. In other words, instead of relying on new users to fuel growth in app usage, it’s more important than ever for app developers to re-engage their existing users – getting them to come back and then spend more time in the app.

The year-end report also tracked which types of apps saw the most growth, in terms of app usage. Outside of games, which declined 2 percent, Flurry says that every app category posted year-over-year growth in 2015, but it was Personalization apps, News & Magazine apps, and Productivity apps that saw the largest jumps in usage. 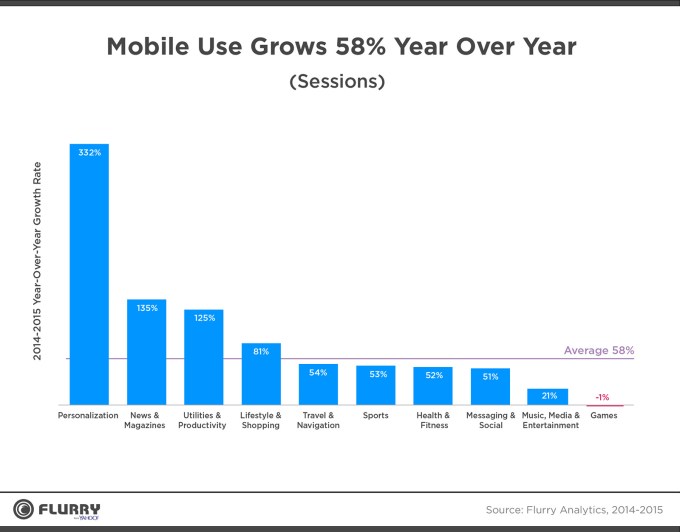 Personalization apps, which include things like Android lockscreens and emoji keyboards, saw a 344 percent increase in sessions – and this was mainly due to emoji apps, the firm said. This trend is also directly tied the rise of messaging apps, like Facebook Messenger, Whatsapp, LINE, and Snapchat, where users want to be able to customize their texts to friends.

Meanwhile, News & Magazine apps grew their sessions 141 percent in 2015, as more user shifted their media consumption away from TV and desktop computers to smartphones and “phablets” – the latter form factor which Flurry previously pointed to as having dominated holiday sales.

App usage for Productivity apps also grew a notable 119 percent last year, as people are doing more on their phones, phablets, and tablets, including activities that are still moving off the desktop – like email, or work productivity apps like Microsoft Office, Google Docs, and Slack.

Lifestyle and Shopping apps were in fourth place with 80 percent session growth, thanks to the fact that more consumers today shop from their phones. Flurry notes that this figure backs up earlier reports from the year which stated that mobile commerce now accounts for 33 percent of e-commerce in the U.S., and 40 percent of e-commerce worldwide.

This trend is also likely why Apple decided to give Shopping apps their own Category in the App Store just a couple of months ago – not only are consumers doing more mobile shopping, the launch of Apple Pay has made checkout easier, with retailers reporting a more than 2x increase in checkout rates thanks to Apple Pay integrations.

When Flurry broke down app usage by form factor, it additionally discovered that phablet users were even more engaged with apps than those on smaller smartphones. For example, growth in News & Magazine apps on phablets was 4.8x that of all devices; Sports and Music, Media & Entertainment apps were also higher at 4.6x and 4x, respectively.

Plus, time spent on phablets grew 334 percent year-over-year (2.9x more than the average), compared to 117 percent for all form factors. With the holiday sales contributing to phablets’ ongoing growth, Flurry believes these devices will be the top form factor by October 2016.

Given that phablet users spend more time in their apps, and the form factor overall is surging, it’s not surprising to see this has had a direct impact on app session growth throughout the year. And that trend shows no sign of slowing – Flurry says it believes small phones will be extinct by the second quarter of 2016.