Magic Assistant, an SMS-based personal assistant service, is rolling out a new plan that provides a more premium service for $100 an hour. Magic’s new service, Magic+, is built around getting anything done rather than accomplishing simple tasks for a fee.

Magic hopes it can complete complex tasks that range anywhere from planning a large-scale party at the last minute to even ordering a private jet when a flight is delayed, CEO Mike Chen said. With Magic+, the company wants to be powerful enough to completely replace the executive assistant, Chen said.

“The power user segment really started to evolve, celebrities, actors, CEOs, investors, etc., who had really difficult requests,” Chen said. “Difficult, I guess, for other people, you can’t really get them done anywhere else. Some of the stuff people are using Magic for is kind of the convenience layer, they’re coming to us with stuff you can’t get done any other way.”

Magic will still have its free tier, where you only pay if Magic buys you something or contracts labor for you. There’s still a waitlist for Magic, but existing Magic users can sign up for Magic+ now. 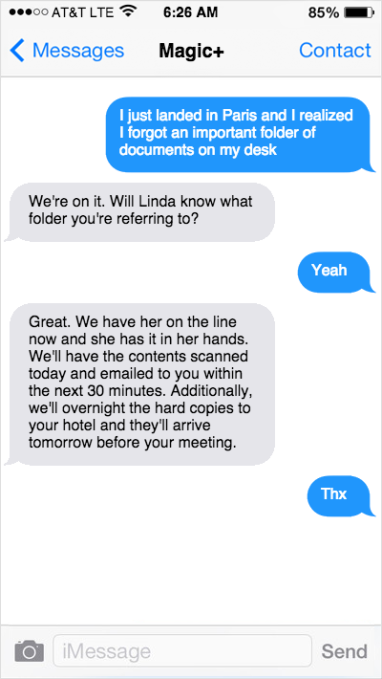 The service only charges for the time that it’s used. So, for example, if you want to order groceries and it only takes around 15 minutes, you pay $25 instead of the full $100. The service is available 24/7, Chen said. Chen said he hopes that the price will come down as the service becomes more efficient.

“We have users who tell us they would happily pay more, but our goal is, we’re not trying to charge as much as we can, we think this is the right price point at this service,” he said. ” It might take a few minutes, at $100 an hour you’re still talking a few dollars.”

Here’s an example use case: One user needed a venue for a corporate, televised event. Magic+ fulfilled the request by renting out the Exploratorium, a stage, and furniture for the event, as well as catering it and setting it up to be televised.

Magic isn’t the only one building a personal assistant based on messaging — there are others like Alfred and it faces a huge challenger in the market: Facebook. The company’s personal assistant, “M”, is designed to over time learn how to operate autonomously, but in the mean time is mostly powered by humans. If anything, it shows how important creating a more seamless experience that’s built around language instead of a user interface has become.

“The best way to understand how we sit in relationship to them, some of them have taken the approach of, ‘we’re really gonna focus on this idea of getting things over chat,’ that’s the exciting part for some of these companies,” Chen said. “You used to order your shoes over Zappos, now you order it over chat. That’s the purpose of those businesses, there certainly seems to be a market for that. Where those services drop off, when you want to get something complex — handle all my emails — that isn’t gonna work for a request like that. You can get rid of your personal assistant and just use Magic+ and it works. I do think that when you think about that, that is a pretty big difference.”

Magic also relies on on-demand services, basically offering a layer of convenience on top of using those services instead of having to dig through a user interface to complete an order. So there’s a risk there that the on-demand services can alter the way it operates that brings it more competition or exiles Magic. But in response to that, Chen said that the company works with multiple on-demand services that people might not know exist — there are hundreds around the country and world, he said — so there’s plenty of a buffer there.

TechCrunch previously reported that it had raised $12 million in a series A led by Sequoia that valued the company at $40 million pre-money. The Y Combinator graduate debuted in February last year and helped carve out a new potential market for personal assistants based on messaging. It was in a closed beta for around six months (users had to know someone already using it, Chen said) and is now opening up to people that have been accepted into the service.

“Magic+ isn’t a service that is for the elite rich to spend all their money doing their type of things, it’s much more practical than that,” Chen said. “A lot of our users are entrepreneurs, business people, that are using this for very real things.”