More consumers were unwrapping new “phablet” devices this holiday season, according to a report out this afternoon from Flurry. The big-screened form factor, whose name is a mashup of “phone” and “tablet,” accounted for 27 percent of a new device activations in the week leading up to Christmas – a doubling of its share from the year prior, and up from just 4 percent in 2013. Apple’s current “phablet” – the iPhone 6s Plus – had a big impact on these figures, Flurry also notes, accounting for 12 percent of all Apple devices activated during Christmas week.

The data for this year-end report come from Flurry’s analytics platform, and is based on the 780,000 apps it tracks across a range of devices. Because so many consumers receive new phones and tablets during the holiday season, taking a snapshot of this data can point to trends in terms of which devices and form factors are growing in popularity, as well as which manufacturers are growing or losing market share. 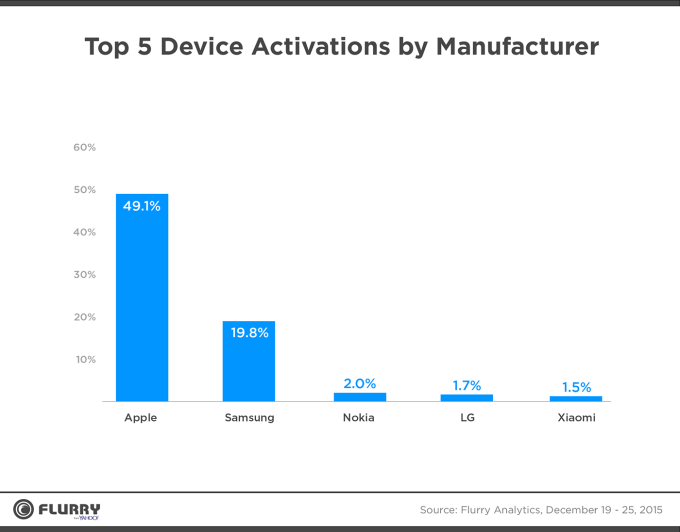 This year, the larger trend Flurry uncovered was what it dubbed the “death of small phones.” That is, for the first time in 2015, consumers appear to opting for phablets over smaller-screened phones. And phones with a screen smaller than 3.5 inches (e.g. most Blackberry devices) are practically extinct, says Flurry. The firm doesn’t even expect those devices to make an appearance on next year’s chart.

Apple’s phablet, first introduced in September 2014, is stealing share away from medium phones and small tablets, like the iPad mini. However, the popularity of Android phablets is even greater in that device ecosystem.

For the first time this year, phablets accounted for more than half of all Android devices, thanks to the popularity of the Samsung Galaxy Note and others – especially those that are popular in Asian markets. Samsung also upped its market share by 2.1 percent this year, going from 17.7 percent in 2014 to 19.8 percent in 2015, in part thanks to the new Galaxy Grand Prime, Core Prime, and S6.

And while Apple won the top spot again, with a 49.1 percent share, it’s actually down 2.2 points from last year, when it had 51.3 percent market share. And its new iPad Pro hasn’t yet had much impact on its market share, Flurry also found. The report lumps the large tablet in with others that have a 8.5 inch or greater screen size. These devices only accounted for less than 1 percent of device activations, though.

Microsoft’s Nokia lost market share this season, too, going from 5.8 percent to 2 percent in 2015, and Sony dropped out of the top five altogether. However, Xiaomi entered the chart for the first time, accounting for 1.5 percent of all new activations during the Christmas week. (This is particularly notable, as Flurry points out, because Christmas is not the biggest gifting day in China.)

As all these new devices are unwrapped and activated, one of the first things that consumers do is install applications. Because of this, we typically see a spike in app downloads in December – and these can even point to other trends, like when Fitbit hit the top of the App Store, it implies that Fitbit sold a lot of its fitness trackers during the holidays. 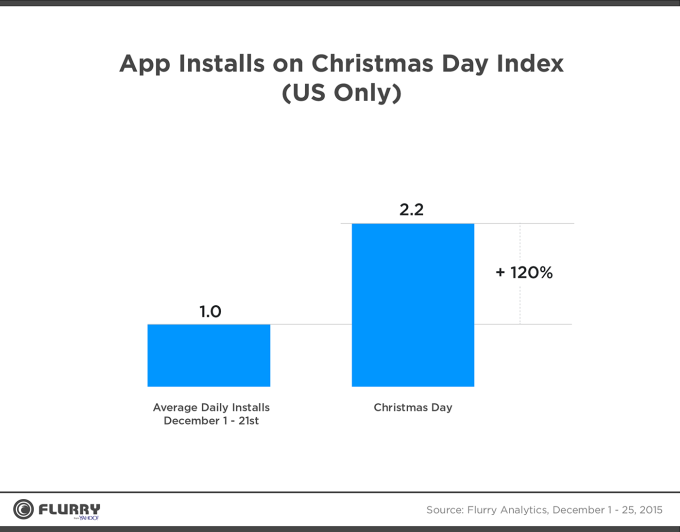 Finally, Christmas Day was once again the biggest day of the year for app downloads, with 2.2 times as many app installs registered than on an average day in December, as indicated in the chart above.