A Theranos testing center in Mesa, Arizona has informed me they are not allowed to use Theranos’ proprietary equipment to test for herpes simplex 1, the only test the FDA has so far given Theranos the green light to test on their own technology.

I’m in Arizona visiting family over the holidays and since I’m in the only state currently running tests for Theranos — the blood analysis startup worth just north of $9 billion — I thought I’d take the chance to try its wellness center.

Theranos was the subject of several investigative pieces in the Wall Street Journal claiming that the company was struggling with its blood-test technology. The company later confirmed it was only using one of the 240 tests offered on its site with its own technology – the herpes simplex 1 test.

So there I was at the back of the nearest Walgreens with a Theranos Wellness Center with my mom, ordering a herpes test. I thought to do a couple of other tests I could use as well just to get a sense for how the whole system operates so I ordered a pretty innocuous B12 test and an iron deficiency test with it. 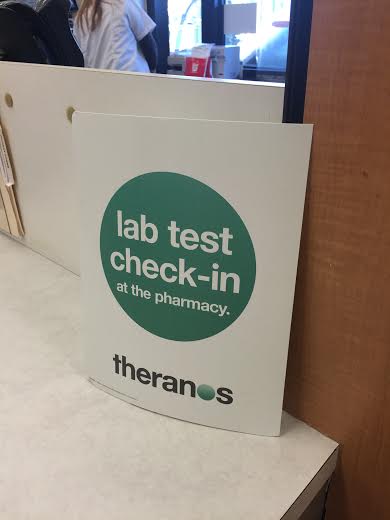 The man at the counter took my paperwork, quickly processed me in the system and walked me back to the testing room where two women dressed in scrubs were waiting for me. One of the women, Dakota, was very good at finding my vein and taking blood intravenously. Then I asked about what Theranos calls “nanotainers” or tiny vials that can give you test results with a single drop of blood.

“Oh you have to order that separately,” she informed me. “We take those intravenously if you bundle a bunch of tests together.”

“So you can’t use the technology on this order because I ordered a few tests together?” I asked. She confirmed that was the case and told me they didn’t get a lot of requests for that particular test on its own.

I asked about the test and both Theranos employees raved about the work they were doing and the technology.

That’s when things got weird. It took much longer to process this separate order at the counter. I was told it was because they had to manually type in my order on the other end.

Then I walked myself back to the testing center and could overhear one of the women on the phone with management in a panicked voice telling them I was a journalist doing an investigative piece (I wasn’t, just curious as to how it worked).

Dakota opened the door and informed me they could not use the Theranos device at this time to test on me. After a long pause, I asked if she thought that was odd. She said she was surprised and that as far as she knew they could until then because, “That’s what we’ve been told.”

She then asked if I wanted to speak with a Theranos manager to explain why I couldn’t test at this time. I spoke with Chris, the Theranos manager, on the phone who informed me it was about supplies. Okay, but the people with the supplies to administer the test seemed to think I could take it until management said they could not that day.

I reached out to Theranos head of communications Brooke Buchanan for an explanation as well. She’d already been informed I was in the store today. Instead of explaining why I couldn’t test on Theranos technology, I was asked why I chose not to go to the Theranos main office in Palo Alto for a test instead (she’d invited me to come visit after the holiday break).

Testing at the Theranos office and at a Walgreens aren’t mutually exclusive. But it is weird Theranos wanted me to test at headquarters instead of at a Wellness Center. It’s also weird the only test using the nanotainer is unavailable for testing at these centers, even though it has FDA approval.

Theranos claims it does not need FDA approval for its proprietary technology but chooses to gain approval on a voluntary basis before using it to test. However, an FDA document shows the regulatory agency found Theranos in violation of misclassifying the nanotainers and that it considered them an “uncleared medical device.”

Theranos later said it had “addressed and corrected” concerns the FDA had at the time.

Update: Theranos says it has taken a “pause” to seek FDA approval on its technology and that it is not just a company with nanotainer devices, but also uses proprietary chemistries and machinery.

Is it odd only one test has been approved so far and that you can only get it if you order it alone? Is it odd it happens to be something not commonly ordered alone? Either way, you can’t get the test using Theranos technology at this time.

I’d like to hear from readers who have tested on Theranos’ technology using the nanotainers outside of Theranos’ office. If that is you, please contact me at sarah.buhr at TechCrunch dot com