As a reminder, the 1989 World Tour film features Swift’s concert at ANZ Stadium in Sydney and many backstage clips with Swift’s entourage and guest artists. It’s a free movie, but you have to be an Apple Music subscriber.

And this is key to understanding Apple’s strategy here. According to last week’s Beats 1 interview, Apple first had the idea of this film. “They came to me and said we want to be the one to capture this tour,” Swift said in the interview.

There are three reasons why this movie is an important play for Apple. First, Apple wants to provide exclusive content to its Apple Music subscribers. You won’t find the 1989 film on Apple Music’s most direct competitor, Spotify. But you won’t see the film on YouTube either, Apple’s other music competitor.

Whether you find the YouTube interface cumbersome or not, YouTube is a dominant player in the music streaming world. Millions of people are relying on the video platform for their music needs. The top 10 videos on YouTube are all music videos. And they all have more than a billion views. By comparison, Spotify seems like a small competitor.

So that’s why Apple is taking video content so seriously. YouTube is the obvious platform when it comes to releasing a music video on the web. But if Apple can snag a few exclusive videos like today’s video, it’s a big win.

As for Spotify, Apple has been trying to differentiate itself since Apple Music launch. Apple is betting on its Internet radio Beats 1, human-curated playlists, native iOS and iTunes integrations and mini social network Connect. Spotify is betting on Discover Weekly, Spotify Party, data-and-human-generated playlists and more.

And yet, it doesn’t just stop with features. Apple and Spotify are also trying to provide the best streaming library. There are very few differences between the two services, but Taylor Swift is one of them — you can stream 1989 on Apple Music and not on Spotify. Putting her tour film front and center is a great way to remind everyone that yes, you can stream Taylor Swift on Apple Music.

This is how the “New” tab looks right now — it’s all Swift, all the time: 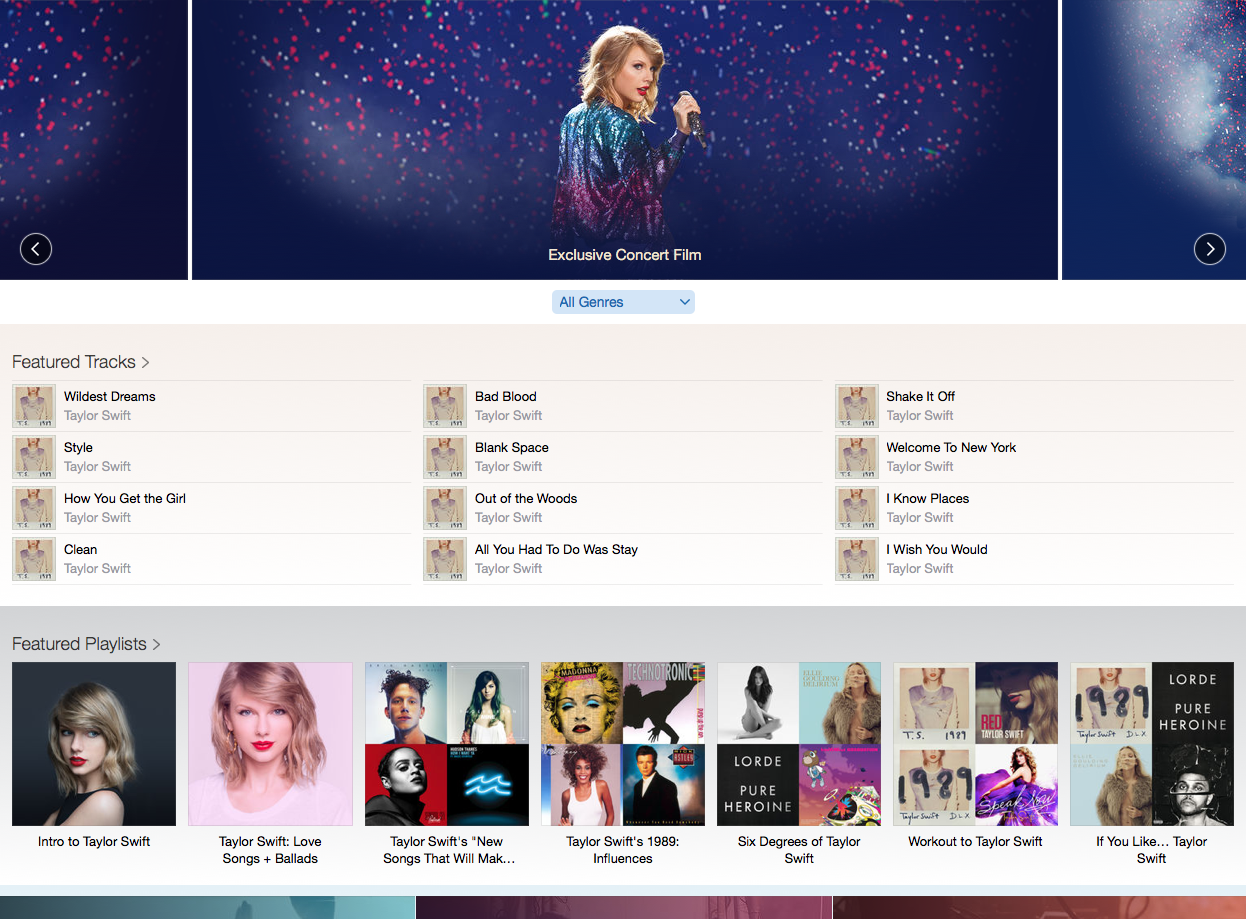 Second, the holidays are coming up! In just a few days, millions of people will get an iPhone for the first time. Many developers will tell you that there’s a big download bump on Christmas day. And it’s also true for Apple’s own services and apps.

Many will open the Music app and learn about Apple Music. Having an exclusive Taylor Swift video just in time for the holidays is a great way to make people subscribe to the three-month trial.

Third, Taylor Swift and Apple has had a complicated relationship so far. She wrote a blog post after learning that Apple wouldn’t pay royalties during the trial period. Hours after the post went live, Apple reversed its decision. She then agreed to release 1989 on Apple Music.

By staying in good terms with Swift, Apple is making a statement to the music community. She has been a vocal supporter of fair royalty payments. Apple wants to work with Swift in order to improve its relationships with artists and labels. Now if only Adele would also change her mind.