Facebook this year continued to hold the number one position as the top app installed on U.S. smartphones based on the average number of unique users, according to a new report out this week from Nielsen, but its mobile messaging application clocked in as the fastest-growing app of 2015. Having foreseen the shift from more public social networking to private communications, Facebook forced users to install Messenger in spring 2014 by ripping out chat from its main app. In the months since, the app has soared to the top of the App Store’s charts. Over 2015, Messenger grew more than any other app, the new report says – with a 31 percent increase in users from 2014.

That’s slower growth than Messenger saw in 2014, when it rose 242 percent over the year prior thanks to Facebook’s huge push. The question now will be whether or not Facebook can do the same for its next most-promising creation, the private photo-sharing app Moments which is now replacing photo-syncing on Facebook’s social network.

Also in the running for fastest-growing app was Apple Music, which saw a 26 percent year-over-year climb. However, that’s a bit of different situation from Messenger, given that Apple’s streaming music service only launched this June. 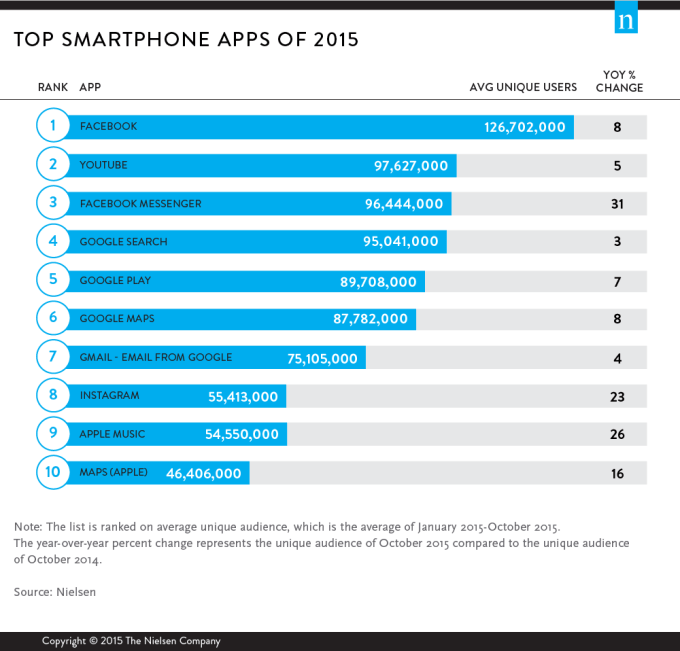 For what it’s worth, Facebook itself said last month that it had 1.39 billion mobile monthly users worldwide, up 23 percent year-over-year, and 217 million monthly actives (not just mobile users) in the U.S. in Canada in Q3 2015.

Other top apps of the year included Google (Search) with 95.0 million mobile users, Google Play with 89.7 million, Google Maps with 75.1 million, Instagram with 55.4 million, and Apple Maps with 44.4 million, says Nielsen. Instagram also saw a ton of increased usage this past year, the report indicates, growing at 23 percent year-over-year – not too far behind Apple Music.

Meanwhile, in terms of the battle between operating systems, the U.S. still slightly favors Android with a 52.6 percent market share compared with 42.7 percent for iOS. Barely 3 percent of smartphone users owned a Windows Phone device in the past year, followed by BlackBerry which somehow still managed to claim a 0.7 percent share of the market. 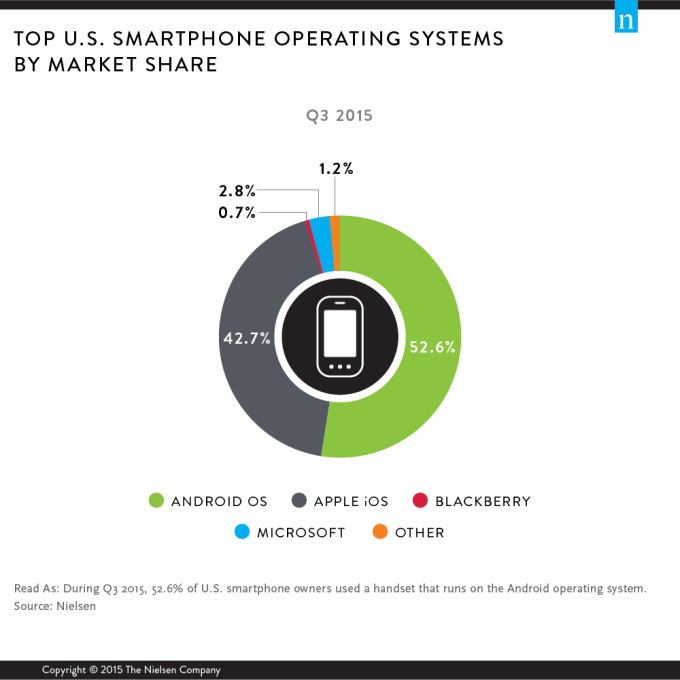 Mobile subscribers also increased a bit, with 78 percent smartphone penetration at the beginning of the year to 80 percent by the end of September.

Remember that all these stats are U.S.-only, and are based on Nielsen’s survey data of 30,000-plus mobile subscribers, a portion of whom have mobile measurement software installed on their devices. Nielsen is also skilled in making sure it has a demographically representative sampling of subscribers, of course.

Still, even though the stats are limited to one region, the larger trend involving a shift to private messaging and video streaming is something that’s occurring globally. According to App Annie’s data, for example, apps like WhatsApp (#1), Messenger (#3) and Snapchat (#8) are the top apps by downloads as of last month, and several of the top-grossing apps in the world are video streaming apps. These trends will likely continue in 2016, as more users adopt messaging applications, and the cost of mobile data continues to drop, thanks in part to free data programs that let mobile consumers stream videos for free (assuming the FCC doesn’t put an end to these programs).