Earlier this fall, an analysis of the Top Grossing apps on the iTunes App Store revealed that HBO NOW, the network’s app for cord cutters, had surged to become the top video streaming app by revenue. Now, it seems that Netflix is joining it. According to a report from App Annie out today, Netflix’s move to introduce an in-app subscription option resulted in soaring revenues on iTunes. This allowed the app to reach the No. 9 position on the worldwide Top Grossing Apps Chart (excluding games) for November.

Netflix never ranked on this list until recently, however, because it never before offered in-app purchases. That changed in September, when Netflix began accepting sign-ups from new customers within its iPhone and iPad applications. 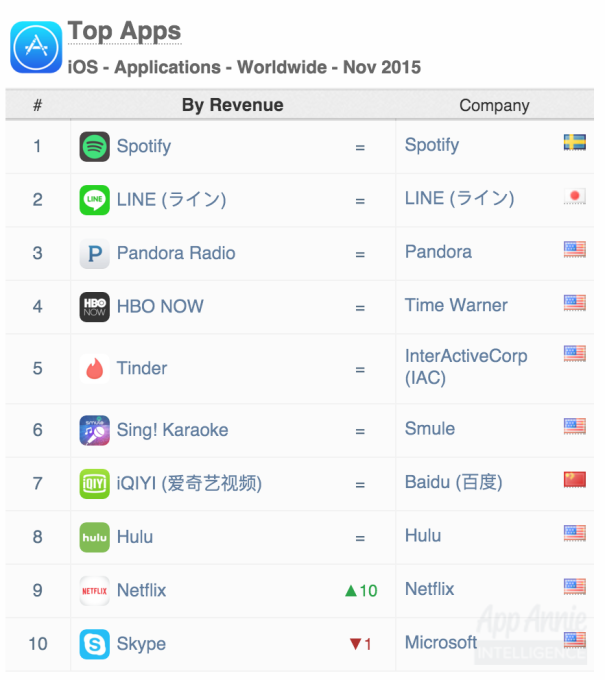 Like many companies, Netflix may have shied away from offering this option in the past due to Apple’s steep 30% cut of in-app purchase revenue. But its rivals, including Hulu and HBO NOW, were already offering the ability to subscribe in their applications, which could have led to the change. (Or, maybe that Apple TV price cut – from 30% to 15% – helped.)

In any event, it was only a matter of weeks for this change to impact the Top Grossing charts. Typically, notes App Annie, determining how well a new subscription model is working takes about a month, as most offer new customers a free, 30-day trial. Netflix added the option to pay for subscriptions in-app in late September, so those who began using at that time wouldn’t have been prompted to pay until late October. And it was then the following month that the app was seeing enough monetization momentum to actually rank on the revenue chart.

Side note: it’s also nearing time when we’ll see how well YouTube’s new subscription play, YouTube Red, is panning out. The service launched in late October, offering a one-month free trial. However, YouTube has been extending those trials for some users which may cloud the picture. 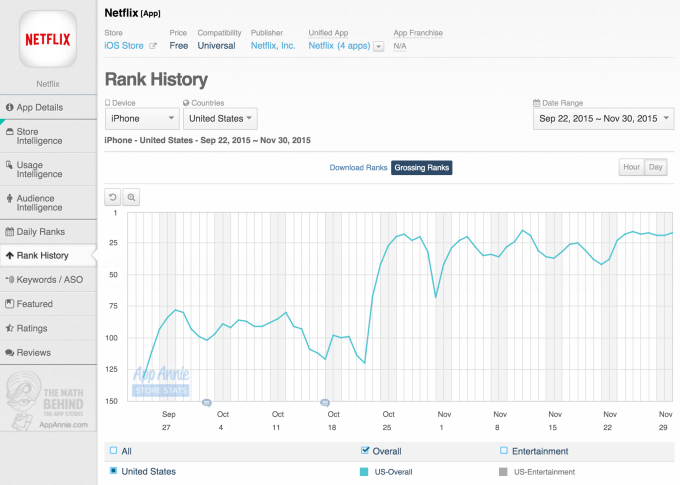 Netflix’s app is doing well, in terms of revenue, in the U.S. specifically, having steadily climbed into the top grossing ranks since the announcement of in-app purchases. That’s especially interesting given that Netflix says that the U.S. is its “largest and most highly penetrated market,” which means that its net adds year-over-year may be down in some of the quarters ahead.

According to eMarketer, the growth will come from connected TV users who began moving away from legacy technology like disc players and game consoles toward newer set-top boxes and streaming sticks.

That means Netflix’s app, along with HBO NOW, Hulu and others, is likely to remain on this “Top Grossing” chart for some time.