In the latest episode of “holy shit, how is this guy not in jail…oh, he is…cool”, the FBI was forced to make a statement about today’s arrest of Martin Shkreli for securities fraud.

In case you don’t know, Shkreli acquired an unreleased album by the popular rap group Wu-Tang Clan for $2M. There is only one copy of “Once Upon a Time in Shaolin” and Shkreli has it.

Or was it seized during his arrest?

#Breaking no seizure warrant at the arrest of Martin Shkreli today, which means we didn't seize the Wu-Tang Clan album.

This absolute genius of a person tried to cop the album in a very direct way, which might have caused the FBI to speak out:

Just FOIA'd the FBI to try to get the Wu-Tang Clan album from Martin #Shkreli – Let's party! pic.twitter.com/Dd0nxU1DwH

What are our thoughts at TechCrunch? Glad you asked: 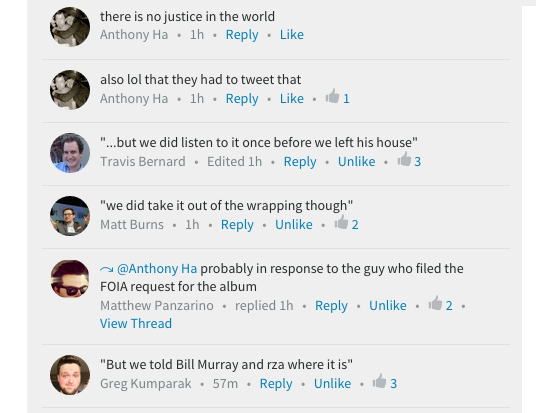 Forget the $2M, this is easily the most interesting part of the whole deal between Wu-Tang and Martin Shkreli. pic.twitter.com/5nSshXhjnJ

BONUS: Here were Alex‘s suggested headlines for this story: