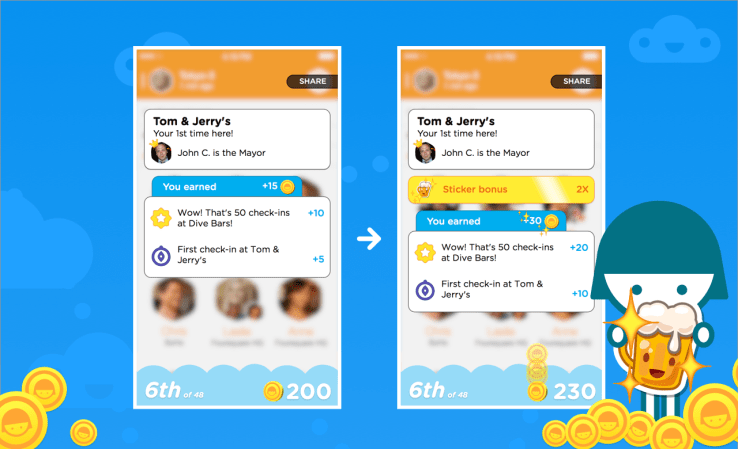 Remember when Swarm launched coins? While the reward for checking in was entertaining, the coins had no real use other than providing a measurement by which to rank you on the weekly leaderboard.

Today, however, that changes.

With the latest Swarm update, folks can use their coins to pay for sticker upgrades. Upgraded stickers yield 2X the amount of coins when used in a check-in. That said, you can only use an upgraded sticker on a check-in one time per week.

So, in other words, you use your coins to buy stickers to get more coins. And the cycle never ends.

When Swarm first launched, much of the gamification found in the old foursquare was stripped away from the app, with the company opting instead to offer more of a social utility. Swarm was meant to help friends meet up in real life.

Sure, there are plenty of users that are on Swarm to keep up with their friends or keep a record of where they’ve been. But part of the draw of foursquare badges was that people enjoyed unlocking the different badges they saw on their friends’ profiles. Over the past few months, Swarm has been working to bring that gamification back to the app.

That started with an updated sticker book, which allowed users to unlock stickers based on new and interesting check-ins. The company then re-introduced mayorships, letting users compete with the entire Swarm network to be the most ‘regular’ at a certain location. Then came coins, but with no real use case other than the friend-based leaderboard.

Crowley also said that Swarm will gradually add more and more ways to use coins to make purchases or buy upgrades.

For now, you can check out the Swarm update here.

Remember when Swarm launched coins? While the reward for checking in was entertaining, the coins had no real use other than providing a measurement by which to rank you on the weekly leaderboard. T...