These VR moments are really picking up steam, with sports leading the way. It seems like everyone and their uncle are racing to shoot 360 degree immersive video to show off virtual reality as a viable platform. The latest is SHOWTIME, and they’d like you to watch WBA Middleweight World Champion Daniel Jacobs fight Peter Quillin in VR…for free.

Here’s how SHOWTIME sets up the “first ever.”

For the first time ever, a boxing match has been released in its entirety in virtual reality, as SHOWTIME captured the shocking first round TKO from Saturday night’s main event between WBA Middleweight World Champion Daniel Jacobs’ and previously undefeated challenger Peter Quillin. The all-Brooklyn main event has been made available in 360 video from ring-side, giving fans an unprecedented boxing experience. The VR video engrosses viewers in the matchup of the top middleweights, facing off in the prime of their career, where Brooklyn’s Jacobs (31-1, 28 KOs) won the “Battle For Brooklyn.”

The fight was just 3 days ago, so it’s likely that you haven’t seen it yet. I don’t want to ruin the outcome of the match for you (it won’t take long to watch haha) but thanks to YouTube’s 360 degree support, you can now step into the ring…almost literally. I’m a boxing fan, so this one definitely grabbed my attention. I’ve long been a fan of the Rocky series just because of its close connection to the sport and the respect it pays to those who step into the ring. 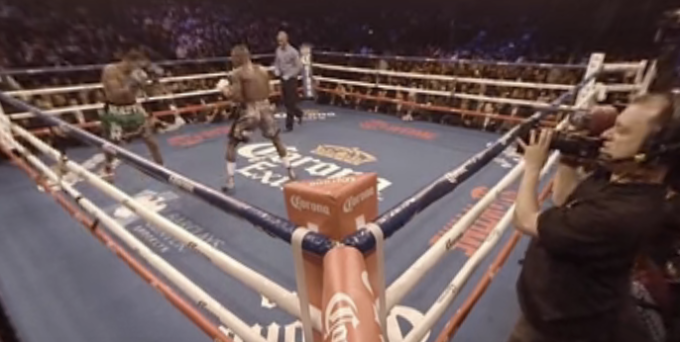 The fight was dubbed the “Battle For Brooklyn” and you can watch it on the Samsung Gear VR in the MILK VR app, grab a Google Cardboard or just watch it on YouTube and Facebook in 360 degrees. I highly suggest grabbing a Gear VR for this if you can, it’s pretty outstanding.

Now I want to see the Fury vs. Klitschko rematch live in virtual reality.