History has shown that you can’t topple email. The legacy technology invented in the early days of the net is too entrenched to be abandoned. But newer startups have found a way to at least move some communication outside of email, such as with team collaboration platforms like Yammer or Slack.

Another newcomer, called Mainframe, is launching today onstage at TechCrunch Disrupt London with its own take on email 2.0. The startup is merging some of the concepts popularized by Slack, like channels, with the ability to communicate with the world outside your office, which is email’s biggest advantage.

Mainframe co-founder Mick Hagen explains that he’s been fascinated with this idea of helping people connect in different ways for much of his life. He sold his social network Zinch, which connected high schoolers with college admissions officers and scholarships, to textbook rental service Chegg in 2011 for $45 million. The following year, he took the stage at Disrupt SF to show off Undrip, a tool to help highlight the best content in your social feeds.

In 2013, he pivoted from Undrip to create Spatch, a service focused on improving email. Initially, Hagen says, he and co-founder Ryan Johnson, previously of Zynga, tried to build Spatch on top of email.

“The heart of what we believe is wrong with email is that it’s completely unstructured,” says Hagen, adding that it’s not interoperable with other task-management applications. That means email users have to parse email manually and determine for themselves what actions they need to take based on the text in the message. 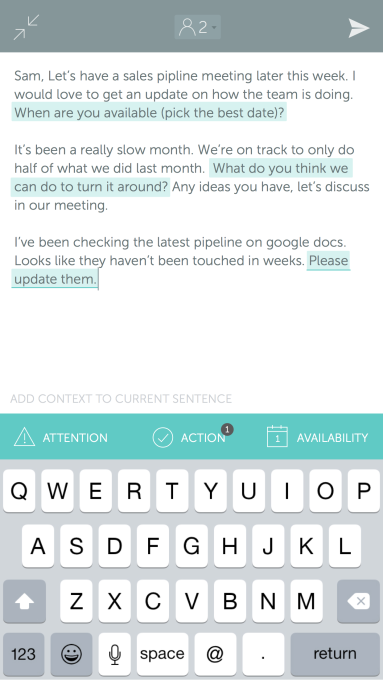 The goal with Spatch, now Mainframe, was to solve this specific problem. With the service the founders envisioned, email senders would specify the type of message they wanted to send: for example, a task with a due date; a request for an introduction; a to-do list item; a request for an appointment slot. Adding this structure up front results in better ways for email recipients to process their inboxes.

But after a year, the founders realized their original plan to build on top of email wasn’t going to work. The underlying technology – archaic, legacy protocols – made Spatch feel like what Hagen describes as “lipstick on a pig.”

So they pivoted again. The team moved to London to participate in TechStars in mid-2014, and later changed the product. It will still interoperate with email, but its “structured messaging” feature exists side-by-side with email now, not on top of it. 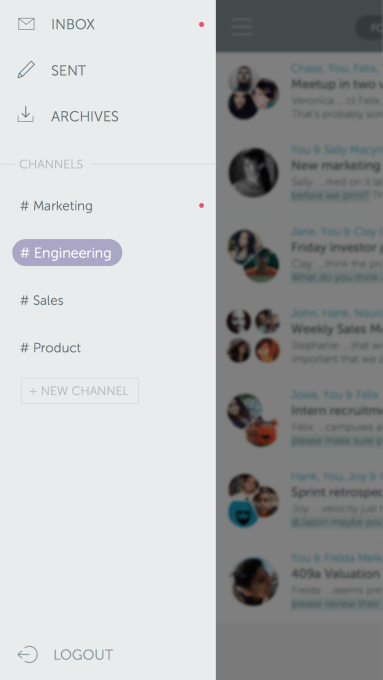 Instead, Mainframe, as the product is now called, lets you communicate within your own company much like Slack does, even copying the idea of having “channels.” But it’s also going to be interoperable with email. That is, you can create a channel where you add internal team members as well as outside contacts who don’t use Mainframe.

In other words, Mainframe works as both your email client application, as well as an alternative to Slack for internal communications. (The email interoperability piece won’t be available until January, however, Hagen says. Despite this, at least one of some two-dozen testers has already begun to pay for the service, which is sold as a traditional SaaS product – $X per user, per month.)

In Mainframe, the burden is on the sender to mark up the message to give it the necessary structure, and much of the team’s focus has been on trying to make this very simple to do.

For now, there are three buttons in the Compose screen: Attention, Action and Availability. Attention lets you highlight who needs to see this message and its related requests; Action lets you highlight action items (make a call, update a spreadsheet, etc.) called out in the email; and Availability lets you schedule meetings by having recipients pick one of your available time slots.

With the structure Mainframe provides, recipients can quickly parse their inboxes to see the main tasks they need to perform. A separate to-do list screen also lets you see items associated with particular tasks grouped together.

Of course, getting users to change their behavior is challenging – and asking senders to do the work of marking up an email may not take off without a lot of user training and a company where the new communication methodology becomes a part of the company culture. That said, Mainframe lets recipients mark up those messages that arrive unstructured if they so choose.

Headquartered in London, Mainframe’s team of 10 has raised the largest seed round in Europe, we’re told, but the company won’t say yet how much or from whom. But Hagen notes it’s a combination of institutional VCs and angels, including some investors who were founders or early employees at Salesforce, Gmail, Yammer, Twitter and more.

Mainframe is today available for public testing. It’s available on desktop for both Mac and Windows, as well as iOS and Android. The service will remain free during the trial period.