Redfin.com today launched the latest iteration of its home-price estimate tool. Until today, you had to play real estate agent and pick your own comparables and Redfin would then use these to compute a reasonable estimate for the price of the house you were looking at. Now, the company has turned on its automated home price estimates based on its knowledge of the local market and the data it gets from the various listing services in the U.S.

If you’ve looked at buying a house in the last couple of years, chances are you’ve seen Zillow’s Zestimates, which also uses that company’s knowledge about local markets to calculate an estimate for virtually every home in the country. For a long time, Redfin actually showed Zestimates on its site, but it recently did away with this feature. Now, Redfin is essentially launching its own version of Zillow’s Zestimates.

I asked Redfin CEO Glenn Kelman why the company didn’t launch this feature before. Turns out, because Redfin is a broker, it’s bound by different rules than listing services like Zillow. It gets access to the data from the multiple listing services (MLSs), but in return, it has to stick to the rules of the National Association of Realtors (NAR), which (through a series of arcane policies) basically governs the majority or MLSs (there are also a number of independent MLSs, too, though). One of these rules Redfin was bound to was that it couldn’t use the data to build a tool for automated home price estimates. The NAR finally did away with this rule a few months ago, so now Redfin is free to launch this service.

The new service will be available in 35 metro areas, which cover about 40 million homes, no matter whether they are for sale or off the market (the service isn’t available in some of the markets Redfin only entered recently because it doesn’t have enough historical data for those areas loaded into its systems yet). 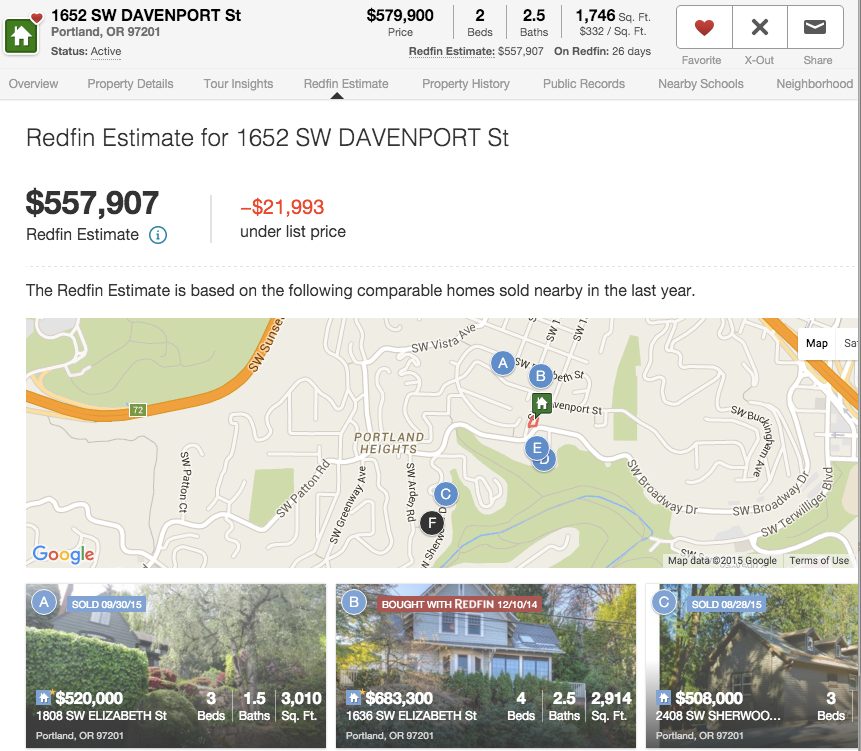 Kelman tells me that one of the other reasons Redfin can now launch a tool like this is the advances in cloud computing that have made it feasible to handle all of this data and run all of the necessary calculations efficiently. The company says its estimates have a median error of 1.96 percent for homes that are on the market and 6.23 percent for those that are not. Zillow says its estimates have a median error rate of 7.9 percent (though this also changes depending on the geographical area).

None of these automated tools can take things like the style of the home (which may — or may not — be in fashion at any given time), the quality of the kitchen remodel and landscaping, or all of the vagaries of the local market into account, of course. Redfin, however, argues that its status as a broker gives it information about homes that other listing services don’t have, which should make its estimates more accurate. This includes whether a house has a view, for example, or whether it’s on a busy street. Kelman tells me the company has also tuned its algorithms for every market.

In comparing Redfin’s and Zillow’s estimates in my local Portland market, Redfin typically seemed to have lower — and often more realistic — estimates than Zillow for the roughly a dozen homes I looked at. Strike that: Redfin publishes its numbers here.