Staffly, an online retail staffing company that appeared in the TechCrunch Disrupt Battlefield competition in September, announced that it has received $1.25 million in seed round funding today.

ff Venture Capital led the round with participation from existing shareholders LionBird, Three Fish Capital and WS Ventures. Today’s investment brings the total to just around $2 million, according to the company.

Staffly provides vetted staffing for retailers. Founders, the husband and wife team of Bjorn and Marissa Ovick, recognized that independent retailers had a hard time finding, training and keeping qualified staff and they came up with an online service to help. 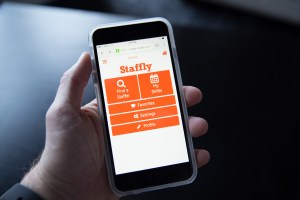 The way the service works is that people sign up for work and businesses sign up who need workers. Staffly takes care of the hard work of finding qualified people and acts as the employer, interviewing prospective employees and handling the paperwork, timesheets and payment processing.

All the retailer has to do is find a good match on the website or in the mobile app, and send out a text to the person looking for work. If a person makes themselves available for a block of hours, they are obligated to accept.

Each party can rate the other, so over time employees will know good places to work and the employers will know who is reliable. It would seem everyone wins.

The company used its first seed round to build the program in San Francisco and work out the initial kinks. Now that they have proven the concept, the next step is to scale it further, says co-founder Bjorn Ovick.

The company currently has several hundred staffers and a hundred retailers in the inaugural San Francisco market.

With the new money, they are targeting an unnamed second market with the idea of proving that the company has a sustainable business model, Ovick explained. The goal is eventually to expand to multiple cities, but they plan to move slowly and make sure they grow at a sustainable rate, he said.

The founders have been tweaking the hiring process to keep the number of personal contacts to a minimum and using the phone and online tools to the extent possible.

“We have hired a senior recruiter to prove our processes were sound,” Marissa Ovick, who has a background in HR, told TechCrunch. The company is only hiring 10 percent of the people who apply and it has a healthy pipeline of candidates, she said.

The plan is to build on that and find recruiters to run the hiring programs in subsequent markets.

With the holidays, this will be a big test for Staffly, but Bjorn Ovick says it’s more important to establish strong relationships with both retailers and employees, then it is to gear up for one busy season. If the system is sound, then staffing for the holidays shouldn’t be a problem.

It’s still early for the company, but with the money from this round of funding, they can work on expanding their initial vision.