After the sweating toil of transforming a hardware prototype into an actual shipping product, the makers of a $299 kit laptop called Pi-Top are crowdfunding their next project. And this time they’re aiming to package the low cost Raspberry Pi microcomputer into a far more affordable form factor. Meet the $99 Pi-TopCEED: a desktop computer powered by Pi — just add your own keyboard and mouse.

Why make a Pi desktop in an era of increasingly mobile computing? The main bit of criticism aimed at the Pi-Top laptop has been its price-point, says co-founder Jesse Lozano. “People were saying… I’d just like something that could make my Raspberry Pi work, for like $100. Or for like $150. There’s just no way you’re going to make a good quality laptop for that kind of money.”

So instead, Lozano and his co-founder Ryan Dunwoody decided to focus on making “a really functional desktop” — and Pi-TopCEED is the more affordable result. So far, on Indiegogo, the team has nearly tripled its initial $50,000 crowdfunding target, still with more than a week to go. So they’re not short of pledged funds to turn their prototype into shipping product next April.

“The conversion rate for Pi-TopCEED is four times higher than it was for Pi-Top. So I think the price-point is really doing what I wanted it to do — and that’s get people who are interested in making, but don’t really know how to get there and they don’t really want to spend too much money on it. But they’re happy to spend $99 on a cool looking desktop and try it out,” he adds.

Hardware and software designed for tinkering

The Pi-TopCEED is designed to stand on a desktop, housing the Pi in a rectangular casing that comprises a 13.3in HD screen; a front-loading panel where the Pi sits mounted on a rail for easy access, along with any other hardware components you might want to add; and a stand at the back so the screen can be positioned at different viewing angles.

Add on bits of hardware can include a set of speakers, so the Pi-powered desktop becomes a little more fully featured. Or a breadboard for playing around with electronics, which will, in turn, plug into a software learning environment the team is also creating for the device, so users can use the Pi-TopCEED to learn about hardware making. (They will also be offering a software emulation environment for electronics — so you won’t need to buy any extra hardware to learn how to prototype your own gadgets, unless you really want to.)

As with the Pi-Top, the Pi-TopCEED is powered by a dedicated OS, called Pi-TopOS, which adds a user-friendly layer to simplify the Raspberry Pi computing experience. Such as, for instance, adding a battery life read-out.

It’s our personal goal that if you play our game for between three and six months… you’ll be able to get an A in your GCSE computing curriculum.

“We do some things that have never been done before with Raspberry Pi. And need to be done — just small things that make it completely user-friendly. So when you turn a Pi-Top or a Pi-TopCEED on or off you don’t have to do safe shutdown, like you would normally do with a Raspberry Pi. You just click a button and it turns off. And it runs through the safe shutdown for you,” says Lozano.

“When you want to change your desktop around you can easily change your background, and personalize it like you would any other computer device. But you can’t do that with Raspberry Pi so easily, so it’s all there in our operating system.”

The Pi-TopCEED’s flagship bit of software will be a gamified educational environment called CEEDUniverse. Gamified in the literal sense in that it’s actually a game — a massively multiplayer online role-playing game, no less, capable of supporting as many as 3,000 animations on the screen. 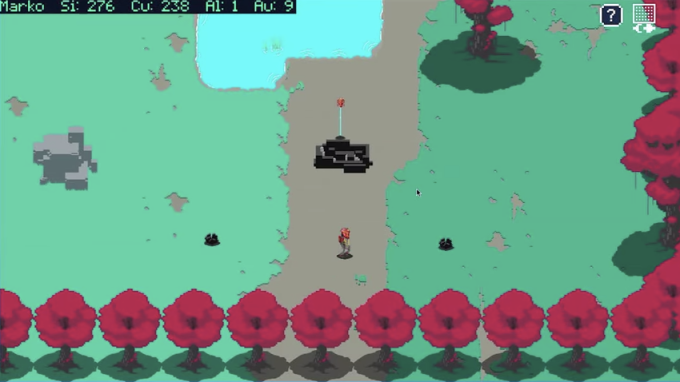 The game is inspired in part by the many hours of Lozano’s youth spent playing World of Warcraft. So with this device kids will be able to tell their parents they are doing their homework and playing a Civilization-style MMORPG. That, my friends, is progress…

“I used to play World of Warcraft. It almost pains me to admit it but in three years I racked up 540 days played on WoW when I was younger,” says Lozano. “I’m trying to take all that amazing lore and really engrossing story that comes from games like Warcraft and Starcraft and other beautiful games like Bethesda’s game series, like BioShock, Fallout, they all have these amazing stories… The next [CEEDUniverse] game release is going to have a lot of lore behind it. But that lore is integrally linked with coding and practical computing skills.

“It’s our personal goal that if you play our game for between three and six months — it depends on how quick you are — that you’ll be able to get an A in your GCSE computing curriculum. So we’re really not messing around. We’re saying we genuinely want to teach you practical skills.”

And before you ask, there will be no DLC. No subscription required to play the game. The game itself will be entirely free to play. The team is planning to monetize via its core Pi case hardware and additional hardware add-ons, such as breadboards or the $15 aforementioned speaker kit. And perhaps also in future some cloud saving options so users can have a cloud backup in case their SD card corrupts. But not by pushing any in-game purchases.

“The game will always be free. You can quote me on that,” adds Lozano. “I want it to be an ultimate learning resource.”

Hardware is hard — but easier second time around

If you’re concerned about whether this crowdfunded hardware project will deliver on its promises, because, let’s face it, many hardware crowdfunding projects haven’t — including some very high profile campaigns of late — then your calculated risk in pre-ordering a device that doesn’t exist yet is less risky here than it might otherwise be. Because this is the London team’s second crowdfunder, after successfully shipping similar hardware from an earlier campaign.

That means they’ve established manufacturing relationships and have supply chain expertise under their belt, as well as actual shipped Pi-Top laptops in the wild to point to. So although there was a delay of around four months on the original Pi-Top project shipping, vs the team’s initial estimate, Lozano says he’s confident they have all the pieces in place to avoid such delays second time around.

“We control our entire supply side. And in fact we built our production line from the ground up, so it’s a completely modular production line,” he says. “We’ve been working really hard to shore that up as a hardware company — that’s what people often worry about. But… most of the team has a Masters in engineering from somewhere. So we’ve been working real hard to make that as efficient and as smooth as possible.”

My co-founder Ryan lived in Shenzhen at the assembly point in our factory for five months to make it all happen.

“My co-founder Ryan lived in Shenzhen at the assembly point in our factory for five months to make it all happen,” he adds. “He went out there all clean shaven… and he came back with a massive beard! So when you live out there… for that long, talking to your manufacturers and everyone who’s involved in the process — literally hundreds and hundreds of people — we were able to get really excellent relationships with start of the supply chain manufacturers.”

The Pi-Top shipping delays boiled down to inexperience-related factors such realizing it would not be possible to use certain off the shelf components, as they’d originally thought they could, says Lozano. Instead they ended up developing their own battery pack, for example, which added time to the development schedule. They also decided to boost the quality of the case, stepping up to six mould design and having to make structural changes to the product as a result.

“We learnt a huge amount going through the whole process, from industry standards down to how do you source components and make sure they’re not end of life — so we only deal with manufacturers; we don’t deal with in between traders,” he adds.

They’ve built and shipped 1,300 Pi-Tops so far — with another 2,000 due to be shipped in time for Christmas and rolling production of the laptop set to start next year. “We’re currently negotiating some large global distribution agreements. That should be in place quite soon I hope,” he adds. “The first batch of Pi-Tops was 1,300 laptops. We’ll be making ten times that amount next year at least.”

There are now a LOT of interesting devices and services in the learn-to-code space. More than enough to turn into a Gift Guide listicle for people wanting to inspire kids with an educational computing/electronics gizmo, for example. But despite the crowded character of the space, Lozano reckons Pi-TopCEED still has an edge over rivals.

For example, he argues it’s better value than (also) London-based, Pi-powered learn-to-code computer kit Kano, noting that the full $135 (post-crowdfunding) retail price for the Pi-TopCEED will undercut the cost of the Kano kit ($100) plus its add-on 10.1in screen kit ($130) — so buyers will be getting a desktop Pi with a larger screen for close to half the price of the Kano alternative. 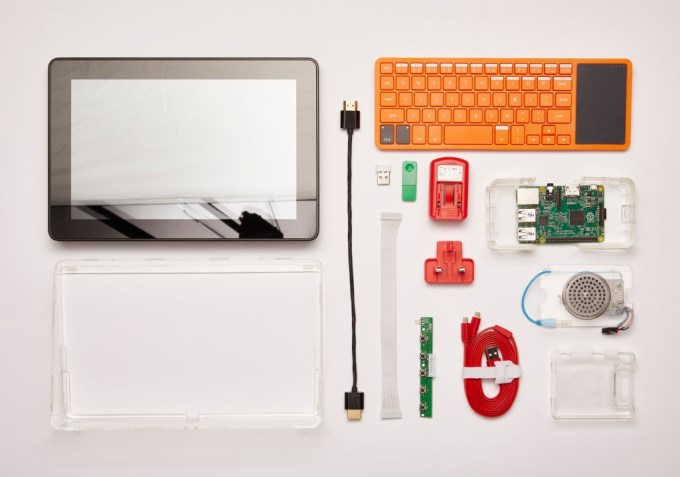 Another differentiating factor, as Lozano tells it, is a focus on teaching “real computing” — so the CEEDUniverse environment is aimed at getting kids coding in Python, rather than just fiddling around with drag-and-drop prefabricated code blocks. (Although, that said, Kano’s learning environment is also tiered — so it’s possible to graduate from its visual drag-and-drop interface to making changes to actual code too.)

“I think there’s a big different between teaching primary level education and what we do — we teach pre-GCSE, GCSE and A-Level computing and engineering. So when you’re playing the CEEDUniverse game you’re actually learning — genuinely — how to code. It’s not just play-play,” adds Lozano.

“You start off with drag and drop style interfaces then you move on to pure text-based interface, for your coding elements. So, for example, when you build a robot in our game you’re not just snapping together some red brick in Minecraft that doesn’t make any sense in the real world… You’re actually building a real robot. So the circuit board that you put together in the game — that is the circuit board that a Pi-Top robot works with.

“When you code that robot in the game, with our beta release of the game in early 2016, you’re going to be able to import that code or just stream it straight to a robot and it will do it in real life.”

One thing Kano does have going for it at this point is significant VC backing — raising a $15 million Series A in May this year. The Pi-Top team have much leaner resources at their disposal right now. They’ve been getting by with bootstrapping, crowdfunding and pre-orders, and some £150,000 in SEIS funding (plus a bit from Entrepreneur First, where the co-founders met) thus far — with Lozano and Dunwoody surviving, in the early days, off a lot of “pasta and tomato sauce”.

But the team is set to slot a big funding piece in place soon too, according to Lozano, so Kano will surely be keeping a close eye on these guys. “We’re just about to close on a much larger round — a seven-figure type size. With European investors,” he tells TechCrunch.

“It’s taken us a while to get to this point but with hardware companies I think you have to prove a lot more than software companies. But ultimately I actually think it’s a pretty good thing — because it makes you work that extra bit harder to make sure that all your processes are actually in place, in terms of everything you’re making. And how you scale,” he adds.