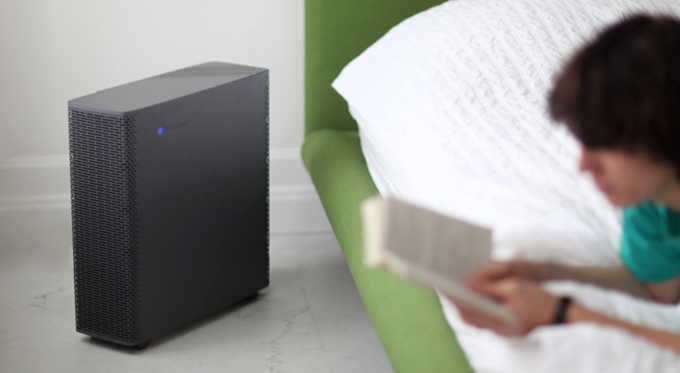 I’ve had the chance to spend the last couple of months with the Sense+ and Aware sitting in my bedroom and I can say they’ve been a pair of pretty helpful, yet unassuming, roommates. Now, I’m not living in an area where there’s regularly a ton of smog pollution, but for some reason the old apartment I’m living in is chronically dusty, which is generally annoying. The Sense+ has noticeably taken care of the air quality without reminding me about it with the deafening whirring noise most air purifiers create.

Air purifiers aren’t products I would necessarily go out of my way to call sexy, but the Blueair Sense+ is unassumingly well-designed to the point that people haven’t been left asking “what the hell is that?” when they see it sitting in my apartment. Its build quality is stellar, it isn’t too large and the touch controls on the top of the unit are pretty futuristic feeling.

Herman Pihlträd, Blueair’s President, said the company’s emphasis on design is no mistake and has really been essential in its history. He said Blueair has always looked to avoid selling consumers “large plastic boxes,” and has instead strived to create products that have gone on to win design awards.

Design is one thing, but nobody buys air purifiers just because they look good. Fortunately, the team at Blueair has continued to really focus on improving performance and the noise levels of its purifiers.

The company says its HEPASilent filtration process captures 99.97 percent of particles in the air, with air flow 60-70 percent better than most competitors in the space. Blueair’s website says the filters on average need to be replaced just about every six months.

Working alongside the Sense+ is the Aware, a separate, cool little sensor that monitors air quality and gives you a snapshot of what you’re breathing.

Both of these connected products are managed through the Bluair Friend app, which lets you check in on some clean air metrics like particulate matter concentration, carbon dioxide levels and humidity, while also acting as your remote control for the Sense+, allowing you to adjust the intensity of the fan or enable Auto Mode.

Auto Mode is an awesome feature which links the Aware and Sense+ and really lets you stop worrying about air quality, as the Aware measures air purity and adjusts the fan levels of the Sense+ accordingly.

The Aware and the Sense+ are available at Bloomingdale’s and sold separately at $199 and $499 respectively, but if you want the full benefits of Blueair’s connected platform you really do need both. Without the Aware, all the Wi-Fi capabilities of the Sense+ offer is the ability to adjust its fan strength via the phone app. Meanwhile the Aware is left only giving air-quality measurements, which other sensors can do at a much lower cost.

The real highlight is how effortlessly these products work together. When you have problems like asthma or live in a city with serious pollution problems, air quality is something you have to be concerned about all the time. What’s awesome about these products from Blueair is that you don’t have to think about how the product is working after you set it up. Auto Mode keeps the air levels in check and quiets the fan speed when everything’s looking good.

It’s an expensive duo of products, no doubt, but in a world full of clunky, loud, cheap air purifiers, Blueair is selling connected devices that are well-designed and won’t require too much concern on the part of the user.