Ophir Tanz Contributor
Ophir Tanz is the CEO of GumGum, an artificial intelligence company with particular expertise in computer vision. GumGum applies its capabilities to a variety of industries, from advertising to professional sports across the globe. Ophir holds a B.S. and a M.S. from Carnegie Mellon University and currently lives in Los Angeles.
More posts by this contributor

Social media has been playing an increasingly critical role in political elections. The 2008 presidential election, dubbed the “Facebook Election,” was the first time voters could view and share debates, interviews, commercials and statements on-demand. 2012 saw the evolution continue with Barack Obama utilizing social platforms to not just distribute his message, but actually engage with people.

At this time, visuals didn’t play too big of a factor since Instagram and Pinterest were still in their infancy and Twitter had not yet fully integrated visuals. Over the past few years, however, people’s desire to communicate visually has caused these platforms to explode in popularity. Empowered with the ability to share images such as memes and GIFs, voters today can distribute images to millions of people worldwide, and the impact that this is having on the 2016 race is already being felt.

The visual web has recently been defined as a social media phenomenon derived from cameras on smartphones and the rise of photo-sharing sites such as Pinterest and Instagram. Technology has evolved to the point now where users have the ability to create and share images with ease. With over 2 billion images shared every day, it’s safe to say that this is not just a fad.

Images have always been the preferred platform of expression for the masses. Even prehistoric man painted on cave walls to express how he saw the world. Images provoke a more immediate emotional reaction than text due to the brain’s incredibly efficient image recognition ability.

MIT researchers have found that humans can process an image in just 13 milliseconds. To compare, this is 60,000 times faster than text and it takes 100 milliseconds just to blink, so it’s no wonder people on the whole prefer to intimate their opinions with images. The technology available now gives them the tools to do so easily and then share those images to millions of people.

In the context of the 2016 presidential race, the visual web gives voters the chance to show the world how they view candidates. Instead of writing a status update proclaiming a political opinion, people can now share memes of candidates to show people what they think of a candidate or an issue, which is arguably as valuable as first-party voter files.

As millennials make up a greater part of the voting population, the role of the visual web will only increase. According to our recent research, nearly 60 percent of the images shared across Twitter, Instagram and Facebook about the two leading Republican and Democratic candidates (Clinton, Sanders, Trump and Carson) don’t contain any text or comments calling these candidates out by name – they’re purely image-based.

Mobile apps give users the ability to make memes easily and now you can even Photoshop pictures on your phone, uploading and sharing them to social platforms in an instant.

On the surface, it may be tempting to scoff at the value of memes and GIFs when it comes to the election. Yet the phenomenon is important because it provides us a glimpse of how candidates are viewed through a specific person’s eyes, at scale. People want to be empowered with the ability to share their opinions with others, and the massive popularity of platforms like Instagram are evidence that they prefer to do so through imagery.

It also provides candidates with a more intimate look at how they are viewed by the people and how to connect with them.

For instance, our analysis of images posted to leading social platforms show that Bernie Sanders has the least amount of negative images posted about him, with the majority (69 percent) of posts coming from males who are 18-24. 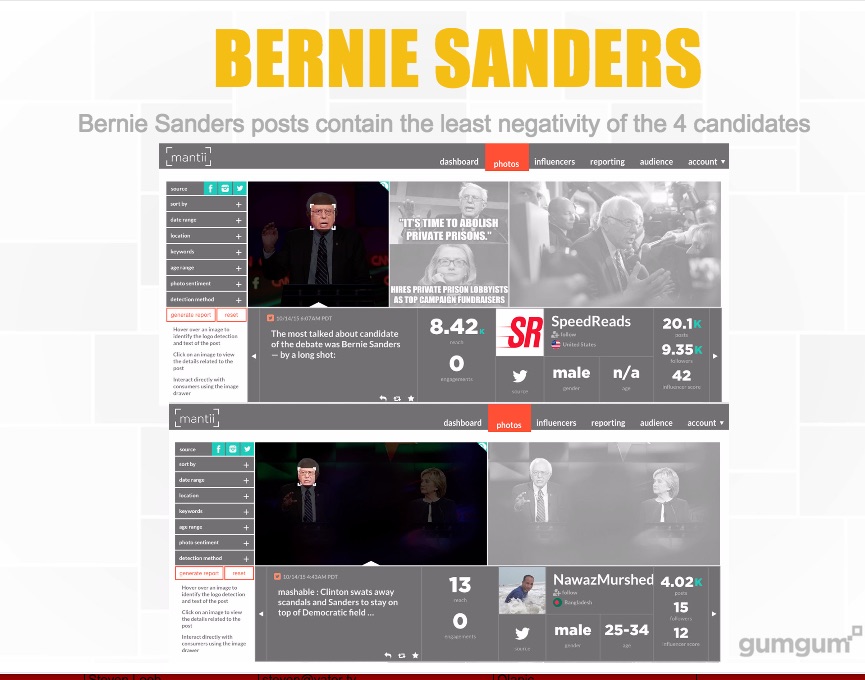 Inversely, despite Trump’s large poll numbers, out of the leading candidates, he has, by far, the most amount of negative images posted about him by a much wider range of age groups (49 percent are between 18 and 49). 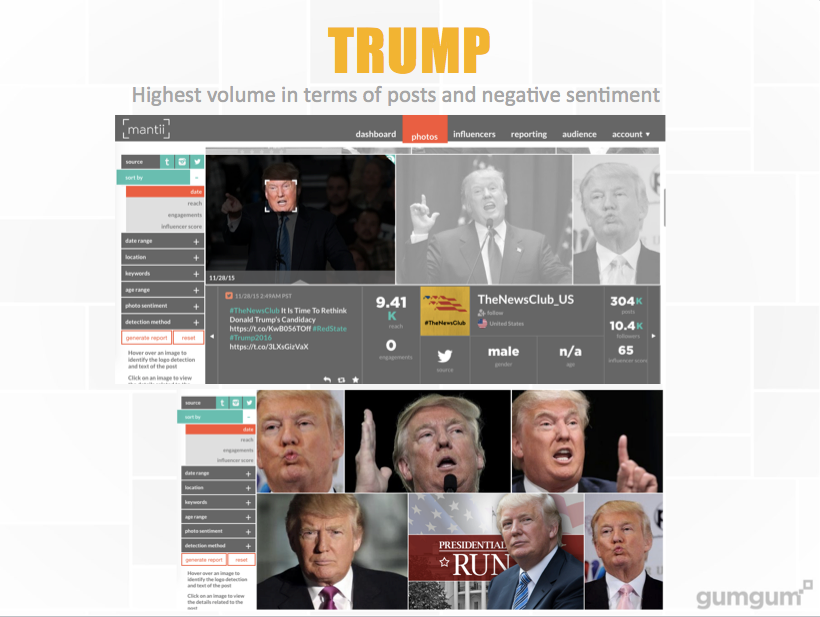 Using images and memes can also make a candidate more popular with people. All the GIFs coming out starring Hillary following the recent Benghazi hearings, prompted the question to be asked in a Medium post if her behavior was a strategy “cooked up by her yet-unknown Lead GIF Advisor.” Not to mention the sheer entertainment value of quality content.

The visual web is playing an important role in the 2016 presidential race. As the election continues, more visual content will be created, posted and shared. The candidate that ignores it might just end up in the same boat that Sarah Palin was put in by YouTube.