This is the time of the year when you see a million “how to survive the holidays with your family” guides appear. Even for people who actually like their relatives, Thanksgiving is often so hectic it’s hard to actually sit down and have a real conversation. StoryCorps wants to overcome that hurdle with the ambitious Great Thanksgiving Listen, its largest oral history project so far.

Since 2003, the non-profit has gathered over 63,000 recorded conversations, which are stored in the American Folklife Center at the Library of Congress. Now its goal is to more than double that number over the weekend. Participants can record guided interviews with one another on StoryCorps’ app, which launched in March, and then choose to upload their recordings to its website and archives.

While anyone with a smartphone can participate, the goal of the Great Thanksgiving Listen is to encourage high school students to ask their grandparents or other family members in-depth questions about their life while spending time with them over the holiday. StoryCorps has partnered with school districts in Atlanta, Chicago, Boston,Washington D.C., Los Angeles, and Philadelphia to incorporate its app into classroom curriculums (a guide for educators is available here). 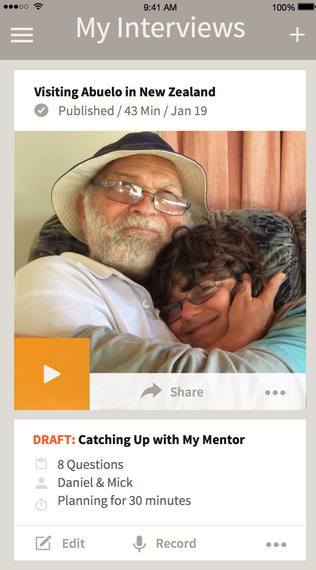 Radio producer Dave Isay founded StoryCorps to capture the experience of people whose stories are often left out of traditional history tomes. For over 10 years, StoryCorps’ has facilitated interviews at its professional recording booths in four U.S. cities. The app, which the organization was able to build after receiving a $1 million TED Prize, allows StoryCorps to bring the project to participants throughout the rest of the country.

Using the StoryCorps app is different from simply using a recorder while having a conversation because it suggests questions and acts as an icebreaker, helping people cover topics that don’t usually come up in casual chats. People who want to use the StoryCorps app to conduct an interview but are concerned about privacy can opt out of publishing their recordings. In that case, the file will remain on their phone, but won’t be uploaded to the Libary of Congress’ archives. Files that have already been published can be deleted through StoryCorps.me.

StoryCorps says it hopes to make the Great Thanksgiving Traditional an annual tradition and expand it to more U.S. schools. It recently received a $600,000 grant from the Knight Foundation to add more features to the app and organize partnerships with community programs.